The W212 and S212 Mercedes-Benz E-Class series is the fourth-generation of the E-Class range of executive cars which was produced by Mercedes-Benz between 2009 and 2016 as the successor to the W211 E-Class. The body styles of the range are:

Coupé and convertible models of the E-Class of the same vintage are W204 C-Class derived and known as the C207 and A207, replacing the CLK-Class coupé and cabriolet. A high-performance E 63 AMG version of the W212 and S212 were available as well since 2009. In 2013, a facelift was introduced for the E-Class range, featuring significant styling changes, fuel economy improvements and updated safety features.

After being unveiled at the 2009 North American International Auto Show to invited members of the press and put on public display at the 2009 Geneva Motor Show,[4] it was introduced in March 2009 for Europe and in July 2009 for North America in the saloon body style. In 2010, an estate body style became available to all markets, though the estate body style was available in Europe since August 2009. Global cumulative E-Class sales reached the milestone 550,000 vehicle mark in July 2011.[5] Production achieved the milestone 500,000 saloon unit mark in March 2012.[6]

Design work began in 2004 after the development programme commenced in 2003, with the exterior design by Winifredo Camacho and interior design by Thomas Stopka being selected in 2005.[7] After refinements and engineering considerations were made, the final design specifications were frozen in 2006. Certain elements of the exterior styling are taken from the preceding W204 C-Class and W221 S-Class each designed in 2002 and 2003. The bulging rear wheel arches are meant to be reminiscent of the fender flares of historic "Ponton" Mercedes models of the 1950s. The design of the W212 and C207 E-Class was previewed by the ConceptFASCINATION design study in September 2008.

The W212 E-Class saloon was unveiled at the 2009 North American International Auto Show. The saloon went on sale in Europe in March 2009 as a 2010 model year automobile.[8] The W212 E-Class has 3 trim levels of equipment and equipment levels: Classic, Elegance and Avantgarde.[9]

The 2009 E-Class’ design was inspired by the new design language Mercedes adopted at that time for the C-Class, S-Class, and CLS-Class.[18] The design was considerably more angular and aggressive than its predecessors and Mercedes gave the rear haunch a bulge that they named the "Ponton flare" inspired by that of the Ponton cars from the 1950s and early '60s.[19] Many of the changes made to give the E-Class a sportier appearance took design cues from a number of existing models, including the CLS-Class and the S-Class. The rising character line of the 2009 E-Class was inspired by the S-Class, as were the wheel-arch extensions, the door handles, and the enlarged bumpers. Meanwhile, the CLS-Class inspiration came in the form of the re-shaped headlights, featuring an edgier squared teardrop design as opposed to the previous ovoid shape. Other changes made on the 2009 model included a wider-framed grille, new air intakes, and an overall wedge-shaped profile.[18] The 2009 E-Class has a drag coefficient of 0.25 to improve aerodynamic efficiency.[20] 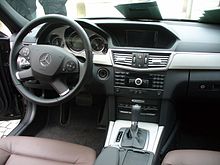 The fourth generation E-Class (W212) facelift was unveiled to media in December 2012 ahead of its public debut at the 2013 North American International Auto Show, it was made available for sale in early/mid 2013 as the 2014 model year.[21][22] Compared to typically subtle Mercedes-Benz minor model updates, the changes to the W212 were relatively extensive.[23] With the sales the E-Class had lost to SUVs and crossovers in Europe and America more than compensated for by demand in emerging markets,[24] it received the "most significant model revision" Mercedes-Benz had ever undertaken,[25] reported close to €1 billion into the development of the mid-cycle refresh. The amount of new features on the facelifted model is about the same that's expected from the release of an entirely new model.[26] The facelift brings significant styling changes, improved engines, more standard equipment and several extra hi-tech features.[27][28]

The front was completely restyled, giving it a more aggressive look compared to the pre-facelift model in response to the newer BMW 5 Series and Audi A6. The twin headlamp design was replaced with a singular front light (marking the end of Mercedes's dual headlamps use), while the light elements within the headlamps helped to retain the "four-eyed" appearance. Low beam and daytime running lamps both came with partial LED as standard, while full LED technology was available as an option for the first time.[29] The hood, with new flowing lines, and the front bumper, which was made sharper with bigger air intakes, were also completely redesigned.[30]

In the rear, the LED taillights were given horizontal design, while Sport models featured exposed dual exhaust pipes.[31] The doors and front fenders were re-shaped, eliminating the wheel arch bulge and replacing it with a more traditional character line in the sheet metal. The lower side crease line (which replaced the pre-facelift model's side chrome trim) extends from the rear door all the way to the front fender, hence all the side panels except for the rear quarter panel was also restyled.

The facelift could be ordered with two distinct design variants: Sport and Luxury, which featured two different front-end designs for each line.[32] The Luxury version came with the classic saloon grille with 3-louver look and star on the hood. The Sport version featured the sports grille with integrated star, also a first time option, forming a visual link to the high performance sports car models.[33] Sport models receive a more confident front design, using the AMG styling package that features larger air intakes and a distinct aluminum trim line along the entire lower rim of the front bumper.[30]

The interior of the mid-cycle refresh had been minimally restyled.

The car's interior cabin was subtly revised, with the new 3-tube instrument cluster, trapezoidal head-unit display, air vents design and a new analogue clock in the center console between the two central vents, like the CLS-Class (W218).[30] A new feature was the two-part trim which stretched across the entire dashboard, available in a wood or aluminium look, irrespective of the equipment line.[31] There was also a redesigned centre console without a selector lever (saloons had already done away with the selector lever as part of the launch of the W212), as well as a new multi-function steering wheel with DIRECT SELECT lever and shift paddles in conjunction with the automatic transmission.[30] If the driver had shifted up or down manually, after a set period of time the transmission would independently switch back to automatic mode to save fuel.[31]

The E-Class benefited from new safety features derived from the 2014 S-Class, including the stereo multi-purpose camera which enabled the car to detect oncoming or crossing traffic, pedestrians and traffic signs up to 50 metres away.[34] 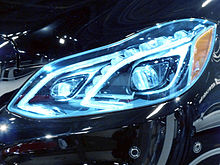 Full-LED headlamps with Intelligent Light System and Adaptive Highbeam Assist PLUS on the 2014 E-Class.

The Intelligent Light System with Adaptive Highbeam Assist PLUS used radar and stereo cameras to detect oncoming cars and operated on high beam while blanking out a section of light around them. The same system also identified pedestrians and could flash light specifically on them.[36]

U.S. National Highway Traffic Safety Administration (NHTSA) crash testing of the 2014 US model year E-Class yielded a four-star driver and four-star passenger rating in the frontal-collision test (out of five stars). Side crash results were five out of five stars for both front and rear seats. The car scored five stars in rollover testing.[44]

The E-Class image suffered a downturn in the late 1990s and early 2000s. Things improved with the facelifted W211 but the introduction of the W212 series re-established the E-Class's original reputation for solid build quality and refined elegance.[45][5] The W212 was also praised for having a differentiated design from the contemporary C-Class and S-Class models.[46][47] Although the mid-cycle refresh was overwhelmingly praised,[48][49] the design received mixed opinions as Mercedes decided to take a more streamlined direction with the redesign; replacing the twin headlamp design with a single lens design, which brought the E-Class design up to date with the ongoing F800 Style design language found on cars like the A-Class, B-Class, C-Class, S-Class, CLS-Class and M-Class.[31]

The E 63 AMG saloon was unveiled at the 2009 New York International Auto Show.[50] The new performance version of the E-Class is fitted with the same powertrain as the SL63 AMG, including AMG's 6.2-liter V8 and the SPEEDSHIFT MCT 7-speed sports automatic transmission with four driver-selectable modes including a fully manual mode. Similar to the C63 AMG, the new E 63 is more extensively modified than before, with a new, wider front axle, heavily revised suspension, and more distinct body panels.[51]

The styling has been altered for both aesthetic and practical purposes: AMG side skirts and rear apron give the E 63 more aggressive styling, and the larger air apertures on the front of the car allow for more air intake to the naturally aspirated 6.2 litre V8. Another styling change on the E 63 is the wider, flared front wheel arches which accommodate the AMG front axle with a 2.2-inch-wider (56 mm) track.[54]

The E-Guard armoured version, which features VR4 (formerly B4) level protection, went on sale in April 2009.[58] The vehicles are equipped with steel and aramid fiber (Kevlar) armour and bullet-resistant windows, as well as run-flat tyres rated for a top speed of 240 km/h (149 mph) (50 kilometres (31 mi) at 80 km/h (50 mph) when deflated), a special Level II version of the Airmatic air suspension system, emergency alarm system, intercom system, and underbody armour.[59] As of 2011 it has an MSRP (in the Mexican market) of $1,954,900MXN Mexican Pesos, or approximately US$143,000 US Dollars.[60]

The E 250 BlueTEC is a concept vehicle based on the E 250 CDI BlueEFFICIENCY saloon, but with BlueTEC selective catalytic reduction and the 7G-Tronic Plus transmission. The vehicle was unveiled at the 2009 New York Auto Show.[61] The E 250 BlueTEC is capable of 28 MPG city/39 MPG highway.

A version commemorating Karl Benz inventing the first automobile powered by an internal combustion engine 125 years prior, for Hong Kong and Mexican markets. It is available for E 250, E 300 and E 350 models.[62]

Erebus Motorsport competed in the Australian V8 Supercars Championship with E 63 AMGs between 2013 and 2015. These race cars had very little in common with the road going versions with only the exterior being shared with the race cars.