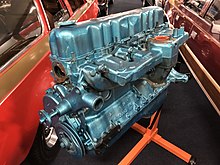 A petrol engine (gasoline engine in American English) is an internal combustion engine designed to run on petrol (gasoline). Petrol engines can often be adapted to also run on fuels such as liquefied petroleum gas and ethanol blends (such as E10 and E85).

Animation of an Otto cycle engine

Most petrol engines use either the four-stroke Otto cycle or the two-stroke cycle.[1][2][3] Petrol engines have also been produced using the Miller cycle and Atkinson cycle.[4][5][6][7]

Most petrol-powered piston engines are straight engines or V engines. However, flat engines, W engines and other layouts are sometimes used.

Wankel engines are classified by the number of rotors used.

Petrol engines are either air-cooled or water-cooled.

Petrol engines use spark ignition and high voltage current for the spark may be provided by a magneto or an ignition coil. In modern car engines the ignition timing is managed by an electronic Engine Control Unit.

The power output of small- and medium-sized petrol engines (along with equivalent engines using other fuels) is usually measured in kilowatts or horsepower.

Typically, petrol engines have a thermodynamic efficiency of about 20% (approximately half that of some diesel engines).[8]

Applications of petrol engines include automobiles, motorcycles, aircraft, motorboats and small engines (such as lawn mowers, chainsaws and portable generators).