The stadium has hosted the Fiesta Bowl, 2007 and 2011 BCS National Championship Games, 2016 College Football Playoff National Championship, Super Bowl XLII in 2008, the Pro Bowl and Super Bowl XLIX in 2015, and will host Super Bowl LVII in 2023. For soccer, it was one of the stadiums for the 2015 CONCACAF Gold Cup also the first semi-final of the 2019 CONCACAF Gold Cup and the Copa América Centenario in 2016. For basketball, it hosted the NCAA Final Four in 2017, which is scheduled to return in 2024.

The stadium opened in 2006 as Cardinals Stadium. Later that year in September, the University of Phoenix acquired naming rights, renaming it University of Phoenix Stadium, in what was initially a 20-year agreement. The current name was announced in September 2018 and comes from insurance company State Farm, which has an 18-year commitment on their naming rights deal.[11][12]

Since moving to Arizona from St. Louis in 1988, the Cardinals had played at Sun Devil Stadium on the campus of Arizona State University in Tempe. The Cardinals planned to play there for only a few years, until a new stadium could be built in Phoenix. However, the savings and loan crisis derailed funding for a new stadium during the 1990s. Over time, the Cardinals expressed frustration at being merely tenants in a college football stadium. The lack of having their own stadium denied them additional revenue streams available to other NFL teams. The Cardinals campaigned several times in the years prior to its construction for a new and more modern facility.

The ceremonial groundbreaking for the new stadium in 2003 was held on April 12, and after three years of construction, the 63,400-seat venue opened on August 1, 2006. It was designed by Eisenman Architects and HOK Sport (now Populous).[13] The stadium is considered an architectural icon for the region and was named by Business Week as one of the ten “most impressive” sports facilities on the globe due to the combination of its retractable roof (engineering design by Walter P Moore) and roll-in natural grass field,[14] similar to the GelreDome and the Veltins-Arena.[15]

LED video and ribbon displays from Daktronics in Brookings, South Dakota were installed in 2006 prior to Arizona's first game of the season at the new stadium.[16]

The playing field outside and lined for the Arizona Cardinals.

The interior with field removed. To protect the stadium's grass playing surface, non-football events are always held with the facility in this configuration.

The stadium has 88 luxury suites – called luxury lofts – with space for 16 future suites as the stadium matures.

The 25 acres (10 ha) surrounding the stadium is called Sportsman's Park (the team had previously played in a venue of the same name in St. Louis from 1960 to 1965). Included within the Park is an 8-acre (3.2 ha) landscaped tailgating area called the Great Lawn. The approximate elevation at field level is 1,070 feet (330 m) above sea level.

The stadium seating capacity can be expanded by 8,800 for "mega-events" such as college bowls, NFL Super Bowls, the NFC Championship Game, and the Final Four[17] by adding risers and ganged, portable "X-frame" folding seats. The end zone area on the side of the facility where the field tray rolls in and out of the facility can be expanded to accommodate an additional tier of seating which slopes down from the scoreboard level.

The roof is made out of translucent Birdair fabric and opens in 12 minutes. It is the first retractable roof ever built on an incline.

The multipurpose nature of the facility has allowed it to host 91 events representing 110 event days between the dates of August 4, 2006 through the BCS National Championship January 8, 2007.

The first preseason football game was played August 12, 2006 when the Cardinals defeated the Pittsburgh Steelers, 21–13. The first regular season game was played September 10 against the San Francisco 49ers (the Cardinals won 34–27). The stadium's air-conditioning system made it possible for the Cardinals to play at home on the opening weekend of the NFL season for the first time since moving to Arizona in 1988.

On October 16, 2006, the stadium hosted a notable game between the Cardinals and the undefeated Chicago Bears where the Bears came back from a 20-point deficit to defeat the Cardinals. The Bears would later go on to play in Super Bowl XLI.

The Cardinals' first home playoff game since 1947 took place at the stadium on January 3, 2009, with Arizona beating the Atlanta Falcons, 30–24. The stadium also hosted the 2008 NFC Championship Game between the Cardinals and Philadelphia Eagles on January 18, 2009, which the Cardinals won 32–25 in front of over 70,000 fans in attendance and advanced to Super Bowl XLIII.

The 2015 Pro Bowl was the first Pro Bowl to be held at the same location as the same year's Super Bowl since 2010. The Pro Bowl returned to Hawaii in 2016.[18] On February 1, 2015, the New England Patriots defeated the Seattle Seahawks 28–24 in Super Bowl XLIX held at the stadium.

On November 30, 2020, it was announced that because of Santa Clara County's new COVID-19 rules barring contact sports, the 49ers could not play at their home Levi's Stadium; the 49ers were subsequently forced to play their final three home games against the Buffalo Bills, the Washington Football Team, and the Seattle Seahawks at State Farm Stadium. Including the road game against the Cardinals, the 49ers played four straight games at State Farm Stadium to end the season.

Aerial view of the stadium in 2007

The stadium was the venue for the Fiesta Bowl on January 1, 2007 featuring the Boise State Broncos vs. the University of Oklahoma Sooners (Boise State won 43–42 in overtime); and the BCS National Championship on January 8, 2007 between the (1) Ohio State Buckeyes and the (2) University of Florida Gators, which the Gators won 41–14.

On January 10, 2011, the 2011 BCS National Championship Game between the Auburn Tigers and the Oregon Ducks had an attendance record setting 78,603 on hand for the game. 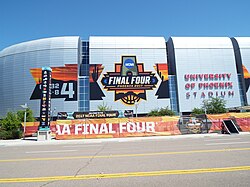 Before 2018, the venue was known as University of Phoenix Stadium. It hosted the Final Four, the semifinals and championship game of the NCAA Division I men's basketball tournament, in 2017, and will do so again in 2024.

On January 30, 2013, Mexico played against Denmark,[19] a game that was broadcast on Televisa Deportes, UniMás, and TV Azteca.[citation needed] The match ended in a 1–1 draw.[19]

On November 19, 2015, the stadium was one of the sites selected for the 2016 Copa América Centenario.[20][21][22] The stadium hosted three matches, including Mexico vs. Uruguay on June 5, and the third-place match (United States vs. Colombia) on June 25.

In club soccer, Real Madrid battled MLS side LA Galaxy in August 2013. The Spanish side defeated the Galaxy 3–1.

The stadium has hosted the CONCACAF Gold Cup and the first semi-final of the 2019 Gold Cup.

An attendance record setting 72,219 fans at the State Farm Stadium for WrestleMania XXVI

On January 30, 2016, Monster Jam returned to the stadium for the first time since 2009, with 16 of the best trucks. On February 6, the AMA Supercross Championship raced for the first time, after visiting Chase Field from 1999 to 2015.

A panoramic view of the interior of the stadium before a Cardinals football game, September 27, 2009
Video of US President Joe Biden and Vice President Kamala Harris virtually touring the vaccination center at the stadium on February 8[32]

On February 10, 2019 Russell M. Nelson, President of The Church of Jesus Christ of Latter-day Saints, spoke to an audience of 68,000, a capacity larger than many events due to the majority of the field space being filled with seats.[citation needed] 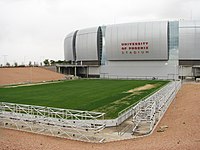 The movable field outside of the stadium.

The stadium has approximately 14,000 on-site parking spaces (plus 12,000 adjacent spaces),[36] located in numerous lots that surround the stadium's 2,000 disabled parking spaces. The design improvement, featured for example in a Discovery program about this stadium, is zoning. Parking spaces for guests are zoned with preferred leaving directions, to achieve the fastest possible movement of traffic.[37]