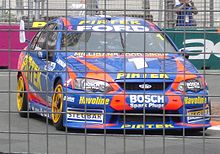 The team was based in Yatala on the Gold Coast.[1] Their nominated test track was initially Lakeside Raceway and later Queensland Raceway.

The team was originally formed as Alan Jones Racing in 1996, with Ross and Jim each holding a one-third ownership stake along with the team's lead driver, 1980 Formula One World Champion, Alan Jones. Racing initially under the Pack Leader Racing identity with Paul Romano as No. 2 driver, the team had several title sponsors in 1997 before the Stone brothers bought out Jones' stake at the end of the year.[4][5]

Now a single car team under the name Stone Brothers Racing, the team signed 1997 Bathurst 1000 co-driver Jason Bright to drive a Pirtek sponsored Ford EL Falcon for the 1998 season. The team also ran a customer car for Larkham Motor Sport with Mark Larkham, essentially a full team-mate to Bright. Bright and Larkham had a mixed year, with the highlight being a win in the Bathurst 1000 with co-driver Steven Richards, which was almost a team 1–2 result as the team displayed excellent strategy and teamwork during the day, only a battery problem slowing the car of Larkham and Brad Jones who still managed to finish fourth.[6] The team continued to show promise in 1999, with Bright scoring three poles, and three podiums including a win at the Hidden Valley Raceway round.[7]

Bright left the team to pursue opportunities in the United States and Larkham Motor Sport went out on its own. The team expanded to a two-car operation for 2000, with Craig Baird taking over the Pirtek car, and Tony Longhurst the new Caltex sponsored entry. In a lean year, the team's best finish was a third for Baird at the opening Phillip Island round, although Longhurst and co-driver David Besnard lead the Queensland 500 for a period and late in the Bathurst 1000 until tangling with another car.[8]

SBR then opted for some young talent for 2001, with Marcos Ambrose and David Besnard taking over the driving duties in the Pirtek and Caltex Falcons respectively. Ambrose won a round, took two podiums, and impressed with his qualifying speed. Besnard had a mixed year, taking one podium. Both drivers remained with the team for the 2002 season, and took two round wins between them; a Queensland 500 victory for Besnard and Simon Wills, and a dominant win at the final round at Sandown for Ambrose.

In 2003, Ambrose continued to drive the Pirtek sponsored Falcon, with Russell Ingall recruited to drive the Caltex car. SBR was the dominant force, with Ambrose winning the championship and Ingall finishing seventh. Between them they won eight of thirteen rounds (6 to Ambrose, 2 for Ingall). Ambrose took 5 pole positions. Meanwhile, Mark Winterbottom won the Development Series in a SBR Ford AU Falcon.

This dominance continued in 2004, with Ambrose winning a second championship and Ingall finishing 2nd overall. The team recorded 6 round wins – 5 to Ambrose and 1 to Ingall. Among these round victories was a Sandown 500 victory for Ambrose and Greg Ritter, with Ingall and Cameron McLean finishing second.

In 2005, Ingall won the championship through consistency and strategy, rather than outright speed and wins were crucial with Ingall only recording one round win. Ambrose had led the championship until he was involved in an incident in the Bathurst 1000 with Greg Murphy. He went on to finish third behind Ingall and Craig Lowndes. Ambrose took victories in the first and last rounds of the year.

In 2006, Ambrose left V8 Supercars to pursue a career in NASCAR, and Pirtek withdrew its sponsorship. Former F1 Test Driver James Courtney was signed to drive the No. 4 car, now sponsored by Jeld-Wen. Ingall continued in the Caltex entry, but couldn't defend his title – eventually finishing a disappointing eighth. Courtney improved throughout the season to finish 11th, and won Rookie of the Year. The highlight of the year was the team's performance at the Bathurst 1000, with Courtney and Glenn Seton third, and Ingall and Luke Youlden coming in fourth.

Ingall and Courtney continued driving for SBR in 2007, which proved to be an inconsistent season. Courtney scored round podiums in Adelaide, Bathurst and Bahrain, and a pole position in Adelaide; while Ingall managed a podium on the Gold Coast. From the Oran Park round, SBR also entered a customer car for Team Kiwi Racing with Shane van Gisbergen driving.

In 2008, Russell Ingall and Caltex both left the team, being replaced by Shane van Gisbergen and SP Tools. Courtney broke through for his first race win in the series at the team's test track, Queensland Raceway and with David Besnard finished third at the Bathurst 1000.

Ross and Jim Stone, two New Zealand-born brothers, were the team manager and chief engineer of SBR respectively. Ross won the New Zealand Formula Ford Championship twice in the 1970s. In 1986 the Stones engineered a Holden VK Commodore for Graeme Crosby[12] and in 1987 they engineered the Nissan Skyline DR30s of Team Nissan New Zealand for Kent Baigent and Graham Bowkett.[13]

Both were reunited at Dick Johnson Racing in 1992 running Sierras and later Falcons overseeing victory in 1994 at the Sandown 500 and Bathurst 1000 endurance races. They also masterminded John Bowe's 1995 series and Sandown 500 wins.[18][19]

In 1996 they formed Alan Jones Racing with former world champion, Alan Jones. The brothers bought out Jones' share in the team after two seasons and the team was renamed Stone Brothers Racing in 1998. After selling the team to Erebus Motorsport at the end of 2012, Ross stayed on as team manager until the end of 2014,[20] while Jim is running Matt Stone Racing in the Development Series with his son.[21] Ross has since begun his own team, Ross Stone Racing running an Aston Martin in GT racing for Andrew Miedecke.