A T-bucket (or Bucket T) is a hot rod, based on a Ford Model T[1] built from 1915 to 1927, but extensively modified. T-buckets were favorites for greasers.[citation needed]

Model Ts were hot-rodded and customized from the 1920s on, but the T-bucket was specifically created and named by Norm Grabowski in the 1950s.[citation needed] This car was named Lightning Bug,[citation needed] better known as the Kookie Kar, after being redesigned by Grabowski and appearing in the TV show 77 Sunset Strip, driven by character Gerald "Kookie" Kookson. The exposure it gained led to numerous copies being built. 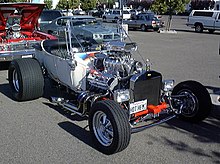