The company initially handled privateer work before entering works touring car racers for manufacturers such as Mazda and Rover. However, TWR became most closely associated with Jaguar, a relationship which started in 1982 with the successful entry of the Jaguar XJS into the European Touring Car Championship, chalking up a number of wins that year. The relationship continued and by 1988, TWR-Jaguar had taken its first Le Mans victory in a V12-powered XJR-9. Further success followed with a Le Mans win in 1990.

TWR and Jaguar formed JaguarSport initially to build tuned versions of Jaguar road-cars, culminating in the production of the XJ220 and XJR-15 sports cars at a new facility at Bloxham. With Jaguar bought by Ford in 1989, its relationship with TWR faded and by 1994, JaguarSport had been liquidated, with the Bloxham factory being overhauled for production of Aston Martin automobiles which was also at the time under Ford's ownership.

TWR had continued to achieve racing success with other manufacturers, notably winning Le Mans again in 1996 and 1997 in a Porsche-powered WSC-95. However, it was the costs resulting from the purchase of the Formula 1 team Arrows in 1996 that led to the demise of TWR in 2002.

The UK assets and facility were bought by Menard Competition Technologies. The facilities were used as Arrows Grand Prix International, Super Aguri and Caterham F1 teams headquarters.[1] The Australian part of the business was sold to Holden.

TWR started by modifying BMW 3.0 CSLs, but soon was contracted to head Mazda's works program in the British Touring Car Championship. The TWR developed RX-7, with Win Percy in the driving seat, won the title in both 1980 and 1981. Walkinshaw himself also took a win in the Spa 24 Hours.

After preparing the Dakar-winning Range Rover for René Metge in 1982, TWR began an association with British Leyland, preparing the Jaguar XJS and Rover 3500 Vitesse for both the BTCC and European Touring Car Championship.

Success in the latter series (as well as the French championship) with both cars led to a partnership to develop a Jaguar prototype for Group C racing, for use in both the World Sportscar Championship (WSCC) and the IMSA GT Championship (IMSA). John Egan, Jaguar chairman, was keen to put Jaguar back on the map after Jaguar was privatised in 1984 and felt that a return to sports-car racing would give Jaguar a much needed boost in international markets. As Bob Tullius' Group 44 initially ran Jaguar powered cars in IMSA, Jaguar partnered with both Group 44 (for IMSA) and TWR (for WSCC). However, it soon became clear that a single partner could successfully run in both WSCC and IMSA and so by 1988 TWR had secured the contract to run in both series.

However, rule changes made the 3.5-litre turbocharged cars defunct within just one season of the WSCC and so TWR developed the all-new XJR-14 for 1991 – the first full car designed by Ross Brawn – for the final year of Jaguar racing in WSCC. Although this car won both the WSCC Drivers' and Teams' championship, Jaguar (along with almost all other manufacturers) decided that it no longer had any interest in WSCC due to unfair rule changes. For IMSA in 1991, TWR ran the XJR-16, a development of the XJR-10. In spite of six wins in fourteen races, TWR-Jaguar was placed second overall to the more consistent Nissan team. For IMSA in 1992, Jaguar's last season in sportscar racing, XJR-14 was brought to America, but lack of development to deal with tighter, bumpier US circuits meant that it could not repeat the result of the previous year in WSCC, taking second in the Driver's championship (Davy Jones) and third in the Manufacturer's Championship.

In 1991, in parallel with production of the XJR-14, TWR also developed the £500,000 XJR-15 for a select group of customers, based on the Le Mans winning XJR-9. This was raced in its own series, the Jaguar Intercontinental Challenge, supporting F1 races at Monaco, Silverstone and Spa. The winning driver, Armin Hahne, took a US$1m prize. The car was also road-legal, the only road-car to be fully designed and built by TWR.

In Australia, Walkinshaw Racing competed in the Australian Touring Car Championship, including spells as factory-back teams under the names Holden Racing Team and HSV Dealer Team.

TWR modified its XJR-14 design (which had also been used by Mazda in the final years of the World Sportscar Championship as the rebadged Mazda MXR-01) into the TWR WSC-95 for Porsche. Porsche decided against using it in 1995 due to a sudden rule change, but in 1996 it was entered at Le Mans by Joest Racing and won the race, a feat it repeated the following year at the 1997 24 Hours of Le Mans.

In 1997, Nissan Motorsports turned to Tom Walkinshaw Racing to help them develop the Nissan R390 GT1 race car (a re-bodied XJR-15) to compete in sports car racing.[2] In the 1998 24 Hours of Le Mans, Nissan was able to achieve considerable success with all four of their cars finishing the race, placing 3rd, 5th, 6th, and 10th overall.[3]

Raul Boesel (1987), Martin Brundle (1988) and Teo Fabi (1991) each won the WSCC Driver's Championship, driving for TWR-Jaguar. TWR secured victory at Le Mans in 1988 for Andy Wallace, Johnny Dumfries and Jan Lammers; in 1990 for Brundle, Nielsen and Cobb; in 1996 for Davy Jones, Alexander Wurz and Manuel Reuter and in 1997 for Michele Alboreto, Stefan Johansson and Tom Kristensen.

A number of prominent motor-racing engineers made careers at TWR, including Roger Silman (Operations Director); Tony Southgate (engineering director) and Ross Brawn (engineering director). Ian Callum was design director from 1991 to 1999. TWR was also associated with Peter Stevens, who was a director of TWR Design and designer of the Jaguar XJR-15.

TWR in Formula One

Tom Walkinshaw Racing was involved in Formula One from 1992 to 2002. At first, Walkinshaw became Benetton's engineering director, and was instrumental in developing the car that took Michael Schumacher to his first World Championship title in 1994. A falling out with Benetton boss Flavio Briatore saw Walkinshaw move to a position as team manager at Ligier, which had been acquired by Briatore.

After a failed attempt at purchasing Ligier, Walkinshaw instead bought a majority stake in the Arrows in 1996. The following year, Arrows surprised the world by signing World Champion Damon Hill and introducing Bridgestone tyres to Formula One. Although the team nearly won the 1997 Hungarian Grand Prix, Arrows continued to have trouble attracting sponsorship, and following the liquidation of Arrows, TWR being the major shareholder of the outfit, soon followed suit, closing its doors in 2002 with no major success with the team. TWR Australia was quickly acquired by Holden. The TWR technical centre at Leafield was sold and would later become the headquarters of the now defunct Super Aguri F1 and later Caterham F1 teams.

TWR created 'TWR Sport' in 1984 to develop heavily modified versions of the Jaguar XJ-S. Designated XJR-S, the cars benefited from the racing experience in European Touring Cars, featuring improved aerodynamics; uprated suspension and brakes; tuned engine and detail changes. The success of TWR Sport led to the formalising of a joint venture (50/50) in 1988 called 'Jaguar Sport'. Jaguar Sport would initially focus on building tuned versions of Jaguar road cars (the XJR-S coupe and XJR saloon). However, with overwhelming demand to put the concept Jaguar XJ220 into production, it was decided that Jaguar Sport would design and develop the new sports car, for which a new facility was secured at Bloxham, Oxfordshire. Production commenced in 1990 and continued til 1993.

Following TWR's success with Jaguar at Le Mans in 1988, Tom Walkinshaw had been pressed by a number of wealthy enthusiasts to build them a road legal version of the XJR-9. He decided (initially outside of Jaguar's knowledge) to put a modified version of the XJR-9 into production, initially designated R-9R but ultimately designated Jaguar XJR-15, a limited-edition road-going racing car. The XJR-15 was produced in 1991 at Bloxham, alongside the XJ220.

TWR then took on the design and development role for the new Aston Martin DB7. This car was designed by Ian Callum and built at the former Jaguar Sport facility at Bloxham.

TWR's final fully developed road car was the XJ220S, limited edition racing version of the XJ220, built between 1996 and 1997. TWR took the standard XJ220, lightened it considerably by fitting carbon-fibre bodywork, an aerodynamic body kit, (derived from the XJ220C racing car) and stripping out the interior. A tuned J-V6 engine was fitted, rated at 680 PS (500 kW; 671 hp) completing the package.

TWR undertook work for other manufacturers including development of the Renault Clio V6, and the Saab 9-3 Viggen. TWR were also involved in MG Rover's attempt to develop a replacement for the elderly Rover 45/MG ZS; they were contracted to re-engineer the Rover 75/MG ZT into a smaller car. However, the demise of Arrows and TWR meant that RD/X60, as this project was known, never reached production.

In 1997, former motorcycle world champion Kenny Roberts formed his own racing team and manufactured a motorcycle. Basing his company in England to take advantage of the Formula 1 industry, Roberts enlisted Tom Walkinshaw Racing to help develop a three-cylinder two-stroke engine.[4] While the motorcycle was never able to win a Grand Prix race, it did manage to win a pole position with rider Jeremy McWilliams taking the top qualifying position at the 2002 Australian Grand Prix.[5]

In 1994, TWR returned to the BTCC, allied with Volvo. This partnership was responsible for the controversial 850 Estate racing car, which was only rendered uncompetitive when the FIA allowed the use of aerodynamic aids in 1995. TWR then built and ran the works 850 Saloon with six wins in 1995 and five wins in 1996, and S40 securing one win in 1997 in the BTCC. 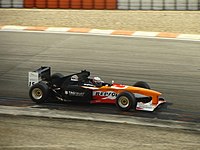 Arrows A20 Formula One car 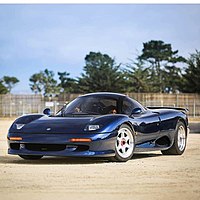 The Jaguar XJR-12, the last V12 powered sports prototype to win the 24 hours of LeMans 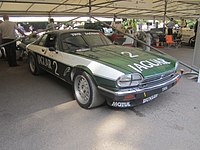