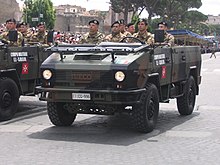 The torpedo body style was a type of automobile body used from 1908 until the mid-1930s, which had a streamlined profile and a folding or detachable soft top. The design consists of a hood or bonnet line raised to be level with the car's waistline, resulting in a straight beltline from front to back.[1]

The name was introduced in 1908 when Captain Theo Masui, the London-based importer of French Gregoire cars, designed a streamlined body and called it "The Torpedo".[2]

The Torpedo body style was usually fitted to four- or five-seat touring cars (cars without a fixed roof) with detachable or folding roof, and low side panels and doors. Torpedo cars did not have B pillars, so the only uprights present were those supporting the windshield.

Similar styles are phaeton and baquet.[3]

The name is also used for trucks with a hood or bonnet.[4][5]