Skip to content
Type of car body
For the use of the term in motor racing, see Touring car racing.
For modern sports cars designed for long-distance cruising, see grand tourer. 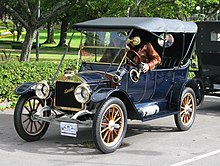 "Touring car" is a style of open car built in the United States which seats four or more people. The style was popular from the early 1900s to the 1930s.

The cars used for touring car racing in various series since the 1960s, are unrelated to these early touring cars, despite sharing the same name.

For a brief time, touring sedans were offered with a solid back and permanent roof, unlike the roof on a touring sedan which could be folded back and stowed. Neither version offered permanent protection from the elements.[6]