Skip to content
Short for “utility” referring to a vehicle with an open rear trunk
This article is about usage of the term "ute" and coupé utility models produced in Australia. For the coupé utility body style in general, see coupé utility. For the Native American tribe, see Ute people.

Traditionally, the term referred to vehicles built on passenger car chassis and with the cargo tray integrated with the passenger body (coupé utility vehicles). However, present-day usage of the term "ute" in Australia and New Zealand has expanded to include any vehicle with an open cargo area at the rear,[1][2][3][4][5] which would be called a pickup truck in other countries. 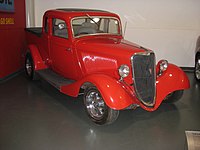 Ford Australia was the first company to produce an Australian Coupe ute, which was released in 1934.[13] This was the result of a 1932 letter from the unnamed wife of a farmer in Australia asking for "a vehicle to go to church in on a Sunday and which can carry our pigs to market on Mondays".[13] In response, Ford designer Lew Bandt designed a two-door body with a tray at the rear for the American Ford Model A chassis, and the model was named "coupe utility".[13] When the Australian version was displayed in the US, Henry Ford nicknamed it the "Kangaroo Chaser". A convertible version, known as the roadster utility was produced in limited numbers by Ford in the 1930s.[14][15] 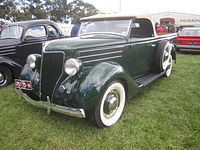 The ute variant of the Ford Falcon was produced from 1961-2016.[12] For the first 38 years of production, the design used a coupe ute style, but with the introduction of the 1999 AU Falcon, the Falcon ute switched to a cargo bed that is separate from the cabin, while still retaining the Falcon sedan front-end and cabin.[23] The cargo bed was separated so that both "utility" and "cab chassis" body styles could be produced together.

From 1951–1968, the "utility" was sold as part of the 48–215 to HR model ranges.[27] From 1968–1984 the "utility" was included in the Holden Belmont/Kingswood range. In 1984, Holden discontinued the ute variant and it was not part of the VB to VL Commodore ranges. The model returned in 1990 based on the VN Commodore chassis and remained part of the model range until Australian production ended in 2017. In 2000, the Holden Commodore was the first Australian ute to feature independent rear suspension,[28] the Ford Falcon ute retained a live axle rear suspension design until production ended in 2016.[29]

In 2008, the VE Commodore Ute was proposed to be exported to North America as the Pontiac G8 ST. At least one prototype was built, but GM decided not to proceed with production due to the Global Financial Crisis.[30][31] 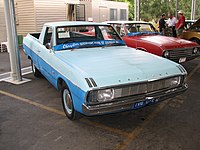