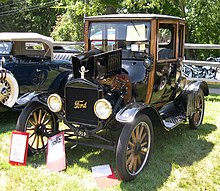 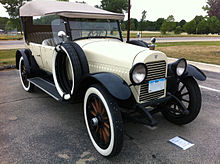 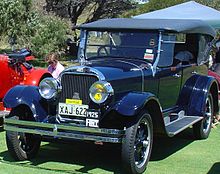 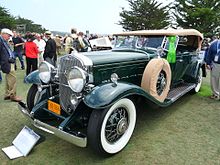 A vintage car is, in the most general sense, an old automobile, and in the narrower senses of car enthusiasts and collectors, it is a car from the period of 1919 to 1930. Such enthusiasts have categorization schemes for ages of cars that enforce distinctions between antique cars, vintage cars, classic cars, and so on. The classification criteria vary, but consensus within any country is often maintained by major car clubs, for example the Vintage Sports-Car Club (VSCC) in the UK.[1]

Further information: History of the automobile

The 1951 Cadillac Classic used by the then Saudi King

The vintage era in the automotive world was a time of transition. The car started off in 1919 as still something of a rarity, and ended up, in 1930, well on the way towards ubiquity. In fact, automobile production at the end of this period was not matched again until the 1950s. In the intervening years, most industrialized countries built nationwide road systems with the result that, towards the end of the period, the ability to negotiate unpaved roads was no longer a prime consideration of automotive design.

Cars became much more practical, convenient and comfortable during this period. Car heating was introduced (progressing from hot bricks via double-skinned exhaust manifolds to the heater radiator matrix),[2] as was the in-car radio.[3] Four-wheel braking from a common foot pedal was introduced, as was the use of hydraulically actuated brakes.[4]

Towards the end of the vintage era, the system of octane rating of fuel was introduced, allowing comparison between fuels.[citation needed] In 1923 the gasoline additive tetraethyl lead made its debut at the Indy 500 that resulted in a boost in octane from the 1950s to the 1980s[5] In the United States drive-in restaurants were introduced as well as suburban shopping centers and motels.

Alfred P. Sloan and Harley Earl of General Motors, and Walter P. Chrysler capitalized on advertising the automobile's role in the life of the consumer for more than just the utilitarian value compared with the horse. The stock market crash of 1929 started the layoff of automotive workers and many new companies went bankrupt but over two million cars were still produced in 1929 and 1930.[6]

The Federal Aid Road Act of 1916 was the first federal highway act. War and lack of funding hampered any positive results of this act. The Federal Aid Highway Act of 1921 (Phipps Act) started a 50/50 matching fund to states for road building and resulted in the creation of new and improved roads. During this period as well as the car adapting to society, there were better roads, and society began to adapt to the car. Dwight D. Eisenhower participated in the highly publicized Transcontinental Motor Convoy in 1919 and after becoming President the experience influenced the Federal Aid Highway Act of 1956 that included 41,000 miles of highways.

The end of World War I brought about the "Depression of 1920-21" with an inflation rate of over 20 percent, a 7 percent Federal Bank discount loan rate, and an 11.7 percent unemployment rate, that resulted in many companies going bankrupt and the automotive industry was decimated.[7]

From 1919 to 1929, many dramatic changes took place. General Motors went into a financial crisis that lasted until after Alfred Sloan became president in 1923. Hudson produced the Essex in 1919 that, by 1925, had propelled the company to third in total sales behind Ford and Chevrolet.[8] Ford was in the process of building a new plant, buying back stock, and began an 18-month process of tooling-up to replace the Model T with the Model A in 1927. In 1921 Maxwell failed and Walter P. Chrysler, formerly of General Motors, was brought in to reorganize it and, in 1925, the Chrysler Corporation was formed. With Ford out for a period, Chrysler was able to produce and market the low-priced Plymouth in 1928, and bought out the Dodge Brothers, also in 1928, resulting in "The Big Three" in the United States.

There were other automakers that made it past the 1920-1921 depression only to fail during the Great Depression.

Antique automobiles and early to middle era[when defined as?] classic cars do not have the safety features that are standard on modern cars. The most rudimentary of safety features, front wheel brakes and hydraulic brakes, began appearing on cars in the 1920s and 1930s respectively.[citation needed]

For the average person car collecting is a hobby. A person can have a fascination with a certain vehicle, make or a history with one so seeks a particular make or model. Finding such a car at an affordable price is not always hard but the price will depend on the condition or the desired end result. Usually the less work required on a vehicle equates to a higher price, the more work required means a cheaper initial cost, but often more in the long run, and a person's level of restoration experience plays an important part.[9]

Comedian and avid car collector Jay Leno stated, "Any car can be a collector car, if you collect it."[10] Car collecting as an investment can be rewarding but most serious investment collectors seek rare or exotic cars and original unmodified cars hold a more stable price. Collecting as an investment requires expertise beyond enthusiast collecting and the standard of quality is far higher as well as a need for investment protection such as storage and maintenance. A short-term investment collector must be able to find a vehicle that has market value that is expected to rise in the foreseeable near future. A long-term investment collector would be less interested in any short-term value seeking to capitalize on an expected value rise over a period of years and a vehicle must have certain intrinsic values that are common to other investors or collectors of both short and long term.

Cars that were made in small numbers or often have a higher value but can be more difficult to maintain. Certain year and model cars became popular to turn into hot rods thus destroying their original condition. Other models were produced in such quantities that the price is still not inflated. Market trend is an important part in the price of a vintage car. An "almost" original and in perfect shape model A that was abundantly produced can be purchased for $20,000.00.[11] A collector as an investor would have to know the potential market and have a belief that the future market will bring a return on an investment.

Determining the value of a vintage car can be difficult, as there are many different factors that can potentially influence the price. The age, condition, rarity, modifications, vehicle history and mileage can all drastically change a car's value, among other observable factors such as body type, drivetrain and engine capacity.[12] In recent years, services have begun providing classic and vintage car valuation data to the public, by establishing baseline prices for vehicles in various conditions and publishing marketing trends and forecasts collectors can use to monitor the state of the market.[13] As a result of the variability in car values, most insurers offer Agreed Value insurance coverage for classic cars. Agreed Value coverage involves both the owner and insurance company agreeing on the car's value and insuring it for the agreed amount. This differs from the Actual Cash Value claim settlement method used in traditional auto insurance policies, which determines the claim value of the vehicle after a "total loss" or vehicle theft occurs.[14][15]

To collectors and investors, a vehicle's condition rating[16] is important, and in the United States there are two systems, the category and the points system. The category system has six categories used to rate the condition of a vehicle. The points system assigns points from 40 to 100 that correspond with the category system and below 40 there are three for other conditions. Both systems are listed together for ease of comparison: