The Volvo S40 is a series of compact and subcompact executive automobiles marketed and produced by the Swedish manufacturer Volvo Cars from 1995 to 2012.

The range was replaced by the Volvo V40 five door hatchback in 2012. 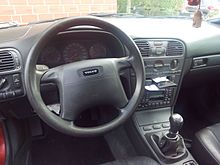 During August 1995, Volvo released its new series, with the intention of calling the cars S4[6][7] and F4.[8] However, as Audi had already reserved the "S4" name, Volvo opted to name the range S40 (saloon), and V40 (estate).[9] These cars were manufactured at the Nedcar factory at Born in the Netherlands (a pre Ford joint venture between Volvo and Mitsubishi Motors) and based on a common platform with the Mitsubishi Carisma, later used by the Proton Waja. They were also the last Volvos to be produced at the Born plant; a lineage that had begun in the early 1970s with Volvo's collaboration with DAF that had led to the Volvo 66 and the Volvo 300 series.

In the United Kingdom, it cost approximately 50% more than the related Mitsubishi Carisma. The car helped change perceptions of Volvo: "The S40/V40 range was the car that finally persuaded buyers that Volvo really could build a credible compact executive car",[10] reported the RAC. For the 2000 model year, Volvo expanded the S40/V40's market to North America, where went on sale exclusively with the 1.9 liter turbo.[11]

The V40, with a drag coefficient of 0.32,[12] was the first whole model to be introduced under the direction of the British designer Peter Horbury, Volvo’s design director,[12] and was marketed in Australia, South America and the Far East.[12] The V40 was named the ‘Most Beautiful Estate Car in the World’ at an Italian award ceremony.[12] The official premiere was at the Frankfurt Motor Show, in September 1995, with the V40 premièring in December 1995, at the Bologna Motor Show.[13]

There was also a 1.8 L (1834 cc) petrol direct injection engine provided by Mitsubishi as part of the platform sharing between the 40 series and the Carisma. The Volvo S40/V40 series was a completely new car from the ground up, only one engine – the 1.9 turbo diesel – carried over from the old 400 Series.

The low (2.0T) and high (1.9 T4) pressure turbo variants were positioned at the top of the motor range. The 2.0T was rounded down and badged as 1.9T and was the only engine available in North America. The five speed manual transmission, widely available in Europe, was not certified in North American S40s, with the five speed automatic as the only option. No electric CVT was planned, unlike the 440 HTA / High Tech Auto CVT that had been released before the 400 series was completely phased out.

The Volvo S40 was the first car to earn a four star Euro-NCAP safety rating. 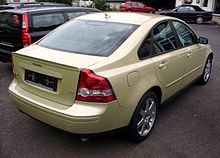 Volvo C70, hardtop convertible based on the same platform

Introduced in the beginning of 2004, the second generation S40 (known as the 2004.5 Volvo S40) introduced a new design based on the Volvo P1 platform built at the Volvo Cars factory in Ghent, Belgium. At the same time, the V40 was replaced by the estate V50, also based on the P1 platform and built in Ghent.

The chassis for this car and the majority of its components were developed by Volvo, however similar mechanical components can be found in the Mazda3 and the European Ford Focus.[28] It had the latest generation of Volvo's modular five cylinder engines.

The inline fives were frequently improved upon by Volvo since the engine's debut in 1991 for the 1992 model year Volvo 850. The top-of-the-line S40/V50 T5 AWD, as well as the 2.4 and 2.4i, powertrain is still made by Volvo. The transmission is developed with Getrag at Volvo's Koping Transmission Center in Sweden, and the AWD system bought from Haldex Traction of Sweden.

The S40/V50 T5 (one of the several variants) features the 2.5 L B5254T3 (later B5254T7) (2521 cc) five-cylinder fuel-injected engine with a light pressure turbocharger. The valvetrain has four valves per cylinder and is a DOHC design.

The engine is transversely mounted at the front of the vehicle and was available with the M66W (front wheel drive) or M66C (all wheel drive) drivetrains. In the United States, the manual (six speed) transmission was only available on the V50 in 2006, 2007 and 2010 and only with AWD and R-line trim.

The initial 2.0 diesel engine was the DW10, produced by PSA. A new range of engines and transmissions were introduced at the end of May 2010 (see "engine specifications" below).

Volvo launched an advertising campaign for the S40 titled The Mystery of Dalarö, using a documentary style video approach. The eight minute film was credited to fictitious Venezuelan film maker Carlos Soto. In fact, as was disclosed later, it was directed by Spike Jonze.

The film is set on 25 October 2003, where 32 people supposedly purchased a Volvo S40, at the same local Volvo dealership in Dalarö, a small village to the south east of Stockholm.[29] In addition to this film, a four minute documentary of the documentary, calling into question the validity of the events, was posted as Soto's "personal edit" on his alleged homepage.[30]

The S40 was the first Volvo car to be launched in China by the brand under the Changan Ford joint venture and commenced production in March 2006. Engines choices consisted of the 2.0, 2.4 and 2.5 litre petrol engines paired with either a 5 speed manual or 6 speed dual clutch gearbox.

The S40 was refreshed for April 2007. Improvements include improved audio systems, increased storage space and new safety features like emergency brake lights which flash rapidly during hard braking to alert traffic behind the car. The new S40 also comes with optional active bi xenon headlights which point the light beam in the direction of the road as it curves (standard in SE Lux models).

There was also an optional BLIS (blind spot information system) camera located on the side mirrors which alerts the driver of passing vehicles beside the car.

Volvo released the 2.0 litre diesel Powershift on the third week of February 2008, except in Ireland, where it was released in the last week of May, because of delivery intervals.

The model of 2009 saw rear end boot lid changes, with wider spacing of the 'Volvo' lettering and larger characters, as in the newer Volvo models.[31]

In 2010, the new, larger, circular Volvo logo appeared on the front grille, in the United States, a manual transmission was briefly available with the T5 AWD version. In North America, the naturally aspirated five cylinder engine, all wheel drive, and manual transmission were all dropped for the model year of 2011, leaving only the automatic, front wheel drive T5 in base and R-Design trims.[32] The model year of 2011 was the last for the S40 in the United States and Canada.

The range now included three petrol engines (1.6, 2.0 and T5, the latter only available with front-wheel drive and automatic transmission), four diesel engines (the existing DRIVe and the new D2, D3 and D4) and the 2.0F flexible-fuel engine that can run either on normal petrol or E85, an ethanol petrol mixture. Production ended in May 2012.

The updated 2.0 and T5 and the new D2, D3 and D4 are compliant with the Euro 5 emission standard (the rest are Euro 4 compliant), and the DRIVe included a start-stop system for reduced fuel consumption and emissions.[34] New six speed gearboxes are used in the D2 (manual: B6 D2), D3 and D4 (manual: M66D, automatic: Aisin AWF21).[35]

Note updated: In 2012 the last variant of the S40 2.0 Comfort, was the same 2.0 Petrol Engine, but with a PowerShift 6 speed automatic transmition. Adding to this, was a little differences in headlights and tile lights.