The Holden Commodore (VP) is a full-size car that was produced by Holden from 1991 to 1993. It was the second iteration of the second generation of the Commodore. Its range included the luxury variants, Holden Berlina (VP) and Holden Calais (VP). 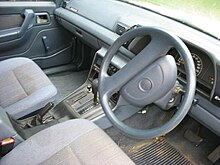 The VP series was released in September 1991 with mainly cosmetic and feature changes to the outgoing VN Series Commodore. It launched shortly after the Ford EB Falcon. The 3.8 litre V6 and 5.0 litre V8 engines from the VN were carried over, but the V6 engine received various revisions that improved its refinement and noise characteristics as well as boosting power by two kilowatts. The 2.0 litre straight-4 engine which had been offered on the VN in certain export markets was discontinued. Semi-trailing arm IRS became standard on Calais and Commodore SS models and became an optional extra on lower-end models. This new suspension drastically improving ride and handling over that offered by the live rear axle. ABS brakes were also introduced in the VP range as an option on Series 1 Calais and Commodore SS models, and on most models with IRS for Series II versions which launched in January 1993. Additional security features were introduced across the range, including an ignition-disabling device and a driver's door deadlock. Central locking and power mirrors were also a standard feature across the model range.[1] The VP series was replaced in July 1993 by the VR Series Commodore.

The Commodore Executive was the base model of the range.

The Commodore S was the cheapest sports variant of the range. It was essentially similar to the Executive, but with sports trim similar to the SS model.

The Commodore SS was the top-of-the-line sports model of the range with a V8 engine.

The Commodore Berlina was the cheapest luxury variant of the range.

The Commodore Berlina LX was the semi-luxury version of the range. This model was essentially a stepping stone between the Berlina and Calais. The VP was the only version to offer this trim level.

The Calais was the luxury version of the range. It was however not badged or marketed as a Commodore.

Limited edition and other specification levels

The SS V6 was a 1992 limited production model which had all the features of the regular Commodore SS but utilized the 3.8L V6 engine in place of the 5.0L V8. It was produced to homologate a suitable model for the Group 3E Series Production Cars motor racing category, which required a small minimum run of cars to be built. The SS V6's main rival was the Ford EB2 Falcon XR6.

The Commodore BT1, or the Police Pack was a special pack for the VP Commodore that was available to the Australian and New Zealand Police Forces. It was based on the Commodore Executive and added various specification upgrades to cater to the needs of the Police Force. Many believe that BT1 Commodores had a "cop chip" which increased the engine power output, however this is a myth, as the engine power is the same as in regular VP Commodores. BT1 with IRS had a standard size fuel tank, not a long range tank as found on other models.

Although the pack varied in each state, they were commonly fitted with:

The Calais International was a limited edition model based on the VP Calais and released in September 1992. A total of 300 were built, 150 in Alaskan White and the same number in Anthracite Grey. All were equipped with the V8 engine and automatic transmission and the exterior featured Commodore SS lower kit (with fog lights) and a Holden VQ Caprice bootlip as well as unique International badges. The paint was single colour, unlike the standard Calais which had a grey lower half. Standard wheels were the 15in alloys from the VQ Statesman but with Holden logos in the centre cap and the interior was black over tan, with tan partial leather/suede seats, and special leather SS style steering wheel.

A badge engineered variant of the Holden VP was marketed by Toyota as the Toyota Lexcen.[2] The T2 series Lexcen was available in CSi, VXi, and Newport trim levels,[2] with a choice of sedan and wagon body styles.[3] It was offered only with the 3.8 litre V6 engine and the four speed automatic transmission, the V8 not being available in the Lexcen.[3]

A utility variant of the VP Commodore was also produced and launched in January 1992.[citation needed] It was marketed as the Holden Ute and was not badged as a Commodore. No Toyota equivalent was ever produced.

The VP GTS program was rushed into production to compete with the ford EB GT in September 92. Essentially a parts bin special from the VN GRP A model, Like motor, brakes, spoiler kit. Being very popular at the time HSV continued with the GTS label, as HSV's top of the range performance model,[4] with some 130 produced in total. As in the case of the VN series, a V6 version was sold exclusively in New Zealand.

The VP series Maloo utility was released in March 1992. Only 49 examples were made in the thirteen months of production, of which 15 were special HSV Fifth Anniversary Edition models, and the final eight were All-Black limited editions. These exclusive build quantities confirm the VP series to be the least production numbers Maloo ute of all.[5]

The VP Senator 5000i was introduced in June 1992, effectively replacing the VP SV 91 as HSV most luxurious well appointed model, and is equivalent of the VN SV 5000 model. Exclusive colours called Senator Quartz either soft purple or Dark grey metallic are only available on Senator 5000i model. Other features that distinguishes the 5000i over the base model Senator are leather bolstered , velour trimmed Group A devenish front seats, and a Caprice rear bench seat, with a suede trimmed centre console. Brakes from the VN GRP A , Variotronic power steering rack, 5000i badges & Rear boot 5000i decal, level ride suspension, three different engine cover colours - Red - Maroon - Orange - indicating a 200KW motor, ABS, Fog lights from the Caprice is standard for the 5000i model [6] The Senator was created in an attempt to design a vehicle that offered both luxury and performance as well as to complement the existing long-wheelbase Statesman models. Offering smoother styling compared to the HSV Clubsport and GTS models, which favoured performance rather than luxury, the Senator took advantage of the independent rear suspension which was offered on high-priced VP Commodores and Statesman/Caprices at the time and was only one of a handful of Commodore-based cars that had automatic climate control air conditioning. Other features included a leather interior, cruise control and limited slip differential. A three-spoke steering wheel was featured. Top speed was 220 km/h (137 mph). The car is available with HSV's 180 kW (241 hp) 5.0-litre V8 engine coupled to a four-speed automatic transmission or five-speed manual. There was actually two versions built: the standard Senator and the Senator 5000i which featured a more powerful 200 kW (270 hp) engine and a 238 km/h (148 mph) top speed. The 5000i was only available with the automatic option.[7] The total number built for both versions was 337.[8]