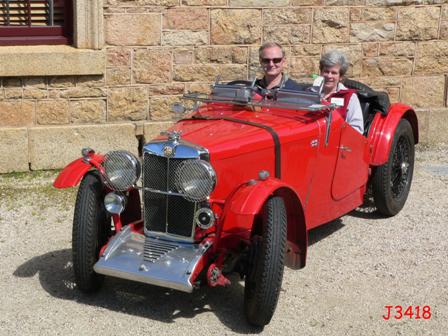 Australia and sold the car to Alan Bail in 1968.  By 1982 Alan’s enthusiastic driving

resulted in a thrown connecting rod, and the car passed wounded, with a non-

standard crankcase inspection opening, to the Jacksons.  A fresh engine was

since.  So after 72 years J3418 has not yet been restored, but somehow survives in

active use after being tarted up by successive owners.  Although being a bit tired,

the car still gained places at Historic Winton in May 2005, as it has for the majority of

Abingdon knew how to build a delightful and durable sports car, which go faster if

they are painted red.