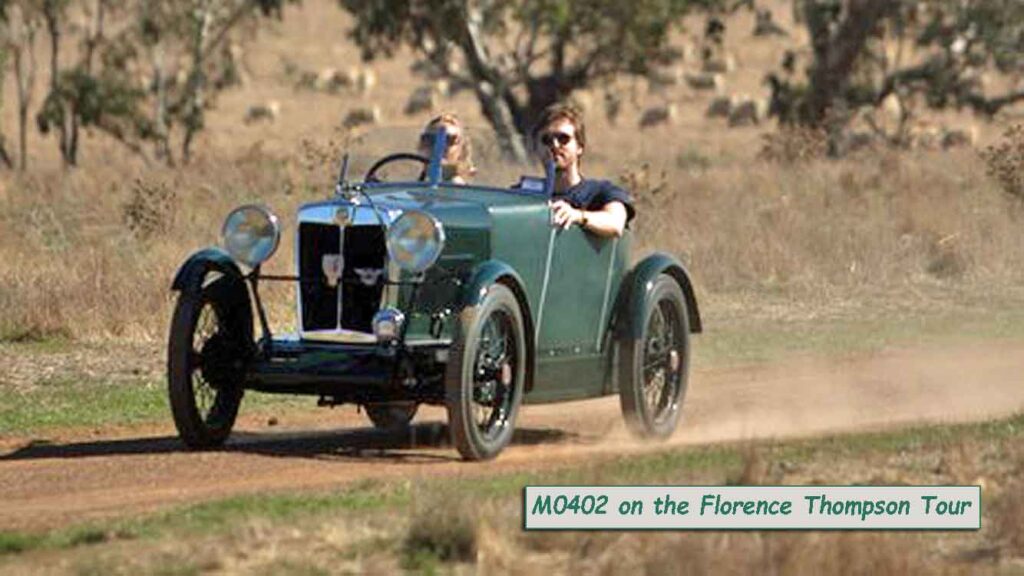 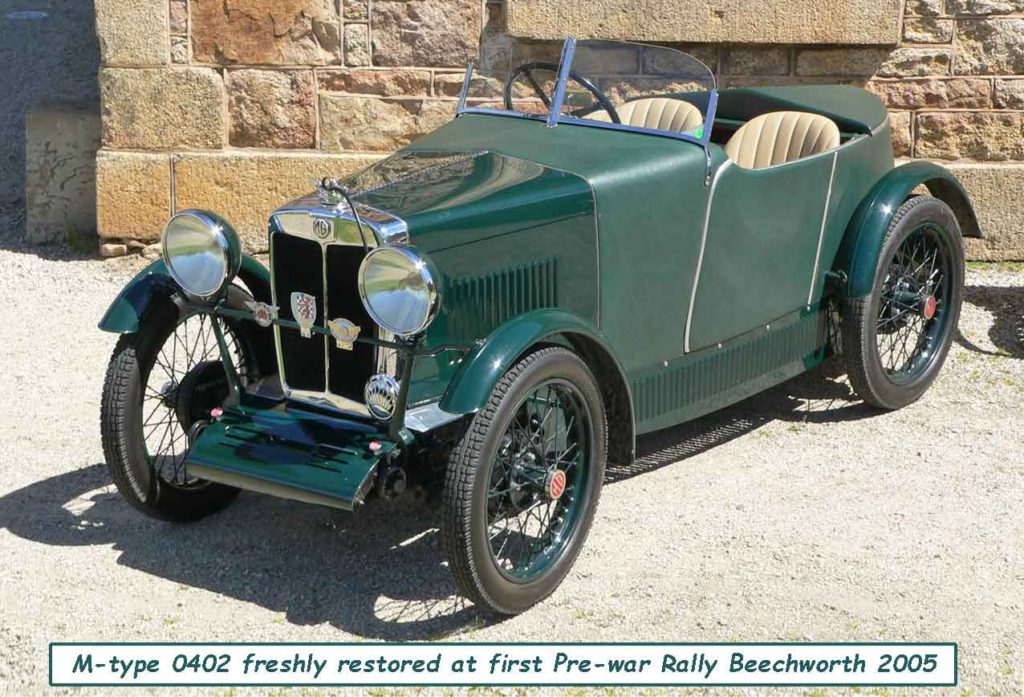 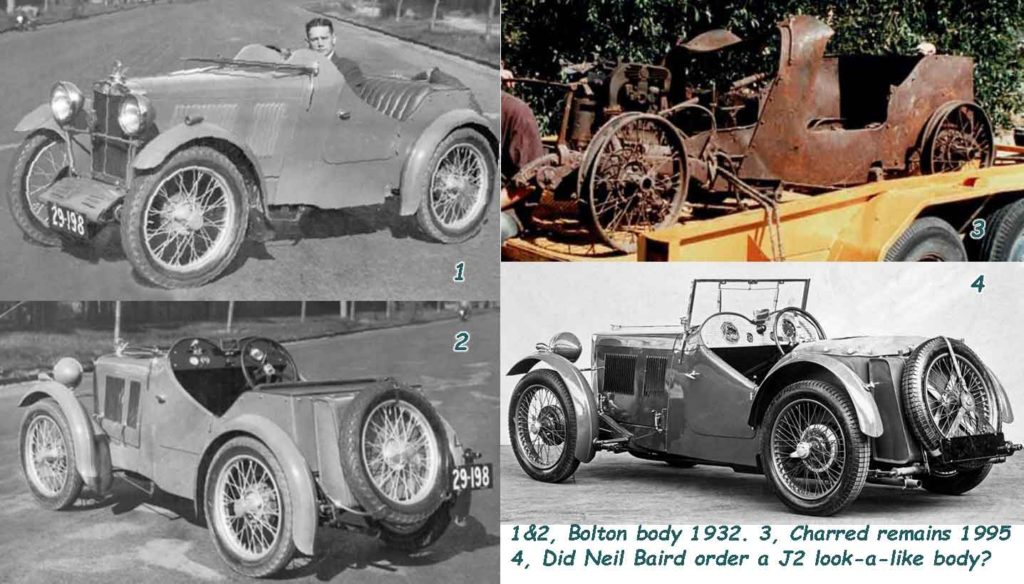 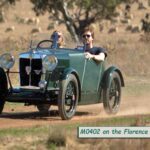 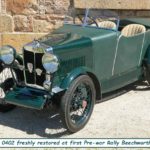 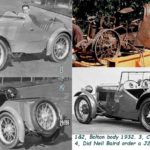 Information: Bought in UK while on honeymoon, shipped to W.A. in 1932, sans body.  New body built by Boltons in J2 style.

Imagine my surprise when I opened the Pre-war M.G. Register’s Newsletter of July 2018 and realised that the superb 1932 photo on the cover was our M-type!  Inside, Mike Sherrell from Perth had written a brief historical summary of this car with yet another photo I had never seen.  So began a flurry of emails with enthusiasts in the West and the story of our car came together.  The lovely photo of the car parked precariously across the road (such a common setting for owners to do in bygone days) shows a young Neil Baird in his newly acquired M-type.

Neil had bought the car while on honeymoon in England circa 1932.  We understand he discarded the original canvas body before importing it in chassis form to Perth where it was the first M.G. Midget in Western Australia.  It may be the first M.G. imported, however a Bullnose M.G. and a 14/40 were also early imports but it is unknown exactly when.  Neil had a new body built in Perth by Boltons based on the lines of the then newly released J-type.

Neil Baird was part of the Baird family; that was Bairds Ltd, which owned large department stores in the West and were subsequently bought out by Myer in 1969.

Neil was born in 1909 dying in 1989.  He had a keen interest in motoring becoming one of the founding members of the WA Sporting Car Club.  We understand that he drove the M.G. in competitive events but a program or photo has eluded us so far.  He did go on to bigger and more powerful cars.  Boltons (1888 until closing in 1972) had a good reputation as car body builders in the early part of the century, but were better known in W.A. as coachbuilders of buses, trailers etc.

Back to the present and Mike Sherrell was in touch with his friend Bob Dethridge who has an incredible knowledge of M.G. ‘doings’ in W.A.  He had obtained these early photos from Neil Baird’s widow, they were apparently taken at Mt Lawley.  According to Bob the next owner was a Mr McCandlish, an ex-motorbike racer who lived in Townsend Road, Subiaco.  Following him was Ralph Siers who was an ex official starter at Caversham owning the car during the 1950s.  I have a grainy photo of him in the car that Vic Longden sent me in 2003.  Vic was also a keen motoring enthusiast but unfortunately he died a few years ago.  At one stage Ralph was living in Freemantle and involved with marine engines.  Ralph then sold the car to Robbie Nesbit of Serpentine who promptly seized its engine.  Robbie was planning a trip to Northam, about 60 miles east of Perth and checked with Ralph if there were any precautions he should take. Ralph suggested increasing the oil pressure but it appears that Robbie turned the oil relief valve the wrong way lessening the oil pressure!  During Bob’s sleuthing he actually spoke to the man who went out and towed Robbie back to town!  Apparently the car was yellow at this time.  Robbie allegedly moved to Taree in NSW but my inquiries recently in that town with a local Nesbit revealed that no Robbie Nesbit was ever known to him.

I can now take over the tale; in 1959 John May bought the car, presumably from Robbie Nesbit, as a potential restoration project but not much happened.  In 1967 he moved to Box Hill in Melbourne bringing the car with him.  Unfortunately in 1982 there was a severe fire in his garage at home and the M-type was extensively damaged.  The car was well known by a number of Pre-war owners and I was told that it could possibly be bought.  By this stage I had acquired a number of Morris Minor parts but a genuine M-type had eluded me.  I went to see the car and met with John but he was very reluctant to part with the car.  I persisted over a period of 10 months and he finally agreed to sell it to me in 1996.  There really wasn’t much that was usable – body badly distorted and heat affected, instruments gone, cam cover melted (sump OK as it had oil in it) etc etc.

Over subsequent years we rebuilt it using a number of Minor parts and simple cycle guards. Naturally we warmed it up – twin carbies, hot cam (hotter than the “Double 12 M-type”) extractors, raised compression and Phoenix crank etc.  We kept the three speed gearbox (with Derrington remote control) but with three new good ratios.  It’s so good I wouldn’t swap it for a 4 speed!  It was such a shame that the body couldn’t be reused – I consulted a number of restorers specialising in bodywork but the heated treated metal was unworkable. Now knowing its history it probably deserved a replica of the original……

However with the enthusiast help of Peter Fleming we built a replica of the original fabric body – actually two, the other is on John Fincher’s car.  We followed exactly the boat-tail style using the original technique of timber framing (we had some framing members from an original car) with thin plywood and vinyl over a foam underlay.  Peter was (and still is!) a fountainhead of knowledge of all things M-type and was able to provide all sorts of information and practical assistance with the many little details.  The car was finally registered in 2000 after five years of restoration – not bad after juggling a busy consulting practice and raising a family!

However there was disaster around the corner.  The next two years saw a cracked block, a failed stitching repair, yet another block and then a gudgeon pin damaging a bore necessitating a sleeve!  Since then it has been indestructible, providing enormous fun in competitive and touring events and always managing to leave a smile on your face!

Our two children have grown up with it and also enjoy the experience, although one has been known to remark that you need a stiff drink and a Panadol after a long blast!

Our daughter Holly and her husband Jonathan recently participated in the Florence Thomson Rally which took part west of Ballarat.  They may have needed a stiff drink and a Panadol.  The rally was promoted by the RACV for only female drivers of classic and historic cars.  Holly drove the M-type which performed faultlessly all day.  Florence Thomson was the only female entrant in the 1905 “Dunlop Reliability Motor Contest” from Sydney to Melbourne which the RACV considers worth celebrating.  It is an annual event and extremely well organised with good roads and many points of interest.