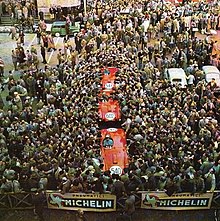 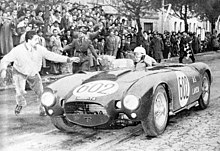 Excited spectators as Alberto Ascari wins in his Lancia D24.

This Ferrari 500 Mondial got 2nd place, driven by Vittorio Marzotto

Umberto Maglioli in his Ferrari 375 Plus at start in Brescia

The 1954 Mille Miglia (officially XXI Mille Miglia [1]), was a motor race open to Sports Cars, GT cars and Touring Cars. It was the 21st Mille Miglia and the third race of the 1954 World Sportscar Championship. The race was held on the public roads of Italy on 2 May 1954 using a route based on a round trip between Brescia and Rome, with the start and finish in Brescia.[2] It was won by Alberto Ascari driving a Lancia D24.

As in previous year, the event is not strictly a race against each other, as is a race against the clock. The cars are released at one-minute intervals with the larger professional class cars going before the slower cars, in the Mille Miglia, however the smaller displacement slower cars started first. Each car number related to their allocated start time. For example, Giuseppe Farina’s car had the number 606, he left Brescia at 6:06am, while the first cars had started late in the evening on the previous day.[2]

The previous August, Italian racing legend Tazio Nuvolari died. As a mark of respect, the route of this race, near it finish would pass through Mantua, where he was a resident.[3]

A total of 483 cars were entered for the event, across nine classes based on engine sizes, ranging from up to 750cc to over 2.0 litre, for Grand Touring Cars, Touring Cars and Sport Cars. Of these, 378 cars started the event.[2]

Fresh from their loss in Florida at the 12 Hours of Sebring, Lancia entered in force with four newly revised D24 cars, these were piloted by Piero Taruffi, Alberto Ascari, Eugenio Castellotti and Gino Valenzano. The cars were modified by race car designer Vittorio Jano. These enhancements featured an enlarge version of their V6 engine, so that could produce 265 bhp.[3]

Ferrari for their part arrived with four 300 bhp 4.9 litre, Ferrari 375 Plus’s for Giuseppe Farina, Umberto Maglioli, Giannino Marzotto and his brother . For 1954, the Mille Miglia was a round of the World Sports Car Championship; the home teams faced strong challengers. From Great Britain, came Aston Martin and Austin-Healey, and West Germany sent Porsches.[3][4]

Also amongst the entry was the four-time winner, Clemente Biondetti, but by the time of the race, he was very sick man, fighting cancer, and only had a few months left to live.[3]

The race started at 21:01 on 1 May, when and departed Brescia in their Iso Isetta. The faster car would leave the following morning, when conditions were foggy mixed with little rain. After nine and half hours, all the cars were on their way to Rome.[2][3]

The Lancias took the early lead, with Taruffi’s D24 controlling the pace, averaging 108.9 mph, on the opening stages into Ravenna, with a lead of 90 seconds, over Ascari and Castellotti. The Ferrari of Maglioli was back in fourth. On the run into Rome, the Lancia of Castellotti developed distributor problems, and was forced into retirement, moving Maglioli into third. Further trouble hit the Lancia of Taruffi, when his sprung an oil leak and he soon retired. Ascari had taken it easy in the early stages, now assumed the lead.[2][3]

On the run back to Brescia, Ascari’s Lancia suffered a throttle spring return failure, and this was temporarily replaced by a rubber band. This and other problems started to affect the Lancia and by the time Ascari reached Florence, he had enough and wanted to retire from the event. It was only after a long stop for repairs, he was persuaded to continue. By Bologna, all the top Scuderia Ferrari cars were out, and the path was clear for Ascari to win.[3]

For Ferrari, they had not lost a Mille Miglia since 1947, but this they were sounded thrashed by the team from Torino, with Ascari, winning in a time of 11hr 26:10mins., averaging a speed of 72.80 mph. 33:51mins adrift in second place was Ferrari 500 Mondial of Vittorio Marzotto, who salvaged some honour for Maranello marque with second place and a class win. The third different car on the podium was the Maserati of Musso. Another Ferrari came home in fourth, driven by Biondetti, in what was to be his last Mille Miglia; he was lifted exhausted from the car at the finish.[3][5][6][7]

With the British attack failing to make it back to Brescia, it was left to the Germans to provide some opposition to the Italian teams. Encountering a lowered gate at a railway crossing, the Porsche driver, Hans Herrmann drove his low 550 Spyder under it, narrowly missing an express train. This daring act gave Porsche a first in class and an amazing sixth overall.[2][8]

The event was marred by two fatal accidents, which cost the French driver, his life and that of his co-driver and eight spectators injured when his Citroën 15 Six crashed into a signpost near Vicenza. The second accident cost the Italian navigator, his life when crashed his Maserati A6GCS.[9][10][11]

Of the 378 starters, 182 were classified as finishers. Therefore, only a selection of notably racers has been listed below.

Class Winners are in Bold text.