Honda-brand automobile models include the Accord, Civic, CR-V, HR-V, Element, Clarity Fuel Cell, Fit, Insight, Odyssey, Pilot and Ridgeline. Acura-brand models are the RL, TLX, RLX, ILX, MDX, RDX, TSX, TL and ZDX. Honda claims several firsts for a Japanese car maker in the United States. The company was the first to create a subsidiary to market and sell its vehicles in the country, and the first to manufacture automobiles in North America.[1][2][3]

American Honda Motor Co., Inc., Honda's first overseas subsidiary opened in Los Angeles in 1959 which was unusual for the time, as other foreign auto companies typically relied on independent distributors.[3] 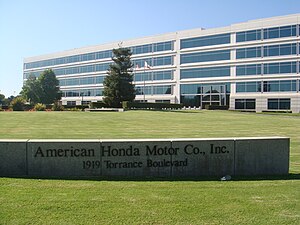 American Honda Motor Co., Inc., Honda's first overseas subsidiary,[1] opened in Los Angeles on June 11, 1959[4] with capital investment of $250,000 and three employees.[5] The creation of a subsidiary was unusual for the time, as other foreign auto companies typically relied on independent distributors.[3] The headquarters in 1959 were at 4077 West Pico Boulevard in Los Angeles.[6] The office was moved to the nearby suburb of Gardena at 100 West Alondra in 1963. In 1990, they relocated to 1919 Torrance Boulevard in Torrance, California in the Los Angeles metropolitan area. The Honda headquarters have 101 acres (41 ha) of space.[7]

In 1960, the first full year of operations, American Honda sold fewer than 2,000 motorcycles through three product lines: the Dream, Benly and Honda 50 (Super Cub). The following year, Honda established 500 motorcycle dealers and spent $150,000 on advertising in regions where it operated. Honda's expansion into new U.S. markets was undertaken one region at a time over a five-year period, starting on the West Coast and moving east, creating new demand for motorcycles.

Sales in the U.S. did not increase notably until 1963, when the company launched its "You meet the nicest people on a Honda" advertising campaign, the first of its scale to position motorcycles to mainstream Americans.[8][9] By the end of the year, Honda had sold more than 100,000 units in the U.S., more than all other motorcycle manufacturers combined.[10] Expansion at this time led the company to move to a new headquarters facility in Gardena, California, in September 1963, and total unit sales in 1964 represented nearly half of the U.S. motorcycle market.[3]

Honda had an easier time expanding in the U.S. than in Japan, where Honda first began as a motorcycle manufacturer, only later entering the automobile market in competition with other established competitors including Toyota and Nissan. By 1983, Honda had 805 dealerships in the U.S.[2] In the early 1990s, Honda sold two cars in the U.S. for every one car it sold in Japan.[3] In 1990, American Honda took up residence in its current headquarters facility in Torrance, California. Following the death of founder Soichiro Honda in 1991, the company's global operations were re-organized, forming four regional operations including North America.[3]

Honda first introduced passenger cars to the North American market in 1970 with sales of the Honda N600 sedan through 32 dealers in the western United States. The first Honda car sold in the United States was sold and retired at the same dealership at Manly Honda, in Santa Rosa, California; however, sales of the vehicle and subsequent model, the Z600 coupe, only reached 20,000 units in 1972. During the 1970s energy crisis, however, lightweight, fuel-efficient cars experienced a surge in demand. The Honda Civic, introduced in 1973, became popular in the United States, leading a significant expansion of Honda into the American market.

By 1976, the company had 630 automobile dealers, and Honda followed the Civic with the Accord hatchback, which became the best-selling passenger car in the United States from 1990 to 1992.[3] In 1977, the company partnered with J.D. Power and Associates to conduct a survey of its U.S. dealers and customers concerning their satisfaction with Honda. The initiative led to the creation of the J.D. Power and Associates Customer Satisfaction Index.[12]

Following the Accord's success with middle-class customers, Honda became the first Japanese automaker to enter the luxury automobile market, in 1986, when it launched the Acura brand. In 1987, Acura became America's best-selling import luxury nameplate with its Integra and Legend product lines.[3] To differentiate the brand from its Honda line, the company created a second, completely new dealer network, requiring that Acura dealerships be located a minimum of 10 miles (16 km) from existing Honda outlets, and requiring each to invest $3 million to get started.[13] Nearby at 19988 Van Ness Ave, Honda maintains the American Honda Museum collection, which is not open to the general public, but can be viewed by appointment for group visits.

Honda has also had several firsts in the area of advanced environmental vehicles. In 1974, the Civic CVCC was introduced as the first car to meet 1970 U.S. Clean Air Act requirements without the need for a catalytic converter and using either regular or unleaded gasoline, and was also rated #1 in fuel economy by the United States Environmental Protection Agency in its first ranking of America's most fuel-efficient automobiles.[14]

In December 1999, it launched the Honda Insight, America's first gas-electric hybrid car.[15] It later released the Civic Hybrid, the first application of hybrid technology to an existing, mass-produced automobile; and the Accord Hybrid, the U.S. market's first V-6 hybrid car.[16] A second-generation Insight hybrid was launched in 2009,[17] followed in 2010 by the CR-Z, a two-passenger car which was the first hybrid automobile available with a 6-speed manual transmission.[18]

As of 2011, Honda is the sole automaker in America marketing a mass-produced natural gas vehicle, the Civic GX, which is produced at its plant in Greensburg, Indiana. The Civic GX was recognized by the American Council for an Energy-Efficient Economy (ACEEE) as the "greenest vehicle" in 2010; representing the seventh consecutive year receiving this distinction.[20][21]

Honda offered the first fuel cell electric vehicle to retail customers in the United States, with its first generation FCX vehicle in December 2002. In 2008, Honda introduced an all-new FCX Clarity, a fuel cell sedan, which in 2010 was in the hands of more than two dozen retail customers based on lease sale agreements.[22][23]

In January 2010, the company began operating its third version of a prototype solar-powered hydrogen refueling station for fuel cell electric vehicles on its Torrance, California, campus. The station utilized Honda developed and manufactured thin-film solar cells to provide energy for the reformation of hydrogen from water via electrolysis, producing enough hydrogen to power a fuel cell electric vehicle 10,000 miles per year via a daily, eight-hour overnight fill.[24]

During the next 10 years, Honda expanded its auto manufacturing presence, and as of 2010, the company was operating nine U.S. plants in six states. Collectively, these plants produce Honda and Acura automobiles, engines and transmissions, as well as Honda all-terrain vehicles and Honda power equipment products. In 2010, Honda America continued construction on two new factories in North Carolina, one for the production of the HondaJet very light jet, in Greensboro, and a second to produce its GE Honda HF120 turbofan engines, in Burlington.[25][26][27]

Honda established U.S. research and development operations in Southern California in 1975 as Honda Research California, an arm of American Honda Motor, Co., Inc. In 1979, Honda Research of America, Inc. (HRA) was created as a subsidiary of Honda R&D Co., Ltd. As of 2010, the company operates as Honda R&D Americas, Inc. with 14 facilities in North America, including two product research and design studios for Honda and Acura, in Torrance, California, an automobile and motorcycle new-model development center in Raymond, Ohio, and a power equipment research, development and testing center in Swepsonville, North Carolina.[9]

In the 2000s (decade), the company created two generations of the Honda Pilot and Acura MDX sport-utility vehicles; three generations of the Acura TL sedan; the Honda Element SUV; the 2006 Honda Ridgeline, Honda's first U.S. pickup truck; and the 2010 Acura ZDX crossover coupe. Both the 2001 MDX and 2006 Ridgeline earned recognition as North American Truck of the Year, as well as Motor Trend SUV of the Year (MDX)[28] and Truck of the Year (Ridgeline),[29] while the Pilot received five consecutive "5 Best Truck" awards from Car and Driver magazine (2003–2007).[30]

In model year 2010, one-third of the Honda and Acura models sold in the U.S. and five of the eight light-trucks were models developed by Honda R&D Americas.[31] In September 2010, the third generation Honda Odyssey minivan was released as a 2011 model, the most recent vehicle developed by the company exclusively in the U.S.[32]

American Honda joined U.S. open-wheel racing competition with its entry into the Championship Auto Racing Teams (CART) series in 1994, following Honda's six consecutive Formula One World Championships from 1986 to 1991. The company, under the auspices of its U.S. racing subsidiary, Honda Performance Development (HPD), captured six Driver's Championships and four Manufacturer's titles, winning 65 of 164 races between 1992 and 2002.[33]

Since 2007, HPD has also provided engines to prototype-class teams in American Le Mans Series sports-car racing, and these engines have scored numerous victories, beginning with an LMP2-class win in Honda's inaugural ALMS race, at Sebring in 2007. HPD was the first manufacturer to score ALMS class wins in both LMP1 and LMP2 on the same weekend with its wins at St. Petersburg in 2009. HPD went on to win LMP1 and LMP2 Manufacturers' Championships for Acura in 2009. In 2010, the company began providing engines and support for sports-car competition in both America and Europe, earning a class win in its inaugural attempt at the 24 Hours of Le Mans.[35]

During its history in the United States, Honda has had several taglines and produced a number of noteworthy advertising campaigns. Honda's first advertising slogan, promoting the Honda motorcycle to young families, was "You meet the nicest people on a Honda."[8][9] The company's slogan for its automobiles from 1977 - 1984 was "We make it simple" (replacing the tagline "What The World Is Coming To" when the Civic was the only automobile marketed). By 1983, Honda's advertising budget, sponsoring National Football League games and other sporting events, rivaled the cost of building its Marysville motorcycle plant.[2] In September 2007, the company launched its current marketing slogan, "Honda: The Power of Dreams".[36] The early 2010s ad campaign for its automobile lineup opens up with a doorbell sound that recalls the "Honda" choir audio tagline from the 1980's.

In 2009, American Honda released the Dream the Impossible documentary series, a collection of 5–8 minute web vignettes that focus on the core philosophies of Honda. Current short films include Failure: The Secret to Success, Kick Out the Ladder and Mobility 2088. They feature Honda employees as well as Danica Patrick, Christopher Guest, Ben Bova, Chee Pearlman, Joe Johnston and Orson Scott Card. The film series plays at dreams.honda.com.

In Southern California, Honda employees from the region are dressed in blue polo shirts appear on commercials titled "Random Acts of Helpfulness" on radio and television in English and Spanish and helped hundreds of families succeed with "Random Acts of Helpfulness". They also announce which Honda vehicles are the best selling vehicles in California.