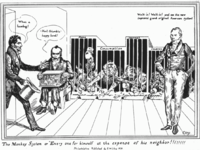 The Monkey System or Every One For Himself Henry Clay says "Walk in and see the new improved grand original American System!" The cages are labeled: "Home, Consumption, Internal, Improv". This 1831 cartoon ridiculing Clay's American System depicts monkeys, labeled as being different parts of a nation's economy, stealing each other's resources (food) with commentators describing it as either great or a humbug.

The American System was an economic plan that played an important role in American policy during the first half of the 19th century. Rooted in the "American School" ideas of Alexander Hamilton, the plan "consisted of three mutually reinforcing parts: a tariff to protect and promote American industry; a national bank to foster commerce; and federal subsidies for roads, canals, and other 'internal improvements' to develop profitable markets for agriculture".[attribution needed][1] Congressman Henry Clay was the plan's foremost proponent and the first to refer to it as the "American System".

A plan to strengthen and unify the nation, the American System, was advanced by the Whig Party and a number of leading politicians including Henry Clay and John Quincy Adams. Motivated by a growing American economy bolstered with major exports such as cotton, tobacco, native sod, and tar they sought to create a structure for expanding trade. This System included such policies as:

Clay protested that the West, which opposed the tariff, should support it since urban factory workers would be consumers of western foods. In Clay's view, the South (which also opposed high tariffs) should support them because of the ready market for cotton in northern mills. This last argument was the weak link. The South never strongly supported the American System and had access to plenty of markets for its cotton exports.

Portions of the American System were enacted by the United States Congress. The Second Bank of the United States was rechartered in 1816 for 20 years. High tariffs were first suggested by Alexander Hamilton in his 1791 Report on Manufactures but were not approved by Congress until the Tariff of 1816. Tariffs were subsequently raised until they peaked in 1828 after the so-called Tariff of Abominations. After the Nullification Crisis in 1833, tariffs remained the same rate until the Civil War. However, the national system of internal improvements was never adequately funded; the failure to do so was due in part to sectional jealousies and constitutional squabbles about such expenditures.

In 1830, President Jackson rejected a bill which would allow the federal government to purchase stock in the Maysville, Washington, Paris, and Lexington Turnpike Road Company, which had been organized to construct a road linking Lexington and the Ohio River, the entirety of which would be in the state of Kentucky. Jackson's Maysville Road veto was due to both his personal conflict with Clay and his ideological objections.

The establishment of a protective tariff, a 20%–25% tax on imported goods, would protect a nation's business from foreign competition. Congress passed a tariff in 1816 which made European goods more expensive and encouraged consumers to buy relatively cheap American-made goods.

The establishment of a national bank would promote a single currency, making trade easier, and issue what was called sovereign credit, i.e., credit issued by the national government, rather than borrowed from the private banking system. In 1816, Congress created the Second Bank of the United States.

The improvement of the country's infrastructure, especially transportation systems, made trade easier and faster for everyone. Poor roads made transportation slow and costly.

The American System became the leading tenet of the Whig Party of Henry Clay and Daniel Webster. It was opposed by the Democratic Party of Andrew Jackson, Martin Van Buren, James K. Polk, Franklin Pierce, and James Buchanan prior to the Civil War, often on the grounds that the points of it were unconstitutional.

Among the most important internal improvements created under the American System was the Cumberland Road.

Henry Clay's "American System," devised in the burst of nationalism that followed the War of 1812, remains one of the most historically significant examples of a government-sponsored program to harmonize and balance the nation's agriculture, commerce, and industry. This "System" consisted of three mutually reinforcing parts: a tariff to protect and promote American industry; a national bank to foster commerce; and federal subsidies for roads, canals, and other "internal improvements" to develop profitable markets for agriculture. Funds for these subsidies would be obtained from tariffs and sales of public lands. Clay argued that a vigorously maintained system of sectional economic interdependence would eliminate the chance of renewed subservience to the free-trade, laissez-faire "British System."