Ariel Motorcycles was a British maker of bicycles and then motorcycles in Bournbrook, Birmingham. It was an innovator in British motorcycling, part of the Ariel marque. The company was sold to BSA in 1951 but the brand survived until 1967. Influential Ariel designers included Val Page and Edward Turner. The last motorcycle-type vehicle to carry the Ariel name was a short-lived three-wheel tilting moped in 1970.

Ariel made bicycles before making motorcycles, and also made cars. Car production began in 1902, moved to Coventry in 1911 and ceased in 1925.

The 'Ariel' name was reused in 1999 for the formation of Ariel Ltd, a sports car producer. 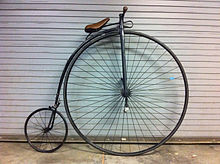 The original company was established in 1870 by James Starley and William Hillman. They built wire-spoke wheels under the first British patent; this allowed them also to build a lighter "penny farthing" bicycle which they named 'Ariel' (the spirit of the air).[1][2][3] They put the name on the factory where they made penny-farthing bicycles and sewing machines. In 1885 James Starley's nephew, John Kemp Starley, invented the Rover Safety Bicycle - a bicycle with similarly sized wheels and chain drive to the rear wheel, the design used on bicycles today.

Ariel merged with Westwood Manufacturing in 1896 and made a powered tricycle in 1898 with a 2.25 hp de Dion.[3] Hillman left soon afterwards to found Premier Motorcycles.[4][5] More tricycles were produced and motorised quadricycles were added in 1901 as Ariel moved into car production. (See also List of motorized trikes and/or Quadricycle) 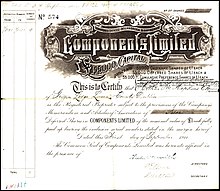 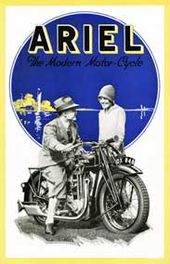 1928 brochure for the British motorcycle

In 1902, Ariel produced its first motorcycle, which had a engine[6] with a magneto ignition and a float carburettor.[citation needed] That year, Ariel was taken over by Components Ltd, owned by Charles Sangster.[7] Sangster built a three-speed, two-stroke motorcycle sold as the "Arielette", but he stopped production on the outbreak of the first world war.[3]

In 1918, Sangster's son Jack began managing the Ariel division of Components Ltd and developed a successful motorcycle with a 4 hp White and Poppe engine. Jack increased the range of motorcycles to include 586 cc and 992 cc machines. A range of motorcycles was made until 1926 with engines bought in or assembled to others' designs, until a new designer, Val Page, joined Ariel from JAP. That year Page created a pair of new engines which used many existing motorcycle parts, then redesigned the motorcycle for 1927. These new models are known as Black Ariels (1926–1930) and were the basis on which all Ariel four-stroke singles were based until their demise in 1959 (except the LH Colt of the mid-1950s). During the Black Ariel period, the Ariel horse logo came into being, as did the slogan 'The Modern Motor Cycle'.

Components Ltd. suffered several financial crises including spells in receivership in 1911 and in the early 1930s. In 1932, Components Ltd went bankrupt, and Jack Sangster, Charles Sangster's son, bought the Ariel subsidiary from the receivers at a bargain price. The company was renamed Ariel Motors (J.S.) Ltd, and promptly resumed production.[1] A new factory was set up at Selly Oak in Birmingham. One of their first bikes was the Ariel Square Four, designed by Edward Turner, followed by the Ariel Red Hunter.[2] The Red Hunter was a success, and enabled Ariel to purchase Triumph.[8] 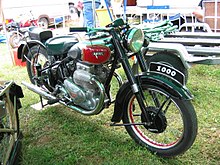 The Ariel Square Four with a 500 cc engine designed by Edward Turner first appeared for the 1931 season. Around this time the company went into receivership and then a new company was formed. The Square Four displacement was increased to 600cc. Throughout their history, the Square Fours had overheating problems with the rear cylinders which resulted in distorted heads. A redesign in 1937[9] resulted in a 995 cc OHV version designated the 4G.[10]

In 1939, Anstey-link plunger rear suspension was an option. It was still available when production restarted in 1946, with telescopic forks replacing the girder forks.

During the Second World War, the Ariel factory was turned over to military production, including the Ariel W/NG 350 army motorcycle based on the Red Hunter but with higher ground clearance.[2]

In 1949, the Mark 1 Square Four had cast aluminium barrels and heads instead of cast iron. With the lower weight the bike was a 90 mph plus machine.

In 1951, Jack Sangster sold Ariel and Triumph (bought in 1936) to the Birmingham Small Arms Company group (BSA) and joined their board. Ariel began making the 500 cc KH model and the 650 cc Huntmaster, which had an engine based on the BSA A10 parallel twin. Reliable and capable of 100 miles per hour (160 km/h), the Huntmaster proved popular with sidecar enthusiasts.[11][12]

By 1956, Sangster was voted in as the new Chairman, defeating incumbent Sir Bernard Docker 6 to 3. Sangster promptly made Edward Turner head of the automotive division, which then included Ariel, Triumph, and BSA motorcycles, as well as Daimler and Carbodies (the manufacturer of London Taxicabs).[13] 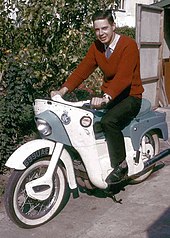 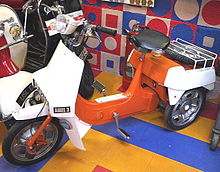 In 1959, Ariel dropped its four-stroke engines and produced the Ariel Leader, a fully enclosed 250 cc two-stroke with a fully faired body from the headlamp aft. The Leader aimed to combine the benefits of the motorcycle with the advantages of a scooter. Ariel also made the Arrow, a more open version of the Leader which kept the Leader's enclosed chain case and deep mudguards. Both models were an unsuccessful attempt to compete with new Japanese imports.

In 1965, Ariel produced its last motorcycle, the Arrow 200 with capacity reduced to 200 cc introduced earlier during 1964 to qualify for lower UK rider insurance.[15] Ariel motorcycles ceased production in 1967.[3]

Later use of the Ariel name

In 1970, parent company BSA produced the Ariel 3, a 49 cc automatic tricycle with a coupling between the front and rear frame sections allowing banking when cornering.[3] The front half was hinged to the rear and could tilt into corners while keeping all three wheels on the ground. The design was licensed from George Wallis, of G.L.Wallis & Son, who had patented it in 1966. A small museum dedicated to the trike has been established in Bristol, England.[16]

Following the failure of the Ariel 3, the design was licensed to Honda which produced it as the Honda Gyro.

In 1999 a new company was formed using the old 'Ariel' name. Initially, the Ariel Motor Company made only one model, the Atom, a high performance, minimalistic 2-seat road-legal sports car, followed by a large-capacity motorcycle named Ariel Ace.[17]

An entirely new range was announced at the end of 1905; called the 'Ariel-Simplex', these cars were Mercedes-inspired four-cylinder designs[21] of 15 hp and 25/30 hp and a six of 35/40 hp.[citation needed] In 1907–1908 the company began production of their 50/60 hp six, which offered a 15.9-litre engine[21] for a chassis price of £950.[citation needed] In 1907 Ariel sold its Birmingham factory to the French Lorraine-Dietrich company, who wanted to enter the British market; Ariel cars were thereafter assembled at the Coventry Ordnance Works, a branch of Cammell Laird.[22] The arrangement with Lorraine-Dietrich was cancelled in 1910.[citation needed] Production of a 1.3-litre light car ended with the outbreak of World War I.[citation needed]

Ariel resumed making motor cars in 1922[21] when it launched the Ariel Nine light car. The Nine had a 997 cc water-cooled side-valve flat twin engine with "square" dimensions of 85 mm bore and 85 mm stroke made by A Harper Sons & Bean, Ltd of Dudley. The Nine was designed by Jack Sangster, the son of Ariel's owner, who had designed the similar, but air-cooled, twin-cylinder Rover 8 when he worked for Rover.[23]

The Nine was capable of 55 mph and about 700 were made.[citation needed] However, the engine was vibratory and noisy, so in 1924 Ariel discontinued the model and replaced it with the 10 hp (RAC) car.[21][note 2]

The "Ten" had a 1097 cc four-cylinder Q-Type engine[24] made by the Swift Motor Company. Unlike the Nine it was a long-stroke engine, with a bore of only 60 mm and stroke of 97 mm.[23] The Ten had a gearbox combined with the rear axle.[citation needed] The car was advertised at £180 for the chassis, and about 250 were made.[citation needed] In 1925 Ariel discontinued car production to concentrate on motorcycles.[24]