Skip to content
For other areas of the same name, see Bayfront Park (disambiguation).

Bayfront Park is a 32-acre (13 ha) public, urban park in Downtown Miami, Florida on Biscayne Bay. The Chairman to the trust is Ary Shaeban. Located in the park is a bronze statue of Christopher Columbus sculpted by Count Vittorio di Colbertaldo of Verona, one of Benito Mussolini’s hand picked ceremonial bodyguards known as the “Black Musketeers.”[1][2][3] 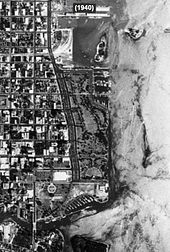 The park began construction in 1924 under the design plans of Warren Henry Manning and officially opened in March 1925.[4] Beginning in 1980, it underwent a major redesign by Japanese-American modernist artist and landscape architect, Isamu Noguchi. Today, Bayfront Park is maintained by the Bayfront Park Management Trust, a limited agency of the city of Miami, Florida.

Seven blocks north is Bayfront Park's partner park, the 30-acre (0.12 km2) Bicentennial Park. This park’s name has been changed to Museum Park and it is home to The Perez Art Museum and the Frost Science Museum.

In June 2020, the park's Ponce de Leon and Christopher Columbus statues were vandalized, though it was announced that they would not be removed.[5]

Site of assassination of Anton Cermak

On February 15, 1933, Chicago Mayor Anton Cermak was shot three times in the chest and mortally wounded while shaking hands with President-elect Franklin D. Roosevelt in front of Bayfront Park by assassin Giuseppe Zangara. Along with Cermak, who died of his wounds 19 days later, four other people were hit by the gunman, one of whom also died.[6] A serious debate has ensued as to whether Zangara had been actually trying to assassinate Cermak, presumed to have been killed by accident, instead of Roosevelt, however no firm evidence has been found out to prove this theory.

A bronze statue of Christopher Columbus was placed in the park in 1952, donated by the city's Italian-American community.[1] The statue itself was sculpted by Count Vittorio di Colbertaldo of Verona, one of Benito Mussolini’s hand picked ceremonial bodyguards known as the “Black Musketeers.”[1][2][3] Colbertaldo doubled as the Musketeers's sculptor, producing statutes which commemorated the organization.[7] A second Columbus statue done by Colbertaldo is in Pioneer Park in San Francisco. On June 10, 2020 the Columbus statue at Bayfront Park was spray-painted with red paint, symbolizing spilt blood, as an act of protest against the continued glorification of a man responsible for ushering in an era of exploitation and slaughter of Indigenous peoples by European colonizers.[8] The action was carried out by individuals protesting the murder of George Floyd and police brutality.[8]

Bayfront Park holds the city's annual "America's Birthday Bash" on Independence Day, which attracted over 60,000 visitors in 2011. The park also hosts the city's official New Year's Eve party that annually hosts over 70,000 visitors. Visitors are encouraged to take public transport for events at Bayfront Park as parking can be scarce and expensive. The nearest Metrorail station is Government Center. From there a connection to the Metromover is available with three stops near the park, Bayfront Park, First Street, and College/Bayside.[9]

It has been the site of the Ultra Music Festival, an electronic dance music event. In 2018, Miami's commissioners barred the festival from being held downtown, citing complaints surrounding noise and the behavior of attendees, resulting in a relocation to Virginia Key.[10] The festival will return to the park in March 2022.[11] 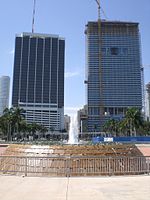 The large fountain on Biscayne Bay is a landmark in the park.

A series of motorsports events have taken place on a temporary street circuit at Bayfront Park dating back to 1983.