Circuit de Nevers Magny-Cours is a motor racing circuit located in central France, near the towns of Magny-Cours and Nevers, some 250 km (160 miles) from Paris and 240 km (150 miles) from Lyon.[1]

A campus of the French engineering college Institut supérieur de l'automobile et des transports is also located on the circuit, as well as the museum Conservatoire de la monoplace française. 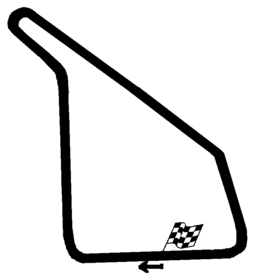 The original circuit layout (1961-1970), on these times the circuit was called as 'Jean Behra Circuit'.

Commonly dubbed Magny-Cours, it was built in 1960 by and was home to the prestigious Winfield racing school (École de Pilotage Winfield), which produced drivers such as François Cevert, Jacques Laffite and Didier Pironi. However, in the 1980s the track fell into disrepair and was not used for international motor racing until it was purchased by the Departemental Conseil de la Nièvre.

In the 1990s, the Ligier Formula One team and its successor Prost were based at the circuit and did much of their testing at Magny-Cours.[citation needed]

The circuit was re-designed in 2003 and used for a wide range of events include various sports and commercial use.[2] For the 2003 French Grand Prix, the final corner and chicane were changed in an effort to increase overtaking, with little effect.[citation needed]

In 2006, Michael Schumacher became the first driver ever to win any single Formula One Grand Prix a total of 8 times and at the same circuit.[citation needed]

Bernie Ecclestone originally confirmed that F1 would not return to Magny-Cours in 2008, instead moving to an alternative location possibly in Paris. However in a striking U-turn, it was revealed that the 2008 French Grand Prix would take place at Magny-Cours with the release of the official calendar in July 2007.[3]

In June 2008, the provisional calendar for the 2009 season was released, and a French Grand Prix at Magny-Cours appeared on it, scheduled for 28 June. However, in October 2008 the 2009 French Grand Prix was cancelled after the French Motorsports Federation (FFSA) withdrew financing for the event. In 2009 the track hosted its first Superleague Formula event. It also hosted a second event in 2010.[6]

The circuit was used as part of stage three of the 2014 Paris–Nice cycling race,[7] with the peloton completing almost a full lap of the circuit – in the reverse direction to its motorsport use – before the finish on the front straight. 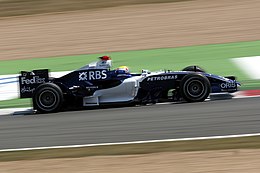 The circuit features several high-speed chicanes with prominent kerbs, such as the Imola chicane. (Mark Webber pictured driving for Williams).

The track nowadays is a smooth circuit with good facilities for the teams, although restricted access prevents spectators from reaching many parts of the circuit. Unusually, many corners are modelled on famous turns from other circuits, and are named after those circuits, i.e.. the fast Estoril corner (turn 3), the Adelaide hairpin (turn 5) and the Nürburgring and Imola chicanes (turns 7 and 12 respectively). It has a mix of slow hairpins and high-speed chicane sections which includes a long fast straight into the first-gear Adelaide hairpin, the best overtaking opportunity on the circuit.[8] The circuit is very flat with negligible change in elevation (only a small valley at the Estoril corner and a slight hill near the Lycee corner).[citation needed]

The circuit provides few overtaking opportunities, despite modifications in 2003, which means the races here are commonly regarded as quite uneventful.[9] Formula 1 races at Magny-Cours tend to have a processional nature, with most overtaking occurring during pit stop sequences.[citation needed]

More varied racing occurs when it rains, such as in the 1999 race, which was interrupted by a downpour. After a restart, most top contenders developed problems, which paved the way for Heinz-Harald Frentzen to claim a surprising victory in his Jordan.

Although the Bol d'Or 24-hour motorcycle endurance race was held at Magny Cours for several years, it returned to the more popular Bugatti circuit at Le Mans in 2015.

The official race lap records at the Circuit de Nevers Magny-Cours are listed as:

The Nevers area has an oceanic climate that is still influenced by its far inland position. With a yearly precipitation of over 800 millimetres (31 in) on average, Magny-Cours is theoretically prone to rain affecting proceedings, although in the Formula One era, it often evaded the rainfall. There was one notable exception, when both the qualifying and the race of 1999 saw a fully wet track. With the Grand Prix being held in the middle of summer, tyre wear through high asphalt temperatures was possible. Magny-Cours' main event post-Grand Prix era, Superbike World Championship is being held in autumn and as a result sees colder temperatures.