An executive car generally needs to be comfortable and well-equipped while also being cheap to run as a company car.[1] They may have performance features and are often viewed as status symbols. A high percentage of the "executive cars" market share consists of corporate-owned cars, or vehicles provided by a firm for the business and sometimes private use by employees.[2]

Cars related to the term by country

The "compact executive car" description is not often used in the United States, but it describes certain models imported from Europe.[3]

The Cadillac ATS has been described as a compact executive car.[4][5][6] The ATS was succeeded by the Cadillac CT4.

Before the ATS, a heavily badge engineered version of the Saab 9-3 was sold in Europe as the Cadillac BLS (2005–2009). The BLS was both developed and manufactured by Saab in Trollhättan, Sweden. The model was never sold in the Northern American market. Cadillac's previous attempt at a compact executive car for the US market was the Cimarron manufactured in between 1981–1988. The Cimarron is largely consider to be a market failure and also at least partially responsible for the market struggles that Cadillac faced during and after its production.[7] 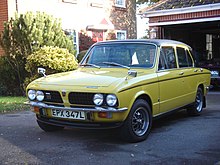 An early compact executive car produced in Germany was the 1966 BMW 02 Series, followed by the BMW 3 Series in 1975.

DS Automobiles offers a compact executive with its DS 4 hatchback. From earlier models also the larger DS 5 (sold until 2018) could be considered a compact executive car.[19] The DS brand used to be a sub-marque of Citroën, and thus earlier model years (before 2015 for the DS 4 and DS 5, but the change depends on the model) carry the Citroën logo. The smallest model offered by DS has been the DS 3 (sold until 2019), which could be condired to be a subcompact or even supermini executive car. The current DS 3 Crossback differs from the earlier model substantially, as it is a small crossover SUV.

The Volvo S60 as well as its estate version Volvo V60 are considered to be compact executive cars.[20][21]

Saab Automobile, which went defunct in 2016, had the 9-3 -model which was a compact executive car. Based on heavily modified GM engines and platforms, the 9-3 was available as a convertable, hatchback (first generation), sedan (second generation) and station wagon (second generation). The 9-3 had a wide variety of both petrol and diesel engine options. Most of the petrol engines were turbocharged and supported the use of ethanol fuel, which were both relatively uncommon features for a mass production car in the 00's. The 9-3 also had high emphasis on car safety, which was a high priority in the design of all Saab cars. Also the previous Saab 99 and Saab 900 could be considered as compact executive cars at some markets, while especially in Northern Europe these models were more commonly seen as ordinary small family cars.