In the late 1940s, the dirt-surfaced Breckenridge Oval opened on the site. In 1952, the oval was shortened and paved as a 1⁄4-mile asphalt oval, and the 8,000-seat facility was renamed Speedway Park. 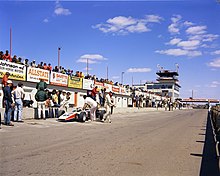 May 1970 Formula A race at the Edmonton International Speedway

Qualico Developments was the land owner in the latter years. The track closed in 1982, after the area was annexed by the City of Edmonton. Qualico then converted the land to housing. Edmonton would be without any form of professional racing until Capital City Raceway Park opened in 1991.