The Freightliner Business Class M2 is a model range of medium-duty trucks produced by Freightliner. In production since June 2002, the M2 was the successor to the FL-Series introduced in the 1990s.[2] In terms of size, the M2 is produced in Class 5 through Class 8 GVWR ratings, competing primarily against the International Durastar and the Ford F-650/F-750 Super Duty.

The Business Class M2 is produced in a wide range of configurations, in both medium-duty and severe-service configurations. There are three different cab configurations: a 106-inch BBC (bumper to back of cab) day cab, a 132-inch BBC extended cab, and a 154-inch BBC 4-door crew cab.[1] The crew-cab configuration offers seating for up to six passengers.[1] 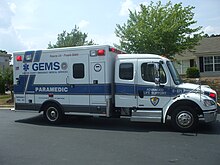 Named for its 106-inch BBC length in daycab configuration, the M2 106 is a Class 5-8 truck available in GVWRs up to 56,000 lbs.[3] The M2 106 is produced primarily as a straight truck, although its cab and chassis are used in the bus industry as a cutaway cab conversion.

Named for its 112-inch BBC length, the M2 112 is a Class 8 truck available in GVWRs up to 80,000 lbs.[4] Although available as a straight truck like the M2 106, it is also available as a tractor. Externally, it is distinguished by a larger grille and slightly higher hoodline.

The truck is currently being field-tested by customers. The first out of 10 trucks was delivered to Penske Truck Leasing Corporation in Los Angeles in December 2018.[7] 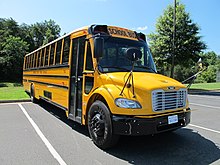 Freightliner offers two variants of the M2 for bus use: the C2/S2 cowled chassis and the S2C cutaway cab bus chassis. Serving as the donor chassis for the Thomas Saf-T-Liner C2 school bus constructed by Freightliner subsidiary Thomas Built Buses, the C2 chassis departs from previous precedent in its higher parts commonality with the M2 106 truck. Forward of the driver's seat, the dashboard is used in its entirety; while the windshield is redesigned (enlarged), the stock windshield wipers are retained.

The Freightliner S2C is the cutaway-cab variant of the M2.[9] Never produced with a school bus body, the S2C was intended for various commercial uses, including shuttle and transit bus use.[10]

As with the FL-Series, Freightliner developed severe-service variants of the Business Class M2. While the M2 106V and M2 112V would share the same cabs and hood as the medium-duty vehicles, they were based on their own unique chassis. In 2011, Freightliner replaced the M2 106V/112V with the "SD" line of severe-service trucks, dropping them out of the Business Class M2 model range. While the 108SD and 114SD still used the M2 cab, an all-new hood and chassis was used.

Freightliner Specialty Vehicles (also known as SportChassis LLC)[11] is a manufacturer based in Clinton, Oklahoma that produces conversions of the Business Class M2 as consumer vehicles.[12] Several vehicles are available, including 5th-wheel tow vehicles and pickup trucks. While similar in layout to the International CXT/RXT, these differ in that they are completed by a second-stage manufacturer.