Fundidora Park (Parque Fundidora in Spanish) is an urban park located in the Mexican city of Monterrey, built in what once where the grounds of the Fundidora Monterrey steel foundry company.

The Parque Fundidora is located inside the grounds formerly occupied by Fundidora Monterrey, a steel foundry company of great importance to the economic development of the city during the 20th century. After its bankruptcy in 1986, Federal and State government showed interest in using the land to create a public park with the aim to preserve its history as well as being a center of culture, business, entertainment and ecological awareness for the people of the city.[2] In 1988 the land was expropriated and the Fideicomiso Fundidora (Fundidora Trust) was created to manage it in an arrangement between the State government and private investment.[2] Construction began in 1989, starting with the preservation of historically important buildings and structures within the foundry and the dismantling of the others, followed by the construction of the CINTERMEX convention center, Plaza Sesamo amusement park, a hotel and a cinematheque. Construction and rehabilitation continued during the rest of the 1990´s.[2]

The park opened in February 24 of 2001 with an area of 114 hectares (280 acres), receiving the additional name of Museum of Industrial Archaeology Site. In 2010 the Paseo Santa Lucía development, consisting of a 2.35 kilometres (1.46 mi) artificial river and accompanying river-walk, is incorporated to the park bringing it into its current state, with a total area of 144 hectares (360 acres), 80 hectares (200 acres) of which are green space, 2 lakes, 23 fountains, 16 buildings, 27 large scale industrial structures and 127 pieces of steel-making machinery and tools of historical importance to the state of Nuevo Leon.[2] There's also a 3.4 kilometres (2.1 mi) long track surrounding the original section of the park.[1] 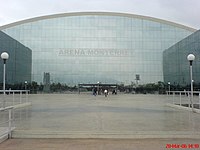 Parque Plaza Sésamo is a thematic park devoted to the Sesame Street franchisee, along with the local adaptation known as Plaza Sésamo. This park was inaugurated in 1995.

Auditorio Citibanamex (formerly named Auditorio Coca-Cola, Auditorio Fundidora and Auditorio Banamex) is an indoor amphitheatre with a capacity of 8,200.[4]
The amphitheatre opened in 1994 with a sponsorship by The Coca-Cola Company, and it was the primary venue for concerts until the Arena Monterrey opened in 2003. 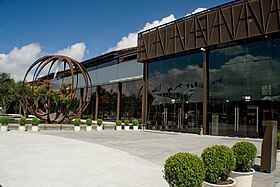 Expo Center @ the Old Lewis Building.
Host of the 2007 Universal Forum of Cultures.