He was one of four sons of Count Gaetano Marzotto. Soon after his 20th birthday, he entered his father's Lancia Aprilia in the Giro di Sicilia and finished second in class (16th overall). Marzotto met Enzo Ferrari in 1948 with the task to build a 2L Grand Touring Coupe which is believed to be the fourth customer car even built by Ferrari, a Ferrari 166 Inter. He started racing with an Aprilia for an Italian National Championship Event in 1948. Marzotto drove the Aprilia for ten races over a period of three years.[3][4][5]

In 1950, he and his three brothers, Vittorio, and all entered the 1950 Mille Miglia, driving Ferraris. Gianni started last, would score his first major success, when he piloted a Ferrari 195 S to victory. He was accompanied by Marco Crosara. This was the famous double-breasted victory, that Marzotto achieved wearing a double-breasted brown suit. He won fame not just for winning, but for his attire which seemed to catch the spirit of the Italian fans. But this might not have happened at all. Upon testing his recently purchased Ferrari prior to the race, Gianni found it nothing compared to the previous car he drove. Suspecting some type of deviousness on the part of Scuderia Ferrari, he returned to the Maranello to confront Enzo Ferrari. It was explained that Luigi Bazzi, Ferrari's technician had purposely strangled the engine in order protect the young driver. Somewhat embrassed by this, Enzo promised to personally see that car would be prepared for the race. Marzotto decided for the following season he would improve on the 195 S, with an all-new design of his own based on Ferrari 166 with an engine from a Ferrari 212. Featuring a low slung body and rounded shape, the car went well in the 1951 Mille Miglia, but retired due to problems with the rear axle.[2][3][6][7]

In 1951. Marzotto undertook a limited campaign of Formula 2 races for the family team, Scuderia Marzotto, as well as in the works Ferrari, with some success. He won the Grand Prix de Rouen-les-Essarts, and visited the podium in the Gran Premio di Roma.[8][9] 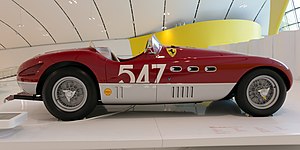 Ferrari 340 MM spider Vignale which won in the hands of Giannino Marzotto, pictured in the Enzo Ferrari Museum

Originally, Marzotto planned to race one of Alfa Romeo's new 6C 3000 CM, but upon returning from a business trip to Lebanon, he found that car had been assigned to another driver. After a call to Gianni Lancia found that the team was fully committed, Marzotto was forced to turn to Ferrari, with whom he had developed a strained relationship for a car. At Maranello, he was shown Luigi Villoresi's 340MM which a recently won the Giro di Sicilia. The car had not been touched since its last race and had suffered a loss of brakes towards the end of the event. He was left without any other option, so he decided to take the car out of storage and have it restore it to racing trim. He was not delivered to Marzotto until a few hours before the race. This meant he was unable to do any pre-race testing in it.[3][7][10]

Just past Siena, Marzotto remembered that the Ferrari mechanics did not change his engine oil at the last control point, as they were unable to open the bonnet. After making a U-turn, he raced back to Siena, where his mechanics cut a hole in the bonnet, directly over the engines oil filler cap, and topped the oil up accordingly. Meanwhile, Juan Manuel Fangio's Alfa was now leading, but surrender to the chasing Marzotto when his steering started to play up along with fading brakes. Although Marzotto suffered two minor crashes, he took it all the way to Brescia, to win his second Mille Miglia, repeating his success of 1950, again accompanied by Crosara.[2][6][7][10][11]

The following year's event, would prove to be Marzotto last international race. He was partnered by , instead of his regular co-driver Crosara in the full works Ferrari, however did not return to Brescia, as he withdrew during the event through illness.[12]

"[He was] a man with a strong personality and fascinating dialectical skills for a young man as curious as I was, with numerous very clear ideas about a great number of topics." Enzo Ferrari, to whom the Marzotto brothers represented important customers, was particularly taken by Giannino. "He was a real sport merchant, a young Varzi in his cold, calculating earnestness. The successes in the Mille Miglias were a sure sign of his dedication and enough to show that he would have made an excellent professional driver, perhaps even a champion."[5]

After retiring from Motor Racing, Marzotto joined the Factory Lane G. Marzotto & F. Spa to become a director in 1953 before being promoted to Managing Director in 1956. In 1958, he gained a further promotion to vice-president and managing director before becoming the company president in 1968. He married in 1969 and had three daughters.[7][13]

Marzotto was known to generously donate to the Fondazione Club Mille Miglia, encouraging its grants and giving of an international prize known as Courageous Intelligence.[2]

Marzotto served as President of the Mille Miglia Club between 1988 and 1990, and then again from 2011 until his death. He was also the Honorary President of the Luigi Bonfanti Automobile Museum, which dedicated a permanent section to him in its Romano d'Ezzelino site. There is also a gallery known as Galleria del Motorismo, Mobilità ed Ingegno Veneto – Giannino Marzotto and this explore the story of Marzotto's life of motor racing and shows his talent. It is entirely dedicated to his career.[2][7]