The Idemitsu Mazda MX-5 Cup presented by BF Goodrich is a single-make motor racing championship sanctioned by the International Motor Sports Association (IMSA) in the United States. Mazda MX-5 Cup is the professional Spec Miata series of Mazda Motorsports, promoted by . The pro Spec Miata series has its roots in 2003, but a unified national championship was launched in 2006.

The first generation Mazda MX-5 or Mazda Miata was launched in the U.S. market in May 1989 (model year 1990). The Sports Car Club of America placed the car in the Showroom Stock C class for production vehicles with a 1.600cc engine. The rules allowed the car to be entered in races when the model was one year old, in 1991. As production and popularity of the sports car grew, the SCCA developed a separate class for the car. After an exhibition race at Road Atlanta in 1999, an SCCA regional class was launched in 2000. In professional motorsport, the Miata's were entered in the SCCA World Challenge, but without major results.

The Mazdaspeed Miata Cup was launched for 2003 with a Pacific and an Atlantic championship. The series first race was run at on May 3rd and 4th 2003. and won the two races over the weekend.[1] Niki Coello went on to win the Atlantic Tour championship.[2] won the inaugural Pacific Tour.[3]

The introduction of the third generation Mazda MX-5 coincided with the unified national pro series in 2006.[4] The inaugural season started at Mazda Raceway Laguna Seca. A total of 22 racers started the inaugural race which was won by , from pole position.[5] The series was support event for the Rolex Sports Car Series at Laguna Seca, Lime Rock Park, Mid-Ohio and Miller Motorsports Park. The series also supported events of CASCAR, ChampCar, American Le Mans Series and the Grand Prix de Trois-Rivières.[6] Jim Daniels clinched the championship with one round remaining.[7] The 2007 season started at the Grand Prix of Houston with the series first night race.[8] won five out of eight races to clinch the championship. Saini was promoted to the 2008 SCCA World Challenge with Mazda.[9] The 2008 season started with a Mazda Miata shootout. won the race between SCCA and NASA champions to receive a fully funded drive in the 2008 regular season.[10] Rampelberg finished sixth in the season standings winning races at Portland and Miller Motorsports Park. won the championship winning two races but finishing all eight races.[11]

Todd Lamb dominated the 2009 season. Lamb won eight out of ten races, consecutive. Marc Miller and won the remaining two races. NASCAR driver Ryan Ellis also competed in the series.[12] Rampelberg continued in the series winning the 2010 series.[13] In 2010 the series had its first standing start, at New Jersey Motorsports Park, previously only using a rolling start.[14] The 2011 season was a tough season for the series. The final rounds of the series saw only 16 entrants. Michael Cooper won the series as Rampelberg moved into the Continental Tire SportsCar Challenge.

For 2012 Todd Snyder was appointed as the director of competition.[15] Snyder left the series at the end of the season to join the IMSA. The series created a partnership with the Skip Barber Racing School for young racers. was the first driver to win the class. The regular championship was won by .[16] Former single-seater racer Christian Szymczak won the 2013 series championship. , winner of the 2013 Skip Barber class, won the 2014 overall championship. This was the first back to back championship win for and team principal Ken Murillo.[17] In November 2014, Mazda unveiled the new Global MX-5 Cup at the SEMA tradeshow. The final season of the third generation car was won by with a 13 point margin on Patrick Gallagher.[18]

In 2016, the Global MX-5 Cup was launched. The series featured the new fourth generation Mazda MX-5, and a new prize package. The winner of the series was invited to test a Mazda powered Lola B08/80 prepared by Mazda Motorsports.[19] Last season's championship contenders Dean II and Gallagher again competed at the front of the pack. Gallagher won the first race after Dean II started from pole position.[20] The championship was won by 26-year old . Sparks won a $200,000 scholarship to advance his racing career.[21] The season culminated with a new invitational shootout format. The Mazda MX-5 Cup Global Invitational debuted with nineteen drivers from eight different countries. The inaugural edition was won by Sparks. Former FIA GT1 racer Gabriele Gardel also competed in the race.[22]

For 2017, sanctioning of the series was taken over from SCCA Pro Racing to IndyCar. Promotion of the series was taken over by . Andersen Promotions, headed by Dan Andersen, also promotes and runs all series of the Road to Indy (USF2000, Pro Mazda Championship and Indy Lights). The Global MX-5 Series joined the IndyCar Series at the Grand Prix of Alabama, Kohler Grand Prix, Honda Indy Toronto and the Grand Prix at The Glen.[23]

Beginning in 2021, the series partnered with IMSA under a new sanctioning agreement. The series currently races at select WeatherTech SportsCar Championship events, while retaining a single IndyCar event (the Grand Prix of St. Petersburg). In 2022, the series will continue it's annual visit to Road America, but will be part of the NASCAR Cup Series race weekend. 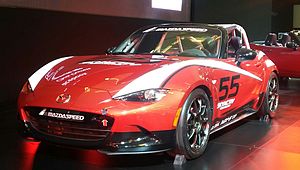 For the 2016 season, Mazda introduced the fourth generation Mazda MX-5. The car is built at the Hiroshima Mazda factory before being transformed into a MX-5 Cup car. The MX-5 Cup version was developed by Mazda North American Operations and . The engine is a 2.0 L SkyActiv-G (PE-VPS) I4. From 2016-2018, the series began with the ND1 iteration of the car, before introducing an updated ND2 class in 2019. For the 2019 season, the series utilized a two-class structure, with a premier ND2 class running alongside the legacy ND1 cars. The ND1 ECU was provided by , while the ND2 upgraded to a Bosch ECU with an increased 7,500rpm limit .[27] The ND2 upgrades also included an increase to 181 horsepower and a sequential gearbox. Tom Long was the test driver during the development phases.[28] In 2019, Long Road Racing ceased operations, with responsibilities transferred to Flis Performance.