Hino Motors, Ltd. (日野自動車株式会社, Hino Jidōsha), commonly known as simply Hino, is a Japanese manufacturer of commercial vehicles and diesel engines (including those for trucks, buses and other vehicles) headquartered in Hino, Tokyo. The company is a leading producer of medium and heavy-duty diesel trucks in Asia.[4]

Hino Motors is a large constituent of the Nikkei 225 on the Tokyo Stock Exchange. It is a subsidiary of Toyota Motor Corporation and one of 16 major companies of the Toyota Group.

The following year (1942), the new entity of Hino Heavy Industry Co., Ltd. spun itself out from Diesel Motor Industry Co., Ltd., and the Hino name was born. During World War II, Hino manufactured Type 1 Ho-Ha half-track and Type 1 Ho-Ki armored personnel carrier for the Imperial Japanese Army. Following the end of World War II, the company had to stop producing large diesel engines for marine applications, and with the signing of the treaty, the company dropped the "Heavy" from its name and formally concentrated on the heavy-duty trailer-trucks, buses and diesel engines markets, as Hino Industry Co., Ltd. The company took its name from the location of its headquarters in Hino city (日野市, Hino-shi) within Tokyo prefecture.

To sharpen its marketing focus to customers, in 1948, the company added the name "Diesel" to become Hino Diesel Industry Co., Ltd. In 1950 the heavy-duty TH10 was introduced, equipped with the all-new 7-liter DS10 diesel engine. An eight-tonner, this was considerably larger than existing Japanese trucks which had rarely been built for more than 6,000 kg (13,230 lb) payload.[5]

In 1953, Hino entered the private car market, by manufacturing Renaults under licence, and in 1961 it started building its own Contessa 900 sedan with an 893cc rear-mounted engine, and a pickup truck called the Hino Briska with the Contessa engine slightly enlarged and installed in the front with rear wheel drive. The Italian stylist Giovanni Michelotti redesigned the Contessa line in 1964 with a 1300 cc rear-mounted engine. Fed by two SU type carburettors, this developed 60 hp (44 kW) in the sedan and 70 hp (51 kW) in the coupé version. However, Hino ceased private car production very quickly in 1967 after joining the Toyota group. In 1963, the Hamura factory began operations, and focused entirely on commercial truck and bus manufacture.

Hino Trucks have also been assembled in Portugal and in Canada.[6]

In 2018, Hino and Volkswagen Truck and Bus (later renamed Traton) announced a wide-ranging strategic partnership for activities including procurement, technologies and logistics. In November 2019, they established a procurement joint venture called Hino and Traton Global Procurement, with 51% of it owned by Traton and 49% by Hino.[7]

Hino has been marketing trucks in Canada since the 1970s.[8] Hino Motors Canada Ltd., is the exclusive distributor of Hino products in Canada, and is part of the Toyota Group of Companies, with head office and Parts Distribution Centre in Mississauga, Ontario. In May 2006, Hino opened a new 12,300 m2 (132,000 sq ft) assembly plant in Woodstock, Ontario, employing at first 45 (grown since to more than 70) and with an annual capacity of 2,400 trucks.[8] It began assembly of Class 4 and 5 trucks in 2006 and continued to do so until 2010. Since then, it has been building only Class 6 and 7 trucks.[citation needed]

Hino Motors Manufacturing Colombia (HMMC) is a partnership between the Mitsui group and the Colombia manager for the Hino brand, PRACO-Didacol S.A. The partnership assembles medium and heavy trucks, destined mainly to the export market for the Andinean and Central American countries. The factory was opened on 9 October 2007 in Cota, a municipality near the capital city of Bogotá.[9][10] From this facility, the FCJ and Hino Dutro (300, 500 and 900 series) trucks are assembled.[11] The Mitsui-Keiretsu is the principal shareholder and owner of this factory. The plant produced the 1000th unit in July 2009.[12] The 20,000th truck was finished on 14 May 2014.[13]

[14] is strategic production base for ASEAN region. HMMI is in partnership between the Hino Motors, Ltd and PT. Indomobil Sukses Internasional, Tbk. The partnership assembles medium, heavy duty trucks, mainly or ASEAN market. The factory was opened on April 2003, evolving from PT. Hino Indonesia Manufacturing which was opened on October 1982. The factory is located on Purwakarta, West Java. Its sister company [15] is formed April 2003. Currently there are 41 dealerships and more than 100 branches, around the archipelago.[16]

Hino Trucks have been assembled in The Republic of Ireland since 1968 by J Harris on the Naas/Nangor Roads, Dublin.[17]

Hino Motors signed a 10-year assembly agreement with Kaiser-Illin Industries of Haifa, Israel, in 1963. Assembly of the Contessa 900 started in 1964. Later, Briska 900 and 1300 and the Contessa 1300 sedan were assembled in Haifa as well. During the years 1964–1965, Israel was Hino's second most important market for its Contessas. Israel exports amounted to ~10% of total Contessa production. After it was purchased by Toyota, the contract was terminated and the very last Israeli Contessas rolled off the assembly line in March 1968. In total, over 8,000 Hino Contessa and Briska were assembled in Israel.

In mid 2008, Hino Motors was said to be building a new truck assembly facility in Guanajuato, Mexico, serving international deliveries. The facility was reportedly built in an 80:20 partnership with Japanese trading firm Mitsui, opening in 2009 and with a production capacity for 1,200 of the Hino 500 series trucks per year.[18]

In 1975, Hino has entered the Philippine market, and creating Pilipinas Hino, Inc. It was originally to manufacture buses, and later trucks. Previously that in the 1970s, Hino had initially shipped vehicles to the country from Japan, before the creation of PHI.

In 2015, Pilipinas Hino, Inc. announced name its change to .

In 2017, Hino Motors announced that it was going to open its first factory in Russia. The factory will begin producing trucks in 2019 and will have the capacity to produce 3,000 yearly.[20]

In the United States, Hino has operated since 1995.[22] Hino Motors Manufacturing U.S.A., Inc. assembles medium-duty trucks at its Williamstown, West Virginia, plant. They opened a second plant in Mineral Wells, West Virginia in late 2018. Its manufacturing facilities in Ontario, California, and Marion, Arkansas, produce axles, knuckles, and suspension components for Toyota's Tacoma, Tundra, and Sequoia models. Hino's Parts Distribution Center in Mira Loma, California, supplies Latin American and Caribbean distributors with genuine Hino service parts. The 18,000 m2 (194,000 sq ft) assembly plant in Williamstown, West Virginia, assembles Class 6-7 Hino trucks at an annual capacity of 10,000 units.[citation needed] The plant was opened in November 2007 and employs about 200. The plant in Long Beach, California, where Hino's US-based medium duty truck production had begun in 2004,[22] was closed in 2007 and its production was transferred to the West Virginia facility.[citation needed] Production in West Virginia began with Class 4-7 trucks but the Class 4-5 products were dropped after 2010 model year and the plant now focuses on Class 6-7 products. Opened in 2016, Hino operates a distribution center in Gahanna Ohio. 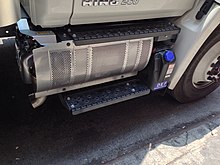 Hino truck and its selective catalytic reduction (SCR) next to the DPF with regeneration process by the late fuel injection to control exhaust temperature to burn off soot.[23][24]

The first generation Ranger KL spawned into KM, KR, and other variants. In Australia.

Hino also sold the European truck Scania R 420 in Japan, in an agreement with the Swedish brand which was discontinued in 2011.

One small model for military and workers transportation (name of the model still unknown).

Others small trucks for food transportation.

"Team Samurai" entered a Contessa in the Trans Am Series in 1966 at the race at Riverside International Raceway. After being retired due to a collision, the team withdrew from the series.

Hino has competed in the Dakar Rally since 1991 with a Ranger FT 4WD truck driven by the Japanese rally driver, Yoshimasa Sugawara. Hino has always finished in the Top 10 in the Camion Category, and 1-2-3 overall in the 1997 event.