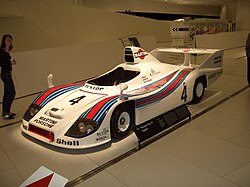 Hurley Haywood (born May 4, 1948) is an American race-car driver. Hurley has won multiple events, including five overall victories at the Rolex 24 at Daytona, three at the 24 Hours of Le Mans, and two at the 12 Hours of Sebring. He is credited with the 1988 Trans-Am title, two IMSA GT Championship titles and 23 wins, three Norelco Cup championships, a SuperCar title and 18 IndyCar starts.

After Peter H. Gregg's death, Haywood was a spokesperson and executive with Brumos Automotive dealerships.[5]

He is the chief driving instructor at the Porsche Track Experience, held at the Barber Motorsports Park outside Birmingham, Alabama.[1] Patrick Dempsey produced a documentary film, Hurley, about Haywood's life.[6]

In honour of his historical achievements, he was invited to perform the ceremonial duties of Grand Marshal at the 2019 24 Hours of Le Mans.[7]

In February 2018, Haywood publicly came out as gay in his autobiography Hurley: From The Beginning.[8]

In June 2019, to mark the 50th anniversary of the Stonewall riots, an event widely considered a watershed moment in the modern LGBTQ rights movement, Queerty named him one of the Pride50 "trailblazing individuals who actively ensure society remains moving towards equality, acceptance and dignity for all queer people".[9]

He was inducted into the Motorsports Hall of Fame of America in 2005.[10]