John Rhodes Cobb (2 December 1899 – 29 September 1952) was an early to mid 20th Century English racing motorist. He was three times holder of the World Land Speed Record, in 1938, 1939 and 1947, set at Bonneville Speedway in Utah, US. He was awarded the Segrave Trophy in 1947. He was killed in 1952 whilst piloting a jet powered speedboat attempting to break the World Water Speed Record on Loch Ness water in Scotland.

Cobb was born in the village of Esher, in the county of Surrey, on 2 December 1899, near the Brooklands motor racing track which he frequented as a boy. He was the son of Florence and Rhodes Cobb, a wealthy furs broker in the City of London. He received his formal education at Eton College and Trinity Hall, Cambridge, before joining his father's firm and pursuing a successful career as the managing director of a number companies in the trade, the personal financial resources from which he used to fund a passion for large capacimotor high speed racing. In 1924 he acquired a Royal Aero Club aviator's certificate, qualifying as a pilot on a Sopwith Grasshopper.[1]

In 1928 he privately purchased a 10.5-litre Delage which was imported to England from the factory in Paris, which he raced at Brooklands from 1929 to 1933, breaking the flying start outer lap Record three times in these years, and being clocked at a top speed of 138.88 miles per hour on 2 July 1932. In 1932 he also won the British Empire Trophy at Brooklands.[2]

In 1933 he privately commissioned the design and construction of the 24-litre "Napier Railton" from "Thomson & Taylor", with which he broke a number of track speed records, including setting the ultimate lap record at the Brooklands race track which was never surpassed, driving at an average speed of 143.44 mph (230.84 km/h) achieved on 7 October 1935, having earlier overtaken the 1931 record set by Sir Henry "Tim" Birkin driving Bentley Blower No.1, and regaining it from his friend Oliver Bertram.

The Railton Special and John Cobb in the cockpit

Driving the piston-engined, wheel-driven Railton Special, he broke the World Land Speed Record at Bonneville salt flats on 15 September 1938 by achieving 350 miles per hour. He broke it a second time at the same site on 23 August 1939, achieving 369 miles per hour.[3]

During World War 2 he served as a pilot in the Royal Air Force, and between 1943 and 1945 served with the Air Transport Auxiliary, being demobilised with the rank of Group Captain. He made an (uncredited) appearance in the wartime propaganda film Target for Tonight (1941).[4]

Cobb returned to Bonneville salt flats again in 1947, where on 16 September he beat his own standing 1939 World Land Speed Record by reaching 394.19 mph (on one of the two runs he was clocked at having reached 403 mph),[5] earning him the press moniker "The Fastest Man Alive".[6] This record remained in place until 1963, when it was surpassed by the American Craig Breedlove.

Start of John Cobb's measured mile where he lost his life

After the 1947 achievement, Cobb turned his mind to becoming on water what he now was on land, and went after the simultaneous World Water Speed Record. He commissioned from Vospers the jet-engine powered speedboat Crusader, and selected the long water loch of Loch Ness in Scotland for the speed trial. On 29 September 1952 he was killed at the age of 52 whilst attempting to break the world Water Speed Record at Loch Ness whilst piloting Crusader at a speed in excess of 200 mph (320 km/h). During the run the boat hit an unexplained wake in the water and disintegrated about Cobb.[7] His body, which had been thrown 50 yards beyond the wreckage, was recovered from the loch, and subsequently conveyed back to his home county of Surrey, where it was buried in the graveyard of Christ Church, Esher.[8] A memorial was subsequently erected on the Loch Ness shore to his memory by the townsfolk of Glenurquhart.

In 2002 the remains of the jet engine speedboat Crusader were located on the bed of Loch Ness at a depth of 200 metres and the site was designated as a scheduled monument in 2005.[9] The wreck was filmed by a research team from National Geographic in 2019.[10] 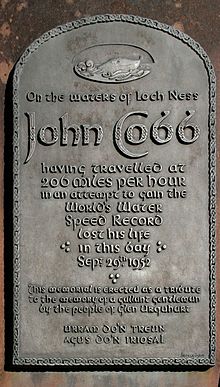 The memorial to John Cobb

Cobb resided at 'Grove House' in Esher, an 18th century mansion, which was demolished in the late 20th century for building development. A public green in Esher (located at 51.37933 -0.36472) was named 'Cobb Green' in tribute to his achievements. In 2013 an archaeological excavation of meadowland at Arran Way at Esher's Lower Green uncovered the foundations of Grove House.[13][14] In 2017 a Blue plaque was unveiled by Richard Noble to Cobb's memory at the newly re-built Cranmere Primary School which partially occupies the site of the former Grove House estate.[15]