For other uses, see Kamaz (disambiguation).

JSC KAMAZ (Russian: Камский Автомобильный Завод – КАМАЗ, romanized: Kamskiy Avtomobilny Zavod, lit. 'Kama Automobile Plant') is a Russian brand of trucks and engines manufacturer located in Naberezhnye Chelny, Tatarstan. It is famous for its cab over trucks. KAMAZ is a portmanteau which stands for a factory on the Kama River.

KAMAZ was founded in 1969. Today, heavy duty models are exported to many areas of the world including the Commonwealth of Independent States (CIS), Latin America, the Middle East, and Africa. KAMAZ is the largest truck producer in Russia and the CIS with its factory producing 43,000 trucks a year (2014).[3]

KAMAZ trucks have won the Dakar Rally a record seventeen times, the most in the truck category by any manufacturer. 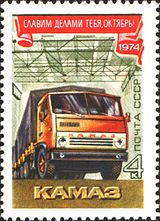 In 1969, the Resolution of the Central Committee of the Communist Party of the Soviet Union and the USSR Council of Ministers was approved which envisaged construction of a complex of heavy duty truck production plants. Around 70 potential sites to locate the facilities were investigated. Choice went in favor of Naberezhnye Chelny, then a small town on the Kama River. Naberezhnye Chelny was located in the center of the former Soviet Union. The navigable rivers – the Kama River and the Volga River – as well as proximity of the railway line, were central to meeting the logistical needs of the construction site for materials and equipment. Going forward, the location would also allow for the easy shipping of ready-made trucks to customers. The fact that the huge construction company “KamGESenergostroy” existed in the region allowed construction of plant buildings and apartment blocks for prospective KAMAZ employees to be completed.

Workers and engineers, representing more than 70 ethnicities, converged on Naberezhnye Chelny to fuse into a “melting pot” of the construction project personnel. Orders placed by KAMAZ to procure construction materials and equipment were filled by all the ministries and departments, a total of over 2,000 enterprises. Over 100,000 personnel were employed at the construction site itself. The would-be truck plant was being provided with the most state-of-the-art manufacturing equipment by the contemporary standards. More than 700 international firms were among equipment vendors for KAMAZ facilities, including such globally known corporations as Swindell-Dressler, Holcroft, CE-Cast, Ingersoll Rand, Ex-Cello (U.S.A.), Hueller-Hille, Liebherr (West Germany), Morando, Fiat (Italy), Renault (France), Sandvik (Sweden), Komatsu and Hitachi (Japan).

On December 13, 1969, ground was broken and the first bucket of soil was excavated at the construction site of the Kama River Truck Plant which was rated for production of 150,000 heavy duty trucks and 250,000 engines per year.[citation needed] The Complex of Plants on the Kama River sprawled over a vast territory measuring 57 square km. Concurrent to construction of the truck plant, huge social challenges were tackled. Hundreds of thousands of people were provided by KAMAZ with comfortable housing, modern educational facilities, kindergartens and creches, hospitals and clinics, numerous cultural, sporting, recreational and leisure centers. KAMAZ was instrumental in transforming the Kama River Area into a powerful industrial and scientific research hub and developing the infrastructure for the suburban agricultural zone.

Every year the population of the city grew by another 30-40 thousand or so. Whereas before construction of KAMAZ got underway, 27,000 residents had lived in Naberezhnye Chelny, the current population has now reached more than half a million.

The main shareholders of Kamaz are the state corporation Rostec (49.9%), Avtoinvest Limited (23.54%), a Cyprus-registered company whose main beneficiaries have never been officially disclosed, and Daimler (15%).[2] After the Panama Papers leak it was alleged that this Cyprus-based company can be traced to Sergei Roldugin, a concert cellist and personal friend of Vladimir Putin.[4]

At the same time, a 4% stake in the company is publicly traded on the Moscow Exchange,[5] leading the company to have many minority shareholders (more than 76,000 individuals in 2007).[6]

In early March, 2008 the Board of Directors of KAMAZ was elected, which included 15 people, including:[7]

The mayor of the city of Naberezhnye Chelny (April 2010 - Prime Minister of Tatarstan) - , head of the management Federal Agency for State Property Management (Rosimushchestvo) - , and the Director-General of the "Russian Technologies State Corporation" Sergey Chemezov.

KAMAZ Publicly Traded Company has more than 110 subsidiaries and affiliates, it owns shares in the authorized capital of more than 50 different companies and businesses. Together they form KAMAZ Group.
The group includes:

The main production facilities of the plant are located in the industrial area of Naberezhnye Chelny. Nefaz buses are produced in Neftekamsk (Bashkortostan).

The Kamaz trucks as well as assembled in Azerbaijan by Ganja Auto Plant since 2015.