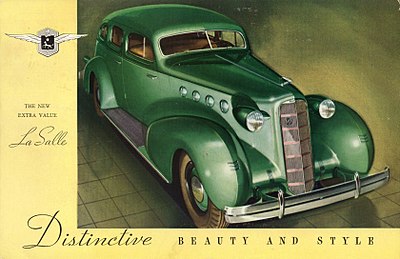 Like Cadillac - named after Antoine de la Mothe Cadillac- the LaSalle brand name was based on that of another French explorer, René-Robert Cavelier, Sieur de La Salle.[citation needed]

The LaSalle had its beginnings when General Motors' CEO, Alfred P. Sloan, noticed that his carefully crafted market segmentation program was beginning to develop price gaps in which General Motors had no products to sell.[citation needed] In an era where automotive brands were somewhat restricted to building a specific car per model year, Sloan surmised that the best way to bridge the gaps was to develop "companion" marques that could be sold through the current sales network.[citation needed]

As originally developed by Sloan, General Motors' market segmentation strategy placed each of the company's individual automobile marques into specific price ranges, called the General Motors Companion Make Program. The Chevrolet was designated as the entry level product. Next, (in ascending order), came the Pontiac, Oakland, Oldsmobile, Viking, Marquette, Buick, LaSalle, and Cadillac. By the 1920s, certain General Motors products began to shift out of the plan as the products improved and engine advances were made.[citation needed]

1927 dealer showroom poster promoting the new LaSalle. GM used a European theme in its ads that year in an attempt to build the image that the LaSalle was a worldly vehicle, fashionable in all settings and places.

What emerged as the LaSalle in 1927 was introduced on the GM C platform with Cadillac. The 1927 LaSalle was designed by Harley Earl, who had a 30-year career at General Motors, eventually gaining control of all design and styling at General Motors.

Prior to the 1927 LaSalle, automobile design essentially followed a set pattern, with design changes driven principally by engineering needs. For example, the Ford Model T evolved only slightly over its production run; A 1927 Model T was almost identical to a 1910 Model T.[citation needed]

Earl, who had been hired by Cadillac's General Manager, Lawrence P. Fisher, conceived the LaSalle not as a junior Cadillac, but as something more agile and stylish. Influenced by the rakish Hispano-Suiza roadsters of the time, Earl's LaSalle emerged as a smaller, yet elegant counterpoint to Cadillac's larger cars, unlike anything else built by an American automotive manufacturer.[citation needed]

Built by Cadillac to its high standards, the LaSalle soon emerged as a trend-setting automobile. Earl was then placed in charge of overseeing the design of all of General Motors' vehicles.[citation needed]

The LaSalle was offered in a full range of body styles, including Fisher and Fleetwood Metal Body-built custom designs. The open cars could also be ordered in tri-tone color combinations, at a time when dark colors like black and navy blue were still the most familiar colors produced by manufacturers. Earl's design even included a nod to the inspirational Hispano-Suiza, with the marque's circled trademark "LaS" cast into the horizontal tie bar between the front lights.[citation needed]ri

Wheelbases ranged between 128 in (3,251 mm) and 134 in (3,404 mm). The LaSalles of this era were equipped with Cadillac's "Ninety Degree V-8", making the car fast, while its smaller size made it sportier and more agile.[citation needed]

On June 20, 1927, a LaSalle driven by Willard Rader, along with Gus Bell, on the track at the Milford Proving Grounds, achieved 952 miles (1,532 km), averaging 95.2 mph (153.2 km/h), with only seven minutes given over to refueling and tire changes. In comparison, the average speed at that year's Indianapolis 500 was 97.5 mph (156.9 km/h). The test at Milford would have continued; however, a problem in the oil system drew the test to an early close, approaching the 9:45 mark.[citation needed]

Later, the Great Depression, combined with LaSalle's stalling sales' numbers, caused Cadillac to rethink its companion make. Both Buick and Oldsmobile had eliminated the Marquette and the Viking in 1930, their second model year. Cadillac also saw sales of its cars losing ground, as confirmed Cadillac buyers tried to trim pennies by buying the less expensive LaSalle. LaSalle sales also were falling, from a high of 22,691 models in 1929 to a low of 3,290 in 1932.[citation needed]

Beginning with the 1934 model year, a significant portion of the LaSalle was more closely related to the Oldsmobile, than to senior Cadillacs. This was marked by a shift to the Oldsmobile and Buick-based B platform. Again, Earl's work with the LaSalle resulted in a graceful vehicle, led by an elegant and thin radiator grille. Earl's other contribution was the modern, airplane-styled, semi-shielded portholes along the side of the hood. All bodies were now made by Fleetwood.[2]

Meanwhile, the Packard One-Twenty had been introduced in 1935 and was very successful. The LaSalle had additional competition from the Lincoln-Zephyr, introduced in 1936. For 1937, Cadillac made the LaSalle its own again, giving it the 322 cu in (5.3 L) monobloc V8 of the Series 60, new styling, a lower price range, and a heavy promotion, emphasizing the car was completely Cadillac built. It was too late. Model year sales of 32,000 LaSalles was a great improvement, but it remained far behind the Packard.[2] 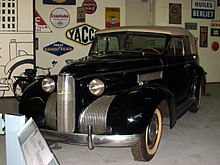 In its final years, the LaSalle once again became more Cadillac-like in its appearance and details. The narrow radiator grille opening was retained and was flanked by additional side grille work. Headlights, which had moved down and been secured to the body between the grille and the fender, were again attached to the radiator shell. LaSalle also added a sunroof, marketed as the "Sunshine Turret Top". Sales climbed up from 15,501 in 1938 to 23,028 in 1939.[2]

The final 1940 LaSalles were introduced in October 1939 with, as it had in its first year, a full array of semi-custom body styles, including a convertible sedan. Earl oversaw this redesign. The LaSalle emerged with a smooth-flowing design, its thin radiator flanked by a series of thin chrome slots.[citation needed] In its final year, sales of the LaSalle reached the second highest level ever at 24,133.[2] In addition to the Series 50, there was also the lower, wider Special Series 52 using General Motors' new "Torpedo"-style body.

LaSalle sales had consistently exceeded Cadillac's since 1933, but since its introduction in 1935 the medium priced Packard One-Twenty had consistently outsold the LaSalle by an average of 72 percent over the six-year period 1935-40 inclusively. It was decided to fold the LaSalle into the more prestigious Cadillac marque.[3] LaSalle did not have the time to develop a prestigious name before the onset of the Great Depression and did not have the opportunity afterward.[2]

In his 2013 article, "GM's Road Not Taken", Robert Cumberford reviewed the restoration of GM's 1955 Motorama La Salle II Roadster.[4] Cumberford likened the Roadster to a harbinger of GM's future. While the Roadster concept showcased important new technology – including an aluminum block, double overhead cam, fuel-injected V6 – the technology went unrealized. GM instead emphasized styling over engineering advancement for decades that followed and did not bring "an aluminum block, fuel-injected, overhead-cam V-6 into production until 2004".[5]

Cumberford described the Roadster as "a signpost to the many wrong turns that led to the bankruptcy of what was in 1955 the largest business entity in the entire world (GM)".[5]

There was nostalgia for the LaSalle name, and at various points in the 1950s, 1960s and 1970s, General Motors issued Motorama cars and proposed new consumer automobiles under the name. The year 1955 saw two Motorama concept cars, the LaSalle II four-door hardtop and the LaSalle II Roadster. Ordered to be destroyed, both the four-door hardtop and the roadster were shipped to the Warhoops Salvage Yard in Sterling Heights, Michigan; instead of being destroyed they were hidden in a corner of the facility.[4]

In 1990, collector Joe Bortz purchased and restored the Roadster, which was featured in a 2013 article in Automobile (magazine), for which the author, Robert Cumberford won the 2013 Best Article of the Year Award from the Motor Press Guild for his Automobile magazine article, "GM's Road Not Taken" about the La Salle II Roadster.[6]

When Cadillac was developing a new small luxury sedan, the LaSalle name was raised, but was passed over in favor of Cadillac Seville.[citation needed] Early mockups of what was to become the 1963 Buick Riviera were badged "LaSalle II," as the Cadillac division was being considered for production of this successful personal luxury car.

In the 1970s television show All In The Family, Archie and Edith Bunker sing, "Gee, our old LaSalle ran great" in the program's opening theme song, "Those Were the Days".

7. Those Were The Days theme song of tv show All in The Family Lyrics include “gee our old LaSalle ran great.”