Since 1981[10] the Massachusetts-based Lenco Industries, known as Lenco Armored Vehicles, has designed and manufactured armored vehicles for law enforcement, military, government and private security forces.[11] Lenco has produced more than 5,000 armored vehicles for use in more than 40 countries worldwide.[4][12]

The BearCat is one type of vehicle produced by the company that is in use by numerous U.S. military and law enforcement agencies and it also used by all state and territory Police Tactical Groups in Australia purchased by the Australian Government.[7][13] The name BearCat stands for Ballistic Engineered Armored Response Counter Attack Truck as it is the smaller cousin to the Lenco B.E.A.R.[12] The Bearcat is based on a Ford F-550 Super Duty commercial truck chassis with two available engines (the V10 Triton Gasoline and the 6.7L Turbo Diesel), and a six-speed automatic transmission.[14] The .5-1.5 inch thick mil spec steel armored bodywork is completed with .50 BMG rated[15] ballistic glass capable of multi-hits, blast-resistant floors, gunports, roof hatches/turret and agency specific equipment and/or modifications such as lights/sirens/battering ram/winches/thermal cameras and spot lights.[16]

The first BearCat was designed and completed in August 2001 as a spin-off product of the larger Lenco B.E.A.R., with input from Los Angeles County Sheriff's Department Special Enforcement Bureau (SEB) as an updated and improved version of their military surplus Cadillac Gage Ranger "PeaceKeeper" armored vehicles.[4]

BearCats are typically referred to by law enforcement agencies as being "armored rescue vehicles"[17] with their primary use being to transport tactical (SWAT/Special Reaction Teams) officers to and from hostile situations and to assist with the recovery and protection of civilians in harm's way during terrorist threats, hostage incidents, or encounters with large gatherings of aggressors.[18][19] The BearCat is designed to provide protection from a variety of small arms, explosives and IED threats.[18] Like its larger cousin, the B.E.A.R, the BearCat is able to be fitted with the "MARS" Mobile Adjustable Ramp System which allows tactical officers to gain entry to elevated platforms such as second story windows or aircraft.[20][21]

Lenco BearCats have been credited with saving the lives of officers in armed confrontations on numerous occasions. In 2010 in Athens, Texas, an armed offender fired more than 35 rounds from a semi-automatic AK-74 rifle at tactical police. Not one round penetrated the BearCat.[22] In June 2012 a BearCat, belonging to the Central Bucks Emergency Response Team, took 28 rounds from a "high-powered rifle" during a siege with no rounds penetrating the vehicle.[23] In November 2015, a BearCat was used by police to rescue civilians during the Colorado Springs Planned Parenthood shooting.[24] The Oklahoma County Sheriff's Office BearCat was shot between four and seven times with a rifle during an incident on December 29, 2015. Sheriff Whetsel was quoted as saying the BearCat saved the Deputies' lives.[25] On June 12, 2016, a BearCat was used to breach Pulse nightclub after a gunman shot and killed 49 clubgoers and injured 53 others.

At present there are nine variants of the BearCat, some with unique features and others designed for specific purposes or customers.[12][26]

The BearCat series is customizable with a variety of non-standard features depending on the customers' requirements. BearCats are able to be fitted with moveable elevated platform systems called the Liberator and ARC by Patriot3, Inc., to enable tactical units to access a variety of elevated structures such as multi-story buildings, ships at docks, or aircraft during high-risk hostage or terrorist situations. The LAPD fits one of its four armoured Lenco vehicles with one such system along with many other local and state law enforcement agencies.[5]

Some of the BearCat's features include: 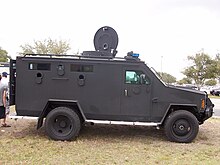 BearCats of various configurations are in use by the following agencies and departments around the world with over 500 in use in the United States alone.[30]