The Lexus SC (Japanese: レクサス・SC, Rekusasu SC) is a grand tourer that was retailed by Lexus, and built from 1991 through 2010. It features a front engine, rear-wheel drive design and seating for up to four passengers. The first-generation SC debuted as the V8-powered (1UZ-FE) SC 400 in 1991, and the I6-powered SC 300 was added in 1992. Both first-generation models were produced until 2000. The second-generation model, the SC 430, went into production in 2001. The SC 430 features a hardtop convertible design and a V8 engine. The first-generation SC was largely styled in California at Calty, and the second-generation SC was mainly conceived at design studios in Europe.

In Japan, the related third-generation Toyota Soarer, with which the first-generation SC originally shared body design and multiple components, featured a separate line-up of vehicle configurations and different powertrains. The fourth-generation Soarer sport coupe, largely identical to the SC 430, was superseded by its Lexus counterpart in Japan when the Lexus marque débuted there in 2005. The SC was the sole coupé in the Lexus lineup until the arrival of the IS C.[1] According to Lexus, the SC designation stands for Sport Coupe.[2] The LC replaced the SC lineup in 2017.

In the early 1990s,[6] following the début of Lexus, automotive press reports indicated a forthcoming Full-size Lexus coupé to compete with other luxury GT coupés of other marques like the Mercedes-Benz CL, Acura Legend coupe and later the Acura CL, Mazda Eunos Cosmo, Buick Riviera, Cadillac Eldorado, Lincoln Mark VIII, Jaguar XJS, Bentley Continental, Maserati Shamal/Ghibli, Ferrari 456 and BMW 8 Series coupe. At that point, Toyota had no genuine luxury coupés in its model range. A coupe would complement the successful Lexus flagship model, the V8-powered, rear-wheel drive LS 400 sedan.[6] The coupé was going to be targeted towards the American market,[7] and the development effort for its exterior design was handed over to the Calty Design Research center in California in 1987.[6]

The American Calty design team took a different approach to designing the car,[8] using plaster molding shapes to design the body,[6] and working three-dimensionally instead of the traditional 2-D sketch approach.[6] As described by design chiefs Denis Campbell and Erwin Lui,[6] the result was a car that was based on "emotion and feeling" rather than linear aesthetics. The resulting design possessed almost no straight edges, and produced a drag coefficient of Cd=0.31.[6][9] The production design concept by Lui was approved at the beginning of 1989, resulting in Lui being sent back to Japan for 4 months to assist in completion of the production design.[10] According to automotive journalist Bill Russ, the SC design was considered influential among automotive designs of the time.[7]

Production of the Soarer started in April 1991 at the Motomachi plant in Toyota, Aichi,[3] with the Lexus SC produced alongside the Soarer at a second Higashi Fuji plant at Susono, Shizuoka.[4] Motomachi-sourced cars lasted until April 1997.[3] The Lexus SC platform was used to develop Toyota's next generation Supra, both vehicles were manufactured in the same plant.[11] 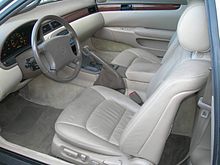 By the end of the decade, North American SC sales began dwindling due to the lack of significant design updates since the car's introduction and marketplace changes that led to loss of interest in coupes. 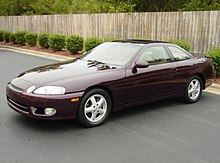 Sales of the automatic transmission SC 300 and SC 400 models formed the vast majority of models purchased.[17] The Lexus SC 400 was never officially sold in the British Isles, but many examples found their way across the Atlantic as personal imports.[18]

At the 1999 Tokyo Motor Show, Lexus displayed its Sport Coupe concept, a V8-powered convertible, signifying its plans for a replacement for the first-generation SC 300/400.[2] The production version of its new sports coupe-convertible, the SC 430, debuted at the New York Auto Show in April 2000.[22] The car was scheduled to go on sale in the second quarter of the following year.[23] Power was provided by a 4.3 L 3UZ-FE V8 engine with variable valve timing (VVT-i) mated to a five-speed automatic transmission. This engine was the same model as that found in the UCF30 Lexus LS. The SC 430's V8 could produce 288 hp (215 kW) and 430 N⋅m (317 lb⋅ft) of torque, allowing the coupe to go from 0–60 mph in 6.2 seconds.[24]

In contrast with the previous generation model, the redesigned Lexus SC was intended as a convertible from its inception.[25] The development team was led by chief engineer Yasushi Nakagawa from 1996 to 2000. Lexus designers from Europe and Japan worked together to create a streamlined design. A design theme was chosen in 1997 developed by Sotiris Kovos, who in return was named chief designer. Led by Kovos, designers travelled to the Côte d'Azur to develop the vehicle's exterior shape, and studied the region's architecture, lifestyle, and harbors.[23] The resulting convertible of 1998 received character lines similar to the region's yachts, in contrast with traditional waveform lines.[26] The vehicle's side profile, the product of extensive wind tunnel testing, was intended to channel air around the passenger compartment at high speed during top-down driving. Design patents were filed in Japan, at the Japan Patent Office on 14 June 1999 under patent number 1095312.[26] 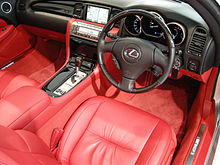 The SC 430 featured a retractable aluminium hardtop, all-leather interior with brushed-aluminum accents, navigation screen with folding wood panel, and 18-inch aluminium wheels.[26] Chrome Lexus emblems were mounted on the back of the front seat headrests.[25] The coupe has four seat belts and could technically seat four, but rear-seat space is limited.[27] The hardtop fully retracts in 25 seconds.[25] Standard luxury features include Burl Walnut or Bird's Eye Maple wood trim, a Mark Levinson premium sound system, DVD-based navigation system, and headlamp washers. For additional trunk space, as an option the SC 430 could be equipped with run-flat tires.[25]

At its launch, the SC 430 was marketed as the "jewel of Lexus", and as the marque's first convertible, was intended as a more ostentatious addition to the Lexus lineup.[25] Reviewers from Car and Driver magazine praised the SC 430 for 2002 as "an unqualified success", calling it "comfortable, fast, smooth, and quiet" with "all of the virtues expected in a patrician roadster."[28]

In 2004, Lexus unveiled the Lexus SC "Pebble Beach Edition", a limited-production model of the SC. The special edition SC was produced in partnership with the Pebble Beach Company , and featured a unique exterior and interior color combination which changed with each model year. This edition was offered for model years 2004 through 2009 production of the Pebble Beach edition was limited to varying units each year (see table below for counts). Each Lexus SC Pebble Beach edition coupe exhibited: unique colors (changed each year), special badging (featuring the "Lone Cypress" logo) on the front fenders, center console, and floor mats. For the 2006 model, a rear spoiler and spider alloy wheels was also included. In October 2009 Road & Track published some pictures of that model year.[29]

In 2004 and 2005, J.D. Power and Associates' Initial Quality Survey awarded the SC 430 as the highest ranked premium luxury vehicle.[30][31] Kelley Blue Book gave the SC 430 its Best to Hold Value Award in 2002.[32] In June 2004, a custom-designed Carolina Herrera SC 430 was shown at the Madrid Motor Show.[33] The special edition SC 430 CH used a 'Testa di Moro' body color, with matching interior leather and carpeting, along with designer logos on the wheels and door sills.[34] A line of accessories was also developed for the vehicle.

In 2012, Top Gear presenters Jeremy Clarkson and James May chose the Lexus SC 430 as the worst car ever built in their film The Worst Car in the History of the World. They criticized its handling, ride and style, with May calling the ride "absolutely diabolical", and stated that a big manufacturer should have known better.

In 2005 for the 2006 model year, the SC 430 was updated, with changes that included redesigned alloy wheels and the introduction of Bluetooth capability. In late 2005, the SC 430 premiered along with the Lexus marque in Japan; it was manufactured at the Kanji (Kanto Jidosha) assembly site in Japan.[35] The SC 430 was sold in North America, Europe, Oceania, and Asia; unlike its predecessor, the SC 430 was officially imported to the British Isles;[36] the old SC 400 had been a popular personal grey import.[18]

In 2010, a final special edition model for Japan, the SC 430 Eternal Jewel edition, was produced, limited to 200 units.[37] The 2010 model was the last automobile from any major manufacturer in the United States to ship with a cassette tape deck.[38]

Production of the second-generation SC ended in July 2010 after nine years of production, but Lexus was still using them in the Super GT until the 2013 season ended.[39]

In July 2008, Edmunds InsideLine had reported that Lexus had cancelled the next generation SC due to slowing sales.[40] A company spokesman did not confirm or deny the rumors, but called the report in the possible replacement with the introduction of the Lexus LFA as "unfounded speculation."[41] Lexus subsequently announced the production of the SC 430 model for 2009,[42] and in 2010.

Designated LF-LC for Lexus Future-Luxury Coupe, the concept two-door vehicle premiered in January 2012 at the North American International Auto Show. The vehicle's exterior and interior styling was created by the Calty Design Research center in Newport Beach, California, which previously developed the exterior styling of the first-generation Lexus SC coupe.[43][43]

The LF-LC was produced as a design study for a driver-focused vehicle at the direction of the Lexus Center in Japan, and work began on the concept in May 2010.[43] The exterior appearance of the LF-LC was inadvertently leaked by Road & Track magazine several weeks prior to its scheduled auto show debut, when a preview of its February 2012 issue with the LF-LC on its cover (under the headline "Stunning! New Lexus Super Coupe") was posted to YouTube.[46]

A series production model inspired by the 2012 LF-LC Concept is being developed under the Toyota 950A development program. Introduced at the 2016 North American International Auto Show, it went on sale as the Lexus LC 500 in early 2017, based on the new Toyota GA-L modular rear-wheel drive platform and the fifth generation LS flagship.[47]

In 2006 the SC 430 was entered in the (Super GT) race series in the GT500 class (cars with approximately 500 horsepower). Extensively modified from the factory car, the engine used is a modified version of the SC 430's 3UZ-FE V8 that was also used in the Toyota Supra racing car from previous years.

The new SC 430 based race cars were immediately competitive with former GT500 champion Juichi Wakisaka and no. 2 driver André Lotterer driving the Open Interface TOM's SC to victory at the opening round at Suzuka giving the SC 430 its first victory on its debut race.[48] Juichi Wakisaka and Andre Lotterer also won the GT500 class championship during the same year. In 2007, Lexus SC fully replaces Supras in the Toyota side, a Zent Cerumo SC 430 driven by Yuji Tachikawa was victorious in the GT500 opening round race.[49]

In 2012, two years after production had ended the 430 continued to be a force in Motorsports. Namely in Formula Drift with the Achilles Radial Lexus SC430 powered by a 2JZ and piloted by Daigo Saito.[citation needed]

Sales and production data for the first and second generations, based on manufacturer's data: