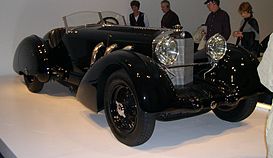 The Mercedes-Benz SSK (W06) is a roadster built by German automobile manufacturer Mercedes-Benz between 1928 and 1932. The name is an abbreviation of Super Sport Kurz, German for "Super Sport Short", as it was a short wheelbase development of the Mercedes-Benz Modell S. The SSK's extreme performance and numerous competitive successes made it one of the most highly regarded sports cars of its era.[1][2]

The SSK was the last car designed for Mercedes-Benz by Ferdinand Porsche before he left to found his own company.[3][4] The SSK is an evolution of the 1927 Modell S (S for Sport) which was based on the Modell K (K for "Kurzer Radstand" which means short wheelbase) variant of the Mercedes-Benz Typ 630. The SSK chassis was 19 inches (480 mm) shorter than the Modell S to make the car even lighter and more agile for racing,[5] especially short races and hillclimbs.[6]

Fitted with a supercharged single overhead camshaft 7-litre straight-6 engine[6][7] producing 200–300 metric horsepower (150–220 kW) and over 500 lb⋅ft (680 N⋅m) of torque (depending on the state of tune),[7] the SSK had a top speed of up to 120 miles per hour (190 km/h), making it the fastest car of its day.[8] The supercharger on the SSK's engine was operated by a clutch that was engaged by fully depressing the throttle pedal and then giving the pedal an extra push. Backing off the throttle pedal disengaged the supercharger clutch.[6]

The S/SS/SSK line was one of the nominees in the penultimate round of voting for the Car of the Century award in 1999, as chosen by a panel of 132 motoring journalists and a public internet vote.[11]

Fewer than 40 SSKs were built during its production span, of which about half were sold as Rennwagen (racing cars).[12] Many were crashed while racing and subsequently cannibalised for parts. Only four or five entirely original models remain, and their scarcity and rich heritage make them among the most sought after cars in the world; a 1929 model was auctioned at Bonhams in Chichester in September 2004 for £4.17 million (US$7.4 million), making it the second most expensive automobile ever sold at that time.[12][13] Another SSK, a streamlined "Count Trossi"–bodied version (see photo) owned and restored by fashion designer Ralph Lauren,[14] has won best of show at both the 1993 Pebble Beach Concours d'Elegance and the 2007 Concorso d'Eleganza Villa d'Este.[15][16][17]

The car is a favorite of the manga and cartoon character Lupin III, appearing throughout the enteriety of the first and second anime series along with movies and specials.