Microcar is a term often used for the smallest size of cars,[1] with three or four wheels and often an engine smaller than 700 cc (43 cu in). Specific types of microcars include bubble cars, cycle cars, quadricycles and voiturettes, and the Japanese equivalent is the kei car.

Microcars are often covered by separate regulations to normal cars, having relaxed requirements for registration and licensing. Most microcars are powered by petrol or diesel engines, however electric-powered microcars have become more common in recent years.

Voiturette is a term used by some small cars and tricycles manufactured from 1895 to 1910.

Cyclecars are a type of small, lightweight and inexpensive car manufactured mainly between 1910 and the late 1920s. 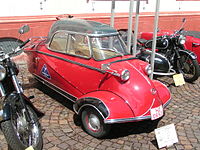 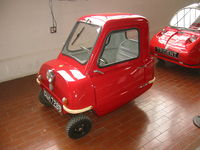 The first cars to be described as microcars (earlier equivalents were called voiturettes or cyclecars) were built in the United Kingdom and Germany following World War II, and remained popular until the 1960s. They were originally called minicars, but later became known as microcars.

Microcars have three or four wheels, although most were three-wheelers which, in many countries, meant that they qualified for lower taxes and were licensed as motorcycles.[2] Another common characteristic is an engine displacement of less than 700 cc (43 cu in),[3][2][4] although several cars with engines up to 1,000 cc (61 cu in) have also been classified as microcars.[5][1](p7) Often, the engine was originally designed for a motorcycle.[6]

Microcars originated in the years following World War II, when motorcycles transport was commonly used.[7](p7) To provide better weather protection, three-wheeled microcars began increasing in popularity in the United Kingdom, where they could be driven using only a motorcycle licence.[2][8] One of the first microcars was the 1949 Bond Minicar.

Microcars also became popular in Europe. A demand for cheap personal motorised transport emerged, and their greater fuel efficiency meant that microcars became even more significant when fuel prices rose, partly due to the 1956 Suez Crisis.[6][9]

The microcar boom lasted until the late 1950s, when larger cars regained popularity.[9][10] The 1959 introduction of the Mini, which provided greater size and performance at an affordable price, contributed to the decline in popularity of microcars.[2] Production of microcars had largely ceased by the end of the 1960s, due to competition from the Mini, Citroen 2CV, Fiat 500 and Renault 4.

Several microcars of the 1950s and 1960s — mostly produced in Germany — were nicknamed bubble cars.[11][12] That was due to the aircraft-style bubble canopies of vehicles such as the Messerschmitt KR175, Messerschmitt KR200 and the FMR Tg500. Other microcars, such as the Isetta, also had a bubble-like appearance.

German manufacturers of bubble cars included former military aircraft manufacturers Messerschmitt and Heinkel. BMW manufactured the Italian Iso Rivolta Isetta under licence, using an engine from one of their own motorcycles.

The United Kingdom had licence-built right-hand-drive versions of the Heinkel Kabine and the Isetta. The British version of the Isetta was built with only one rear wheel, instead of the narrow-tracked pair of wheels in the normal Isetta design, in order to take advantage of the three-wheel vehicle laws in the United Kingdom. There were also indigenous British three-wheeled microcars, including the Peel Trident.

Recent microcars include the 2001 Aixam 5xx series. The Smart Fortwo is often called a microcar in the United States;[13][14] however it requires a car licence to drive, unlike most microcars.

The European Union introduced the quadricycle category in 1992. In several European countries since then, microcars are classified by governments separately to normal cars, sometimes using the same regulations as motorcycles or mopeds. Therefore, compared with normal cars, microcars often have relaxed requirements for registration and licensing, and can be subject to lower taxes and insurance costs.

There are also a variety of microcar trucks, usually of the "forward control" or van style to provide more cargo room. These might be used for local deliveries on narrow streets that are unsuited to larger vehicles. The Piaggio Ape is a three-wheeled example.[15]

Microcars by country of origin

Main article: List of microcars by country of origin