The Milwaukee Mile is a one-mile-long (1.6 km) oval race track in the central United States, located on the grounds of the Wisconsin State Fair Park in West Allis, Wisconsin, a suburb west of Milwaukee. Its grandstand and bleachers seated approximately 37,000 spectators. Paved 67 years ago in 1954, it was originally a dirt track. In addition to the oval, there was a 1.8 mile (2.8 km) road circuit located on the infield.

As the oldest operating motor speedway in the world, the Milwaukee Mile has hosted at least one auto race every year from 1903 to 2015 (except during U.S. involvement in World War II).[2] The track has held events sanctioned by major bodies, such as the AAA, USAC, NASCAR, CART/Champ Car World Series, and the IndyCar Series. There have also been many races in regional series such as ARTGO.

On December 16, 2009, Wisconsin State Fair Park officials confirmed that the Milwaukee Mile would not host any NASCAR or IndyCar races in 2010.[3] NASCAR confirmed that their June Nationwide Series date would remain in Wisconsin for 2010, as they announced they would hold a race at Road America for the first time since the Grand National Series raced there in 1956.[4] NASCAR also announced on January 20, 2010, that the Milwaukee date for the truck series would be moved to August.[5] The track hosted two ASA Late Model Series races in 2010.[6]

IndyCar returned to the track in 2011, but the Mile was left off of the preliminary 2012 schedule after a poorly attended 2011 event that resulted in part from an inexperienced promoter. In February 2012, it was announced that IndyCar would return to the Mile on the weekend of June 15–16.[7] The event was promoted by Andretti Sports Marketing, owned by former Indy driver Michael Andretti, and was billed as the Milwaukee IndyFest.[8] The event included open-wheel racing featuring the IndyCar Series and the Firestone Indy Lights, as well as a driver question period and autograph sessions, music and other attractions. The series again left after the 2015 season, and the track hosted no major professional races until ARCA returned in 2021.

The track was a one mile (1.6 km) private horse racing track by 1876. In 1891, the site was purchased by the Agricultural Society of the State of Wisconsin to create a permanent site for the Wisconsin State Fair (which it still is).

Barney Oldfield's success at the Mile helped make him a legend. He set the track record in 1905 and raised his speed in 1910 to 70.159 mph (112.910 km/h) in his "Blitzen Benz". In 1911, Ralph DePalma won the first Milwaukee Mile Championship car race, four years before his Indianapolis 500 win. Oldfield drove a gold car built by Harry Miller that completely enclosed the driver (called the "Golden Submarine"), and in June 1917, he beat DePalma in a series of 10 to 25-mile (40 km) match races.

The July 17, 1933, race was rained out. Wilbur Shaw and the other drivers convinced the track promoters to run the race the following day and the term "rain date" was born.

The 1939 race was the first AAA Championship race.

The 1937 non-championship AAA event was best known for running 96 laps (instead of 100) due to a scoring error. It was won by Rex Mays, who continued his domination throughout the 1940s by winning in 1941 and the next race (after World War II) in 1946.

The tradition of hosting the "race after the Indianapolis 500" began in 1947. In the 1969 film, Winning, the character Frank Capue, played by actor and part-time race car driver Paul Newman, remarks, “Everybody goes to Milwaukee after Indy.”

The Milwaukee Mile held more national championship midget, stock, and Indy car races than any other track in the country between 1947 and 1980.

NFL stadium in the middle of the quarter-mile oval

The infield of the quarter-mile dirt infield track at the Mile near the current media center was also the location of a football stadium, informally known as the Dairy Bowl.[9] It hosted the NFL's Green Bay Packers from 1934 through 1951, including the NFL championship game in 1939, a 27–0 shutout of the New York Giants on December 10 to secure a fifth league title.[10][11][12]

In 1940 and 1941, the Dairy Bowl also served as the home of the Milwaukee Chiefs of the third American Football League. The 50-yard line sat where the start-finish line is currently located.[13] The city's own entry in the NFL, the Milwaukee Badgers, lasted just five seasons, from 1922 to 1926, and played at Athletic Park, renamed Borchert Field in 1928. 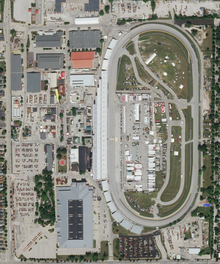 Satellite image of Milwaukee Mile (May 2018)

In 1963, Jim Clark won the first victory for a rear-engined Indy Car in his Lotus-Ford.

In 1964, A. J. Foyt dominated in what was to be his final race in a roadster. The rear-engine began dominating races in the 1960s, replacing the front-engine roadster, but not before one unexpected race. In 1965. A. J. Foyt had to tow his front-engine backup dirt car from Springfield because his primary car and crew would not make it to Milwaukee in time for qualifying. He prepared the car himself for pavement, and put the car on the pole with a speed of 107.881 mph (173.618 km/h). He led for 16 of 200 laps, and finished second.

The track was repaved before the 1967 season. By 1967. both the 1/4 dirt track and 1/2 mile road course were closed to accommodate the pit area. Lloyd Ruby swept both USAC races held at Milwaukee in 1968, giving him three wins at the Mile including his first win there in 1961. The June 1968 Rex Mays 150 was a tragic affair as a three-car crash and ensuing inferno killed Ronnie Duman.

In the 1983 CART race, Tom Sneva finished first by 10 seconds. Post race inspection found an improper ground clearance on the side mount skirts, so second-place finisher Al Unser was given the win. On appeal, the decision was overturned, and Sneva was awarded the win two weeks later. Sneva would repeat the win one year later in a new 200 kilometer race.

The last sports car race was held on the infield road course on June 16, 1984. The track had deteriorated. It was repaved before October 2004.[14]

In the 1985 CART event, Mario Andretti won the pole on his way to his fourth career track win. His son Michael won the next two races in 1986 and 1987. Milwaukee was also the site of Mario Andretti's first ever paved oval track win in Indy Car racing in 1966.

Al Unser Jr. won the 1990 CART race after Michael Andretti ran out of fuel with two laps to go. The victory was the ninth for the Unser family (father Al Unser Sr. and uncle Bobby Unser each have four).

The 1991 CART event, however, was dominated by their archrival Andretti family. For the first time in the worldwide history of auto racing, three member of the same family finished 1–2–3. Michael Andretti won the race, second went to his cousin John, and third to his father Mario. Michael's brother Jeff finished 11th.

Milwaukee was in danger of losing its CART date in 1992. To save the date, the fair board hired Carl Haas to organize all track activities.

The 1992 CART event was again won by Michael Andretti. In 1993, reigning Formula One champion Nigel Mansell got his first oval track win on his way to winning the CART championship. In 2000, Juan Pablo Montoya gave Toyota its first CART win. History was made again when Ryan Hunter-Reay led all of 250 laps to the victory. The final Champ Car race was held in 2006, with eventual champion Sébastien Bourdais winning.

The Indy Racing League IndyCar Series came to the Mile in 2004. Dario Franchitti won the inaugural event. His team, Andretti Autosport has won three races at the Mile with Tony Kanaan winning in 2006 and 2007. The other races have been won by Penske Racing drivers Sam Hornish Jr. in 2005, Ryan Briscoe in 2008, and Chip Ganassi Racing driver Scott Dixon in 2009. After a one-year absence from Milwaukee, Franchitti won in the series' return to the track in 2011, for Ganassi. After promoter conflicts in late 2015, it was announced that the series would not return for the following season. Many famous people including George W. Bush, Barack Obama, Elvis Presley and Patricia Egan Jones have visited the Milwaukee Mile.[15]

Crowd at the 2009 Nationwide race

On July 3, 1993, the NASCAR Busch Series returned to Milwaukee. The event was won by Steve Grissom. In 1996 Wisconsin native Dick Trickle was passed with four laps to go by Buckshot Jones, who nosed out Mike McLaughlin and won the race from the furthest starting spot (32nd) and by the closest margin of victory in NASCAR Xfinity Series history (.002 seconds). The Busch Series ran every year from 1993 to 2009. Five drivers who won the NASCAR Busch race at Milwaukee went on to win the Busch Series championship in the same year (Steve Grissom in 1993, Randy LaJoie in 1997, Dale Earnhardt Jr. in 1998, Jeff Green in 2000, and Greg Biffle in 2002). Biffle became the first repeat winner when he scored back-to-back victories in 2001 and 2002. Despite Trickle having come the closest previously, two NASCAR Busch Series races have been won by Wisconsin natives (Johnny Sauter/Necedah in 2005 and Paul Menard/Eau Claire in 2006). Menard also became the third driver to make the race at Milwaukee his first career series win, joining Jones in 1996 and Casey Atwood in 1999.

The NASCAR Craftsman Truck Series (CTS) began racing at Milwaukee in its inaugural season in 1995. Mike Skinner won the event. The 1996 event featured 17 lead changes. The CTS has returned every season since 1995. Ted Musgrave became the only repeat winner when he followed up victory in 2001 with a second triumph in 2004, both behind the wheel of the No. 1 Mopar Performance Parts Dodge for Jim Smith and Ultra Motorsports. Musgrave is also the only Wisconsin native to have won the race. Two drivers have the distinction of having won both a NASCAR Craftsman Truck Series race and a NASCAR Xfinity Series race at Milwaukee. Ron Hornaday won in the truck race in 1996 and the Busch race in 2004, while Greg Biffle won the truck race in 1999 and the Busch race in 2001 and 2002.

The following is a map of Milwaukee Mile: