A panel van, also known as a blind van, car-derived van (United Kingdom) or sedan delivery (United States), is a small cargo vehicle utilizing a passenger car chassis, typically with a single front bench seat and no side windows behind the B-pillar.[1] Panel vans are smaller than panel trucks or cargo vans, both of which utilize body-on-frame truck chassis.

Panel vans were a well-established body type by the end of the 1920s.[4]

Panel vans have experienced divergent evolution in America, Europe, and Australia, as a result of the different passenger car platforms upon which panel vans are based in each region.

A panel van is often known as a "delivery" or "sedan delivery" in North America. It's an older term that usually only applies to station wagon-based vehicles (sedan deliveries/delivery wagons) such as the Chevrolet Delray and Ford Courier,[5] or pickup-based vans (panel deliveries).[6] Large, boxy unibody vans based on truck platforms (such as the Ford Transit,[7] Ram ProMaster,[8] and Chevrolet Express[9]) as well as smaller unibody vans (like the Ford Transit Connect[10] and Ram Promaster City[11]) are usually referred to as cargo vans or just panel vans. Larger vehicles built on a chassis cab with a custom cargo box are usually called box trucks or moving vans. 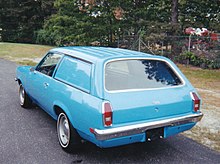 In the 1970s, Chevrolet and Ford offered subcompact sedan deliveries with the Chevrolet Vega Panel Express and the Ford Pinto Panel Wagon. The Vega Panel Express was introduced in September 1970 and it was Chevy's first sedan delivery in ten years since the final full-size model was offered in 1960.[17] The Vega Panel Express body style accounted for less than 2% of the total Chevrolet Vegas produced during the 1971 through 1975 model years.[16] First-year sales of the Vega Panel Express peaked at 7,800 units and after leveling off to 4,000 units per year, only 1,525 were sold in 1975.[18] The Pontiac Astre Panel, Pontiac's version of the Vega Panel Express, was available in Canada in the 1973–75 model years and in the US for 1975.[14] The Pinto Panel Wagon was introduced in 1976 and was offered in both a commercial and a "factory customized" Pinto Cruising Wagon version that featured a round porthole style window on each side.[16] The Ford Courier name, previously used for Ford sedan delivery vans, began to be used with Ford's import pickup truck line.[19]

The small cargo vans currently sold by American manufacturers are from their overseas divisions, for example, the Ford Transit Connect and Dodge Ram ProMaster City.

From the 1950s onwards, a larger alternative to the panel van was the van (based on a commercial vehicle chassis instead of a passenger car chassis), such as the Volkswagen Type 2, the DKW van and the first-generation Ford Transit in 1965.[23][24][25]

In the United Kingdom, panel vans benefit from having lower taxes than station wagons[26] and do not have the speed restrictions which apply to larger vans.[27] This has given rise to some anomalies. Authorities and dealers are not always certain on what qualifies as a car-derived van.[28] SUVs and crossovers are also popularly turned into light commercial vehicles without rear seats.[29]

The first Holden panel van produced in Australia was the FJ Holden, which was released in December 1953,[30] although many manufacturers offered panel vans in their range prior to this.[31][32][33][34][35][36][37][38] Like many Australian panel vans, it was based on a corresponding ute and station wagon models. In May 1961, Ford Australia released a panel van version of the XK Falcon, marketed as the "sedan delivery" body style.[39] The first panel van by Chrysler Valiant was part of the CL Valiant model range and was introduced in April 1977.[40]

By the early 1970s, when panel vans were in decline in America, they had become cultural icons in Australia.[43] The most popular model was the Holden Sandman, which was marketed to surfing lifestyle.[44][45] The first Sandman was built in small quantities in 1974 in the HQ model range, but the model's popularity greatly increased in the subsequent HJ generation, which was released in October 1974.[46][47] In the 1979 movie Mad Max, a modified 1975 HJ Sandman model was one of the vehicles driven by the lead character (played by Mel Gibson).[48]

Ford's competitor to the Sandman was the Surferoo, which was introduced into the XB Falcon model range in 1973.[49][50] In 1977, the Surferoo was replaced by the more popular Sundowner, in the XC Falcon range.[46][44] The traditional tailgate style doors were also reintroduced as an option with the XC range.

In 1976, Chrysler released a similar model called the Drifter, which was part of the Chrysler CL Valiant product range. The Drifter ceased production in 1978.

Younger drivers were especially attracted to panel vans, not least because of the ease with which a mattress could be installed within the cargo bay. Consequently, panel vans also attracted nicknames such as "sin bins," and "shaggin' wagons".[51][52] During the 1970s many Australian panel van owners took to applying airbrush mural art to the sides of their vans, paralleling a similar trend in America.[53] Along with Volkswagen Kombi micro-busses, panel vans were popular with surfers, who could sleep in the cargo bay while carrying surfboards on the roof. 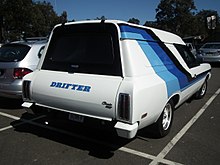 By the end of 1979, the Sandman had largely lost its place in the contemporary Australian youth culture – order figures were down and many of the vehicles were now being sold with the stripes and tailgate logos deleted. The final Sandman was in the Holden HZ series and featured V8 engines only, along with a four-headlight grille and under bumper front spoiler. In 1979, a basic HZ Holden panel van was priced at A$6,076, with the Sandman option package an additional A$1,700. If a buyer selected every Sandman extra, which would cost in excess of 50% more than a basic HZ panel van, Holden would include a velvet mattress with the Holden logo embroidered. The Sandman ute and panel van were phased out in October 1979, with the end of the HZ series.[54]

Panel vans generally declined in popularity through the 1980s. Holden's last panel van, the WB, ceased production in 1984.[55] Ford was the last manufacturer of Australian panel vans, until production of the XH Falcon, ceased in 1999.

In 2000, Holden unveiled a retro-styled Sandman show car based on the Holden VU Ute. While this Sandman was never released, an canopy or "camper shell" featuring the same styling was made available as an A$6,150 accessory for Holden utes from 2003 through 2006. Installation was complicated, however, and the rear window and cab wall of the ute were retained, preventing movement between the cargo bay and the passenger cab as was possible in purpose-built panel vans.[56]