Phelon & Moore manufactured motorcycles in Cleckheaton, Yorkshire, England from 1904 to 1967 particularly those under the Panther marque.[1] They became identified with one particular design of motorcycle which had a large sloping 40-degree single-cylinder engine as a stressed member of the frame. This design spanned the entire history of the company, starting with a 500 cc model and ending with a 645 cc model.[2]

The sloping stressed member concept was patented in 1900 by Joah ("John") Carver Phelon and his nephew Harry Rayner.[3] Phelon & Rayner made the first chain-driven motorcycle in 1900. They could not afford to put their first bike into production, so sold the design to Humber for royalties, and that design was produced by Humber till 1907. After Harry Rayner died in a car accident, Joah Phelon went into partnership with Richard Moore.[4]

Phelon & Moore was established in 1904, and their motorcycles were branded as P&M. The 1905 P&M featured an inclined single cylinder 4-stroke engine as a stressed member in the frame with 2-speed gear and chain drive to the rear wheel,[5] it being the 'first completely chain driven motor cycle'.[6] P&M motorcycles competed in the first International Six Days Trial (ISDT) in 1913 (now called the International Six Days Enduro).[7] Three P&M motorcycles competed in the 1914 ACU six days trial, all 3.5 hp solo models (of 498cc).[8]

In July 1914 P&M revealed details of their prototype 90 degree V-twin, their first deviation from the single cylinder motor cycles for which they were well known.[9] When the V-twin was launched in November 1914[10] it featured a 4-speed gear, and was of 770cc, rated as 6 hp. It appears only a handful of the twin were built, though it appeared in catalogues until 1916.[11] The four speed gear arrangement used on the V-twins was re-introduced for the single in 1922, and at the same time the engine capacity was increased from 499cc to 555cc.[6] This was the last model to carry the P&M name, later models being branded as Panther.

The Royal Flying Corps used P&M motorcycles during the First World War, keeping P&M busy throughout the conflict.[12] P&M were also selected as the suppliers when the RAC added sidecars to their range of vehicles in 1922.[13] 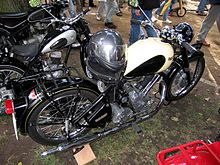 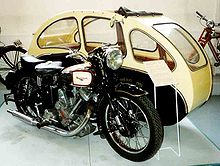 The first Panther was launched in 1924, but the Phelon & Moore name was not dropped until somewhere around 1929.

These heavyweight big single-cylinder "slopers" were often described as "firing once every lamp-post" due to their low rpm. Promoted as "The Perfected Motorcycle" they were noted for innovation for most of their history. Panthers were often used for hauling sidecars, a role in which the high torque output of a high capacity single-cylinder engine with its large flywheels was well suited, but the popularity of sidecar outfits eventually waned.

The combination of the advent of cheap cars and the collapse of the British motorcycle industry brought production to an end. They are simple and fairly robust machines which inspire enormous enthusiasm in their owners. These factors, combined with relatively low cost, have resulted in a fair number of Panthers being still in use.

Phelon & Moore also produced a range of lightweight machines, also generally carrying the name Panther or Red Panther, using their own four-stroke single engines and Villiers two-stroke engines. The Red Panther was famous for being the cheapest complete bike available in the thirties, priced at a fraction under £30.[15] In 1934 a 250 cc Red Panther won the Maudes Trophy.

During the scooter boom of the late 1950s, P & M imported a scooter (Scooterrot) and moped from French manufacturer Terrot, which were plagued with troubles. This gave P & M the chance to develop their own scooter, the Panther Princess, but this was not a success and helped bring about the demise of P & M as motorcycle manufacturers. In 1962 the receiver was called in, and production staggered on until 1966.

Stripped down version of Standard 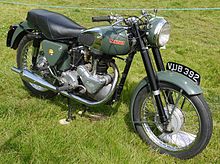