This article is about Citicar. For urban cars in general, see City car.
Not to be confused with CityCar.

The CitiCar is an electric car produced between 1974 and 1977 by a U.S. company called Sebring-Vanguard, Inc., based in Sebring, Florida. Sebring-Vanguard was sold to Commuter Vehicles, Inc., which produced similar vehicles (the Comuta-Car and Comuta-Van) from 1979 to 1982. Its exterior design lives on in the Norwegian Kewet. Accounting for all CitiCar variants, a total of 4,444 units were produced up to 1979, the most since 1945 for an electric car assembled in North America until surpassed by the Tesla Model S.[1]

Inspired by Club Car's golf cart design and partly in response to the 1970s fuel crisis, a company called Sebring-Vanguard produced its first electric vehicle, the Vanguard Coupe (sometimes referred to as the EV Coupe), in 1974. Company founder and President Robert G. Beaumont,[2] working with designer Jim Muir, came up with the CitiCar after this earlier EV Coupe was not an immediate success. This second attempt was still based on a lot of the Club Car's mechanical features, though.

Produced in its plant in Sebring, Florida, the CitiCar was a small wedge-shaped electric vehicle. Early versions had no extra features and can be considered an experiment in minimalist automotive design; it was as basic a people mover as could be bought at the time. By 1976, enough CitiCars were produced to promote Sebring-Vanguard to the position of being the U.S. #6 auto manufacturer after GM, Ford, Chrysler, AMC, and Checker Motors Corporation; but ahead of Excalibur and Avanti Motors. Production of the CitiCar continued until 1977 with about 2,300 CitiCars produced. 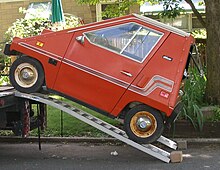 The later Comuta-Car, produced by Commuter Vehicles, Inc. retained all of the Transitional CitiCar changes including the larger 6 HP motor and drive train arrangement, but moved the batteries from under the seat to battery boxes behind the bumpers, making the vehicle about 16 inches (410 mm) longer than the 8-foot (2.4 m) long CitiCar. ComutaCars also incorporated additional frame supports to meet the new DOT standards. One of these supports created the center console like rug covered divider between the driver and passenger.

The CitiVan, was a limited production extended-wheelbase version of the third model variant of the CitiCar. Produced and sold from 1977 (by Sebring-Vanguard) to 1979 (by Commuter Vehicles, Inc.), basically unchanged. It is rumored that only 11 of these smaller Vans were built and sold as the CitiVan but an unknown more were built and sold in 1979 as the first year Comuta-Van. The main design differences between the 1979 Comuta-Van and the later Postal Comuta-Van is that the much smaller 1979 Comuta-Van has swing out side doors and a hatch back window. The much larger Postal Comuta-Van has sliding side doors and a swing out rear entrance door.

Another CitiCar variant was called the Postal Comuta-Van. These were all right-hand-drive vehicles, initially built as a government contract with the USPS by Commuter Vehicles, Inc.. To make a Comuta-Van to meet government standards, the overall length was increased to 142 in (3,607 mm), as well as a 12 HP motor, 72v battery pack, and 3-speed transmission, among other additions. The Postal version was only equipped with one 'right hand' drivers seat. However, some were sold to the public with an additional passenger seat and much more room for storage behind the seats. It was the only model with a front hood access and sliding side doors. All vehicles were built with space frames made from welded aircraft grade aluminum tube and ABS plastic bodies. They all had solid axles with leaf spring suspension front and rear. Top speeds were about 30 mph (48 km/h) - 50 mph (80 km/h), and range was up to 40 miles (64 km) per charge.

The second model of the CitiCar (SV-48):

NOTE: The top speed of any particular C-Car will vary somewhat depending on many factors, including: tire pressure, vehicle weight, alignment, brake drag, windows open/closed, transaxle oil viscosity, temperature, chemistry, age, condition of the batteries, force of possible headwinds/tailwinds, etc. These factors can make some C-Cars a bit faster or slower than others.

History of upgrades and changes to the CitiCar by serial number 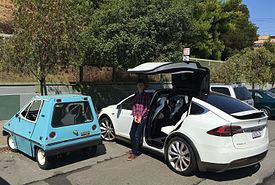 A Citicar by the side of a modern all-electric Tesla Model X (right). Accounting all variants, the Citicar had the record for most production of electric cars from an American manufacturer since 1945 until surpassed by the Tesla Model S.[1]

(Note - This is a compilation of CitiCar factory changes from 1974 to 1977; with some Comuta-Car information added. The information is gisted from the owners and service manuals, and the CitiCar Roster.)

In December 1974, CitiCar number #1501 (124SR1501) was the first factory-built 48 volt CitiCar. These vehicles were designated as model SV-48, compared to the earlier SV-36. All CitiCars made after this vehicle were produced as 48 volt models with the newer 3.5 hp GE series motor.

(Note - A number of the earlier SV-36 models were returned to the factory or to dealerships in order to upgrade to the 48 volt system.)

The turn signal switch change required a number of other changes –

In addition, there were a number of technical improvements –

After the changes at car #1751, there was a minor glitch noted in the service manual. Since a lamp was removed from the instrument panel, there were fewer lamps, and the dimmer would not allow the lamps to go all the way off.

On car #2211 (July 1975), a switch was added to the dual master cylinder along with a small PC board behind the dash to warn of problems with brake hydraulics, as well as indicating if the parking brake is engaged. Before #2211, the brake lamp was a parking brake engaged indicator only.

Prior to car #2426 (September 1975) the accelerator was returned to off via a single accelerator spring. Sebring-Vanguard issued a Service Note to modify all previous vehicles to add another spring. After #2426, a dual spring accelerator pedal was standard.

Around December 1975 there was another major change in the CitiCar assembly line. All CitiCars #2781 and higher were equipped with a 5.17:1 ratio Dana/Spicer rear axle and a 6 hp GE motor. There was an optional 'hilly' Dana/Spicer axle with a higher ratio also available for these cars which allowed better hill climbing performance, but at the cost of a slightly lower top speed. These vehicles are also known as 'Transitional' Citicars.

On car #2842 (December 1975), a micro switch was added to the foot brake to prevent the accelerator from functioning when the brake was pressed.

The Comuta-Cars produced as 1979 models share the VIN arrangement of earlier CitiCars, but end with an 'A' suffix. These "A" model vehicle frame numbers were interspersed within the CitiCar series between 2000 and 2300, but do not appear to duplicate any CitiCar production. There is speculation that these frames may have been unsold dealer stock that was included in the bankruptcy sale to Commuter Vehicles, Inc. Model 'A' Comuta-Cars are configured like other Comuta-Cars (batteries in bumpers, Dana axle, heater vents, sliding windows, etc.) Some Transitional CitiCars produced after June 1976 have serial numbers ending with the "A" suffix as well. It is believed that these also may have been unsold earlier dealer stock, that was upgraded to the 1976 1/2 Transitional Model standards (Dana axle, heater vents, sliding windows, etc.)

There are some indications that after January 1982, a few Comuta-Cars may have been sold as home assembly kits for off road or to be registered as Home Built EV’s in the buyer’s state.

The last known Comuta vehicle to be factory built was a special order 72 V DC Pick-Up in 1986. This vehicle was sold without a serial number and only lacked windshield wipers and directional signals to meet DOT road worthiness.