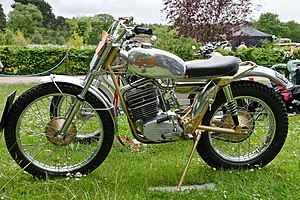 Sprite manufactured trials and scrambles frames which were usually available as a kit-form motorcycle to avoid UK Purchase Tax.[2][4] The first machine was developed as a scrambler with Alpha 246 cc two-stroke engine and a modified Cotton frame, followed by their own Sprite-framed version and a slightly larger frame-only (without engine) option to use a 490 cc Triumph unit construction engine/gearbox for the larger class of scrambling. The trials machine was developed for production in late 1964 using a Villiers 36A/37A 246 cc engine with iron barrel or at a higher cost, a Greeves light-alloy cylinder, and a Miller magneto.[1][2]

The frames were easily distinguishable from one another; the trials frames had twin, narrow, almost parallel down-tubes, whilst the scrambles frames used splayed tubes which also carried the oil where necessary, avoiding the need for a separate oil tank. A fibreglass fuel tank, mudguards and seat/tailpiece/race number plate were all available as required. The trials version had an extended tailpiece with mounting for a road number-plate necessary in Combined trials which had timed road-stages linking with the several-to-many Observed Sections which historically could be scheduled as a typical part of a traditional UK trials event.[5]

Under UK Construction and Use Regulations, competition machines intended for road-use were required to comply with statutory basics of sound engineering, a test certificate, mudguards, seat, audible warning device and number plate. Lighting was not required, but if fitted had to be complete and working.[6]

The frames were initially available with AMC and Norton telescopic front forks and British Hub Co. (Motoloy) brakes front and rear.[7] The pivoting rear-forks on all models were fitted with Silentbloc bushes.[1] A later option was Metal Profiles (REH) front forks.

The Sprite marque should not be confused with the older British Spryt, a small-capacity two-stroke engine produced by Excelsior in Coventry and fitted to the historic Corgi minibike.