A straight-three engine,[1] also known as an inline-triple,[2][3][4][5] or inline-three[6][7] (abbreviated I3 or L3), is a reciprocating piston internal combustion engine with three cylinders arranged in a straight line or plane, side by side.

Straight-three engines generally employ a crank angle of 120°.[8] This gives perfect first and second order balance on reciprocating mass, but an end-to-end rocking motion is induced because there is no symmetry in the piston velocities about the middle piston. The use of a balance shaft reduces this undesirable effect.

An inline three-cylinder engine with 180° crankshaft can be found in early examples of the Laverda Jota motorcycle made by Italian manufacturer Laverda. In these engines, the outer pistons rise and fall together like a 360° straight-two engine. The inner cylinder is offset 180° from the outer cylinders. In these engines, cylinder number one fires, then 180° later cylinder number two fires, and then 180° later cylinder number three fires. There is no power stroke on the final 180° of rotation. This unusual crank angle came to be due to lack of proper tooling at the factory, which also made vertical twin engines that utilized a 180° crankshaft.[citation needed] After 1982, this engine had the regular 120° crank angle.[citation needed]

Triumph's 2020 Tiger 900 has been developed with a so-called "T-Plane" big-bang firing order engine. This design has crank throws at 90° intervals, such that the throws for cylinders 1 and 3 are separated by 180° - the three throws together forming a "T" shape when viewed from the end. Triumph claim this configuration improves engine character and sound,[9] as well as off-road feel and "rider connection to the rear wheel".[10] Firing intervals are 180-270-270 crank degrees. 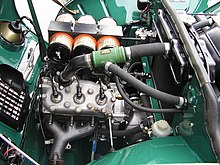 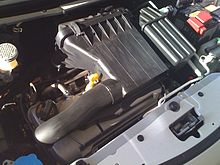 The Volkswagen Group is known for using three-cylinder petrol and diesel engines, in the Audi A2, Volkswagen Polo, Volkswagen Up!, Volkswagen Fox, Volkswagen Lupo, SEAT Ibiza, SEAT Córdoba, SEAT Mii, Škoda Citigo and Škoda Fabia. These engines range from 1.2-litre petrol,[14] with four valves per cylinder, that delivers 47 to 65 kilowatts (64 to 88 PS; 63 to 87 bhp), to 1.4 TDI diesel,[15] that delivers 51 to 66 kilowatts (69 to 90 PS; 68 to 89 bhp) and has turbocharger with variable vane geometry. The most innovative three-cylinder engine the Volkswagen Group released was the 1.2 TDI diesel (launched in 1998),[16] that was one of the first all-aluminium diesel engines and at the time of release was the lightest and most economic engine in production. It was used in the "3L" versions (from its diminutive fuel consumption of 3 litres per 100 kilometres or 94 miles per imperial gallon) of the Audi A2 and the Volkswagen Lupo. Another three-cylinder engine is the 1.2 TDI diesel launched with the fifth generation of Volkswagen Polo (in 2009), that uses common rail injection (unlike the previous 1.2 TDI engine, which used unit injectors).

Subaru used a straight-three engine in the Subaru Justy,[6] and the export version of the Subaru Sambar, called the Subaru Sumo, which had their Subaru EF engine.

In the 1950s and 1960s, the Saab 93, Saab 95, Saab 96, and certain DKW automobiles were powered by inline-three-cylinder, two-stroke engines. Also, the Wartburg automobiles manufactured in Eastern Germany, and FSO Syrena manufactured in Poland, used this kind of engine.

The first generation Honda Insight (2000–2006) used a 1.0-litre inline-three engine in conjunction with an electric motor in its hybrid system.

Nissan has developed a 1.2-litre three-cylinder version of their HR series of petrol engines, which is used since 2010 for the Nissan Micra, the Nissan Almera (Thailand) and the Nissan Note. There is also a supercharged version, with direct injection and variable valve timing.[19]

Exclusively for the Indian market, the Chevrolet Beat is offered with a 1.0-litre (936 cc) three-cylinder diesel engine, called XSDE (Xtra Smart Diesel Engine). It was co-developed by GM Powertrain Torino and the GM Technical Center India, and uses the Fiat MultiJet diesel technology.[20]

Ford started offering their new turbocharged 1.0-litre three-cylinder EcoBoost unit in the Focus from 2012, having never before built a regular production car engine with fewer than four cylinders.[21] This new engine features several innovations, including the use of an unbalanced flywheel to shift the inherent three-cylinder imbalance to the horizontal plane where it is more easily managed by engine mounts, and so remove the need to use balancer shafts.[22] In 2013, it was made available for the Fiesta. In 2015, this engine was named International Engine of the Year ‘Best Engine Under 1.0‑litre’ for the fourth consecutive year.[23] Ford claimed at the time that ten models in Europe could be equipped with the 1.0-litre EcoBoost engine, and that one in five all-new Ford vehicles sold in Europe in 2014 were equipped with the 1.0-litre unit, including almost two in five for Fiesta. In 2016, Ford offered a 1.0 litre turbocharged 3-cylinder EcoBoost engine with cylinder deactivation, claimed to be a world first for this feature in three-cylinder engines.[24] The 7th generation of the Fiesta ST (2018) uses a turbocharged 1.5 litre 3-cylinder EcoBoost engine, replacing a four-cylinder engine in this model.[25]

In October 2013, the PSA Peugeot Citroën group inaugurated the production line of their new turbocharged three-cylinder 1.2-litre petrol engine, in Douvrin, France. The engine, branded EB Turbo PureTech, will be first fitted on the Citroën C4 and the Peugeot 308, in the first half of 2014.[26]

The BMW B38 is a DOHC 1.5 litre 3 cylinder turbocharged petrol engine. The B38 is the first use of BMW's modular engine strategy for gasoline and diesel engines, all using the same bore spacing, and all producible on the same assembly line equipment. This engine was first used in the 2013 BMW i8 and 2014 Mini Hatch - replacing the previous four-cylinder engine in the Mini - and is currently used in the BMW F40 118i, BMW F22 218i, BMW X1 sDrive18i, BMW X2 sDrive18i. It was previously used in the BMW F20 118i and BMW F30 318i. 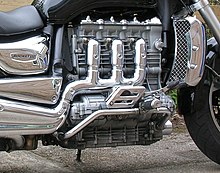 For motorcycles, the inline three-cylinder engine is considered advantageous as it is narrower than an inline-four and produces less vibration than a twin cylinder vehicle.[29]

When BMW first moved to watercooled engines they first released the K100 I4 closely followed by the K75 with a 3 in line engine. the K75 was very popular due to the lower weight and the good torque range provided by the 3 cylinder engine. 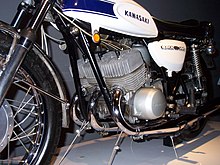 Following a comparative study at Osaka University's Faculty of Engineering, between in-line and L-shaped motors, Kawasaki Motors decided to develop a range of high performance, two stroke straight-three engines.[36] Between 1969 and 1978, the company produced air-cooled inline, triple engines with capacities of 250 cc, 350 cc, 400 cc, 500 cc, and 750 cc,[37] and the H1-R 500cc and H2-R or KR750 750 cc racing models in both air-cooled and water-cooled forms.[38]

Inline three-cylinder engines are not limited to propelling motor vehicles. They may also be used in general industrial applications. An example is the Fairbanks-Morse 32E14 slow-speed diesel engine which is shown coupled to a water pump.

Inline three engines are common in diesel engined tractors, as well as other agricultural machinery. Nearly all manufacturers of diesel tractors have had models with three-cylinder engines. Perhaps the best known example of any kind of three-cylinder diesel engine is the Perkins AD3.152 that was used in Massey Ferguson 35 tractors, as well as in Fordson Dexta and several other tractors. This engine was also used for marine and stationary applications. Other manufacturers include Nuffield(BMC), Bolinder-Munktell/Volvo BM, International Harvester, John Deere, Deutz-Fahr, Kubota, Ford and many others.

The Hewland AE75 is a 750 cc lightweight two-stroke inverted three-cylinder liquid-cooled aircraft engine that produced 75 bhp (56 kW), manufactured in the mid-1980s by Hewland.[39]