Talladega Superspeedway, nicknamed “Dega”, and formerly named Alabama International Motor Speedway (AIMS), is a motorsports complex located north of Talladega, Alabama.[1] It is located on the former Anniston Air Force Base in the small city of Lincoln. A tri-oval, the track was constructed in 1969 by the International Speedway Corporation, a business controlled by the France Family. As of 2021, the track hosts the NASCAR Cup Series, NASCAR Xfinity Series, and NASCAR Camping World Truck Series. Talladega is the longest NASCAR oval, with a length of 2.66 miles (4.281 km), compared to the Daytona International Speedway, which is 2.5 miles (4.0 km) long. The total peak capacity of Talladega is around 175,000 spectators,[4][5][6] with the main grandstand capacity being about 80,000.[7] 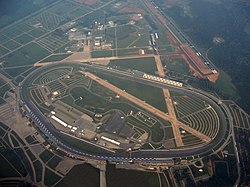 Aerial view of Talladega Superspeedway in 2007. The runways of the defunct Anniston Air Force Base are visible just to the south of the active Talladega Municipal Airport

During the 1960s, William "Bill" France, Sr. wanted to build a track faster and longer than his Daytona International Speedway. After failed attempts to reason with local government in Orange County, North Carolina, with the Occoneechee Speedway, he attempted to find a new spot for a race track and make his idea a reality. After failing to secure a location near the research triangle around Raleigh, France then looked around between Atlanta and Charlotte around Greenville, South Carolina to build the track as it would take away business from the tracks there. However Sunday blue laws prevented races from being held on Sundays in the state of South Carolina.(The Southern 500 was held on Labor Day itself back in the day), after failing to agree to terms with the government, France set his sights elsewhere. He then looked between Atlanta and Birmingham along Interstate 20. With the support of Gov. George Wallace, France broke ground on an old airfield 47 miles east of Birmingham and 100 miles west of Atlanta on May 23, 1968. The track opened on September 13, 1969, at a cost of $4 million. The track was named the "Alabama International Motor Speedway". The name would remain for twenty years until 1989, when the facility's name was changed to "Talladega Superspeedway".[8]

In the first race at the track, all the original drivers aside from Bobby Isaac, Richard Brickhouse, Jim Vandiver abandoned the track due to tire problems, which forced France to hire substitute drivers, the winner being Brickhouse. After the first race, Talladega hosted two Cup Series races a year, one of which would become part of the 10-race NASCAR Cup Series playoff format.

Since its opening year, Talladega has hosted many races and has been repaved four times. Talladega has also had many first-time winners, such as Richard Brickhouse, Ron Bouchard, Bobby Hillin Jr, Davey Allison, Brian Vickers, Brad Keselowski, Ricky Stenhouse Jr and Bubba Wallace .[9] 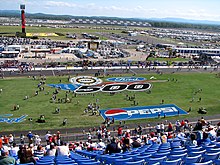 Talladega Superspeedway after the repaving of the track.

In May 2006, Talladega started to re-surface the track and the apron. Construction started on May 1 and lasted until September 18. The first race on the resurfaced race track was a NASCAR Craftsman Truck Series race on October 7.[12]

Main article: The Big One (motorsport)

In May 1987, Bobby Allison, after contacting debris from a blown engine, cut his right-rear tire while going through the tri-oval section of the track. The car was vaulted airborne. His car damaged a section of the frontstretch catch fence, but did not enter the spectator area. NASCAR imposed rule changes to slow the cars after the incident, with a 1988 rule requiring cars running there and at Daytona to again use restrictor plates. The most often cited reason is a fear that the increasing speeds were exceeding the capabilities of the tires available at the time, as high-speed tire failure had led to some terrific crashes at slightly lower speeds. The plates limit the amount of air and fuel entering the intake manifolds of the engine, greatly reducing the power of the cars and hence their speed. Similarly to restrictor plates, NASCAR changed the package for Daytona and Talladega to use tapered spacers, which are larger throttle bodies compared to the plates, and restrict less airflow, allowing larger horsepower, increased closing rates, and slightly higher speeds. This has led to an extremely competitive style of racing at Talladega and Daytona. Allison's crash was very similar to Carl Edwards's airborne crash at the 2009 Aaron's 499.

The reduced power affects not only the maximum speed reached by the cars but the time it takes them to achieve their full speed as well, which can be nearly one full circuit of the track. The racing currently[when?] seen at Talladega is extremely tight, often in rows of three or four cars, and sometimes even five lanes wide on the straightaways throughout most of the field, as the track is wide enough to permit such racing. Breaking away from the pack is very difficult as well.

Such close quarters, however, makes it extremely difficult for a driver to avoid an incident as it is unfolding in front of them, and the slightest mistake can lead to a multi-car accident dubbed "the Big One" by fans and drivers. It is uncommon, but possible, to see 20 or more cars collected in the crashes. Occasionally, cars go airborne and barrel-roll or slide on their roofs, although NASCAR has made several advances in safety over the years to lessen the chance of a car going airborne.

Numerous strange occurrences at the track have led to rumors of Talladega being cursed. Stories of the origin of the curse vary. Some claim that a local Native American tribe held horse races in the valley where the track currently resides where a chief was killed when he was thrown from his horse. Others say that the site of the superspeedway was once an Indian burial ground. Still another version says that after the local tribe was driven out by the Creek nation for their collaborating with the forces of Andrew Jackson, a shaman put a curse on the valley.[17]

Since the construction of the track, many unusual events and untimely deaths have fueled the rumors of a jinx or curse. In the 1973 Talladega 500, NASCAR Rookie of the Year Larry Smith died of massive head injuries in a solo crash, one that was reported by commentators as a heavy hit, but believed by no means bad enough to be fatal.[18] Later in the same race, driver Bobby Isaac parked his car and announced he was quitting racing; he did not participate in another 1973 race. Isaac explained, "Something told me to quit. I don't know anything else to do but abide by it."[19] At the time of Isaac's death in 1977, friend and colleague Ned Jarrett told reporters that the reason Isaac parked his car in Talladega was because he "had heard a voice that told him to quit".[20]

During the 1974 Winston 500, Penske Racing crewman Don Miller lost part of his leg in a pit lane accident. Miller was helping service his team's AMC Matador, driven by Gary Bettenhausen. The car was hit by another driver in pit lane, pinning Miller between the pit wall and Bettenhausen's car. In the a few months later, ten of the top eleven qualifying drivers found that their cars had been mechanically—and elaborately—sabotaged the night before the race. While the majority of the damage was quietly repaired before the race, the culprit was never found.[17][21]

In the 1975 Winston 500, Randy Owens, brother-in-law of Richard Petty and a crew member on the family team Petty Princely Pie Enterprises (father of current NASCAR Cup Series crew chief Trent Owens), was killed by an air tank that exploded in the pits.[22]

To some, Bobby Allison's wreck in 1987 described above was yet another reminder of the curse. In 1993, his son, Davey Allison, died in a helicopter crash in the infield of Talladega.[17]

The Legend of Hallowdega, a comedic short film about the Talladega jinx, was directed by Terry Gilliam and released in 2010.