ZAP Power Systems (for zero air pollution), was launched by Jim McGreen in 1992 with the goal of designing, building and selling innovative electric vehicles. The company was incorporated on September 23, 1994 as ZAP Power Systems[2] of Sebastopol, California, by McGreen, Gary Starr where they started manufacturing electric powered kits and bikes and then later the zappy scooter.[3] In 1993 Automotive News named Starr among the top ten authorities in the electric car industry.[4] He had previous experience with electric cars, including his work at Solar Electric Engineering[5] and U.S. Electricar, which converted hundreds of vehicles including trucks for Ford and General Motors and is currently known as Enova Systems.[6] Starr was involved in electric conversion projects, various production cars and kit cars.[7]

1998 – First electric bike store opened in San Francisco.[20] Starr and ZAP was honored with CALSTART's 1998 Blue Sky Merit Award. CALSTART,"Gary Starr has probably been responsible for the marketing of more EVs than anyone I can think of," said CALSTART CEO Mike Gage. "Responsible for more than 20 thousand, I think that is more than all the tier one automakers." [21]

2000 – Introduced a line of sea scooters with battery-powered propulsion,[28] and the KICK-PUSH Scooter.[29] Management additions,[30] as a result of the acquisition in 1999 of EMB.

March 2001, strategic alliance with Sun Pirate,[34] in May formed a joint venture with to develop, design, manufacture and distribute full line of electric vehicles.[35]

July 2010, Confirmed an agreement to acquire a stake in Zhejiang Jonway Automobile.[38][39] Approval confirmed by Chinese Department of Commerce in Zhejiang Province in September 2010.[40]

The company operates a retail car lot for sales of its automotive product line which includes the and , two low-speed vehicles for the fleet market, the ZAP Xebra Truck and Sedan, also develops and commercializes electric power-assist system motor kits for bicycles, as well as electric bicycles, electric ATVs and personal electric scooters.

This division is focused on Portable Energy (batteries), the company through the Recharge-It-All line sells battery packs to power or charge a range of mobile electronics such as cellular phones, digital cameras and laptops, providing significantly more charge time than available technologies.[44] The Portable Energy devices fall under two product lines. It includes the universal chargers and iPOD models and the iPhone.[45] The universal chargers are rechargeable that extend the use of small and medium-sized electronic devices up to two to five times their normal battery life. 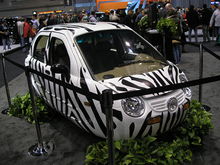 The ZAP Xebra[47] was a three-wheeled all-electric city car capable of 40 mph (64 km/h), charges off of a 110 volt outlet. Serves Domino's Pizza delivery service in Las Vegas,[48] Aspen[49] in the US, Coca-Cola distribution model in Montevideo, Uruguay and includes an adapted version: The Xebra Truck.[50] The United Parcel Service (UPS) in Northern California combines a fleet of Xebra trucks and sedans to expand small parcel deliveries, after UPS delivery vans transfer smaller packages to locked storage unit, an electric Xebra car/truck transports packages into dense urban and residential areas where parking and traffic are easier for the smaller vehicles.[51] After several hundred vehicles produced, the production of this vehicle have been phased out since 2009.[52]

According to a July 31, 2008, editorial in Wired Magazine, motorists in Massachusetts are unable to register the ZAP Xebra legally, because the vehicle doesn't fit the state's definition of either a car or a motorcycle. Registrants of ZAP Xebras received letters from the state's Registry of Motor Vehicles stating that their vehicle registration plates had been revoked and their registrations were invalid.[53]

Both the United States House of Representatives and United States Senate found it as an nihilism, when they passed the legislation on December 31, allowing three-wheeled motor vehicles in Boston roads. The change was achieved through joint efforts by the Registry of Motor Vehicles, state Senator Robert L. Hedlund, a Weymouth Republican, and state Representative Garrett J. Bradley, a Hingham Democrat.[54]

The electric four-wheeled all-terrain vehicle ZAP Dude ATV, designed for installation security patrols and maintenance functions, can go up to 25 mph (40 km/h) and has a range of 25 miles (40 km) with a 48 volt permanent-magnet brush DC motor and standard 65 amp hour absorbed glass mat (AGM) lead acid batteries,[55] fact that sacrifices charging time to 4 to 6 hours and the continuous power to 4 kW, both indicators improvable with a lithium battery technology. Is the cheapest in the company's electric vehicle portfolio, been introduced to natural reserve patrols, US Military[56] and agriculture and farming markets,[57] where usage is scheduled and power stations are strategically located.

The ZAPTRUCK XL classifies as a Zero Emission Vehicle(ZEV), with an off-road payload up to 1,900 lb (860 kg) and a convertible truck bed, have served a small contractor company from California, Ghilotti Construction Co., to move parts off site,[59] UPS delivery services have also add the four-wheeled vehicle mostly to its Bay Area parcel fleet needs,[60][61] the Federal Aviation Administration (FAA) have added the vehicle to their transportation operating mode.[62] The U.S. Military has been putting the vehicle to test by engaging them into logistics tasks since 2009.[63]

The ZAP-X is an electric crossover SUV previously expected to be launched in 2008 by ZAP and Lotus Engineering based on the Lotus APX prototype platform.[64] The claimed potential performance was a total of 644 bhp (480 kW; 653 PS) from four in-wheel electric motors, a 350-mile (560 km) single-charge range, 155 mph (249 km/h) top speed, 0 to 60 mph (97 km/h) acceleration in 4.8 seconds and a 10-minute recharge time, with an estimated production cost of over $395 million together with the Alias.[65] This product have not been offered for sale to the public.

ZAP is developing the , an all-electric family SUV, tested at the Korea Electric Vehicle Challenge from March to early April,[66] an on-road multistage demonstration event of three rest and recharge stops that includes a 220 km freeway rally at average speeds of 80–85 km/h(52.8 mph).[67] Vehicle presented ahead of the Beijing International Automotive Exhibition by the CEO of ZAP, Steve Schneider, as the company latest effort.[68] The model also available with a fuel efficient engine based on Jonway's A380 platform,.[69]

The ZAP Alias Roadster is a plug-in electric three-wheeled sports car from the American electric car maker ZAP that was originally scheduled to go into production in 2009, with two wheels at the front, each containing an electric wheel-motor, and one at the rear, the project initiated in 2007 through a collaboration between ZAP and Lotus Engineering, the UK-based automotive engineering company, who are assisting with the development of the vehicle.[70] Was supposed to have gone into production in 2009.[71] The performance announced in 2008, was 0-60 mph (97 km/h) mph in 5.7 seconds, with a top speed of 156 mph (251 km/h) mph and a range of 100 miles (160 km).[70] The vehicle was a finalist at the 2010 Progressive Insurance X Prize[72] driven by Al Unser Jr., but was eliminated due to mechanical failure in the 97th mile of a 100-mile track event.[73][74]

ZAP has had a history of production delays. While the company sold the low-end Xebra for a number of years, more expensive, higher-performance models had been announced and prototyped but not produced, due to lack of adequate funding.

An article in an issue of Wired alleged that "ZAP has taken millions from investors and dealers eager to see the company's line of green cars hit the road. But that line has never materialized." The article alleges that board members issued themselves large amounts of company stock and warrants and made misleading claims about the company's prospects, allowing them to enrich themselves at the expense of dealers who bought franchises and did not receive the cars that they were expecting to sell, although no false claims were ever verified. While the company sold the low-end Xebra for a number of years, more expensive, higher-performance models have been repeatedly announced but not produced. [75] An article from Forbes magazine in June 2007 criticizes the company for over-issuing stock and failing to produce results or show significant profits.[76]

ZAP did reportedly become the first company in the USA to sell the micro Smart Car. According to greenchipstocks, In 2004 Daimler Chrysler abandoned their Smart Car division in the U.S., claiming there was not enough demand. In 2005, ZAP took the initiative and started Americanizing Smart Cars they purchased from European dealers. In doing so they secured orders totaling in $2.2 billion. [77]

In the case ZAP v. Daimler Chrysler AG, et al., Superior Court of California, County of Los Angeles, Case No. BC342211. On October 28, 2005, ZAP filed a complaint against Daimler Chrysler Corporation and others in the Los Angeles Superior Court. The complaint includes claims for intentional and negligent interference with prospective economic relations, trade libel, defamation, breach of contract - agreement to negotiate in good faith, breach of implied covenant of good faith and fair dealing, and unfair competition. The complaint alleges that Daimler Chrysler has engaged in a series of anti-competitive tactics aimed at defaming ZAP and disrupting its third-party business relationships. As a result of the allegations, the complaint requests damages in excess of $500 million per claim and such other relief as the court deems just and proper. [78]

ZAP sold shares and dealer franchises, partially based on its intention to sell and finance the retrofitting of the Smart Car to USA standards. The importation and conversion to meet US safety and EPA regulations was engineered and performed by G&K Automotive of Santa Ana, CA. Zap quoted mileage figures for the car as being the mid 40 range. This calculation was taken from UK test figures and was based on the larger(+20%) Imperial gallon. When tested by the EPA at their Ann Arbor lab, it was found that true mpg figures were in the low to mid 30s, but Daimler-Chrysler, the Smart car's manufacturer, said that ZAP's behavior revealed "both the sham nature of its purported business and a lack of trustworthiness that is nothing short of stunning." Although ZAP never claimed to have a deal with Daimler Chrysler directly, according to filed reports ZAP was the first company to import Smart cars to the US and did sell 300 Smart cars that it bought from independent Daimler-Chrysler distributors, it also filed suit against Daimler-Chrysler in California for libel and business interference. ZAP won the initial filings but Daimler won a later appeal based solely on jurisdiction.[79][80]

Plans to begin construction of a manufacturing plant in Franklin, Kentucky, were announced in late summer 2008, but construction plans were halted in November 2008.[81][82]

2001 – The SWIMMY was chosen as finalist for NASDAQ Sports Product of the Year in January, by .[84] ZAP held an international songwriting contest, "Pollution Solution", for Earth Day 2001, with a $5000 prize.[85] Unveiled the ZAPADAPT, an electric-assist for manual wheelchairs at the Abilities Expo.[86][87]

2010 – Engineering contract awarded for design and development of a version of the Grumman Long Life Vehicle,[88] the boxy truck used by postal delivery workers since 1987.

2010 – ZAP was the official sponsor of EV Korea 2010 along with Samyang Optics,[89] with support from the Korean Ministry of Knowledge Economy, Presidential Committee on Green Growth, Seoul Metropolitan Government, the Korea Transport Institute, Electronics and Telecommunications Research Institute, Korea Electronics Technology Institute Korea, Automotive Research Institute, Korea Electric Vehicle Industry Association and others. Event held concurrently with the New & Renewable Energy and Battery Expo 2010, with around 98 exhibitors and up to 25,000 attendees.[90]