The Austin 7 is an economy car that was produced from 1922 until 1939 in the United Kingdom by Austin. It was nicknamed the "Baby Austin" and was at that time one of the most popular cars produced for the British market and sold well abroad. Its effect on the British market was similar to that of the Model T Ford in the US, replacing most other British economy cars and cyclecars of the early 1920s.[1] It was also licensed and copied by companies all over the world.[2] The very first BMW car, the BMW Dixi, was a licensed Austin 7, as were the original American Austins. In France they were made and sold as Rosengarts. In Japan, Nissan also used the 7 design as the basis for their first cars, although not under licence.[2] This eventually led to a 1952 agreement for Nissan to build and sell Austins in Japan under the Austin name.

Many Austin 7s were rebuilt as "specials" after the Second World War,[3][4][5] including the first race car built by Bruce McLaren, and the first Lotus, the Mark I. 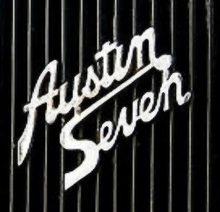 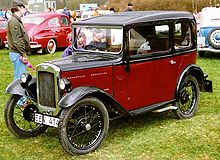 Until the First World War Austin built mainly large cars, but in 1909 they sold a single-cylinder small car built by Swift of Coventry called the Austin 7 hp.[7] After this they returned to bigger cars.

In 1920 Sir Herbert Austin commenced working on the concept of a smaller car, mainly to meet the needs of young families aspiring to own an affordable motor car. This idea was spurred on by the introduction of the Horsepower Tax in 1921. His design concept marked a departure from his company's conservative motoring past and Austin received considerable opposition from his board of directors and creditors. Because the company was in receivership Austin decided to carry out the project himself on his own account and in 1921 hired an 18-year-old draughtsman, Stanley Edge, from the Austin factory at Longbridge, Birmingham to aid in the drawing of detailed plans. This work was carried out in the billiard room of Austin's Lickey Grange home.

Edge convinced Austin to use a small four-cylinder engine. The original side valve engine design featured a capacity of 696cc (55mm x 77mm) giving a RAC rating of 7.2 hp, the cast cylinder block featured a detachable head and was mounted on an aluminium crankcase. The crankshaft used one roller and two ball bearings and the big-ends were splash lubricated.[8] Edge also carried out the design of other mechanical components such as the three speed gearbox and clutch assembly. Austin was largely responsible for styling the Seven's design, which was reportedly[citation needed] influenced by the design of the Peugeot Quadrilette. The "A" frame chassis design was believed to have been influenced by the design of an American truck used in the Longbridge factory in the early 1920s.

The design was completed in 1922 and three prototypes were constructed in a special area of the Longbridge factory, and announced to the public in July 1922.[8] Austin had put a large amount of his own money into the design and patented many of its innovations in his own name. In return for his investment he was paid a royalty of two guineas (£2, 2s), (£2.10) on every car sold.[2]

Nearly 2,500 cars were made in the first year of production (1923), not as many as hoped, but within a few years the "big car in miniature" had wiped out the cyclecar industry and transformed the fortunes of the Austin Motor Co. By 1939 when production finally ended, 290,000 cars and vans had been made.[8]

The Austin 7 was considerably smaller than the Ford Model T. The wheelbase was only 6 ft 3 inches (1.905 m), and the track only 40 inches (1.016 m). Equally it was lighter – less than half the Ford's weight at 794 pounds (360 kg). The engine required for adequate performance was therefore equally reduced and the 747 cc sidevalve was quite capable with a modest 10 hp output.

The chassis took the form of an "A" with the engine mounted between the channel sections at the narrow front end. The rear suspension was by quarter elliptic springs cantilevered from the rear of the chassis while at the front the beam axle had a centrally mounted half elliptic transverse spring.[8] Early cars did not have any shock absorbers. Brakes were on all wheels but at first the front brakes were operated by the handbrake and the rear by the footbrake, becoming fully coupled in 1930.

In late 1931 the chassis was lengthened by 6" with a corresponding increase in the rear track. Steering is by worm and wheel mechanism. 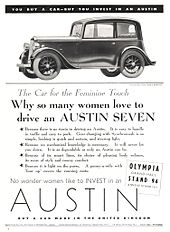 The big end bearings were lubricated by jets from an oil gallery in the crankcase, the oil striking the crankshaft webs which were drilled accordingly. Originally the journal diameter was 1.125"; this was later increased to 1.3125". The three bearing engine (from 1936) used a white metal centre bearing.

The splash-lubricated crankshaft (pressure fed on some sports models) at first ran in two bearings (two ball bearings at the front, roller at the back) changing to three in 1936.[8] An electric starter was fitted from November 1923. The early cars used magneto ignition, but this was changed to coil in 1928.

The 3-speed and reverse gearbox was bolted to the back of the engine and had a variety of ratios depending on the application: touring, sports, racing and trials. A four-speed gearbox was introduced in 1932 and in 1933 synchromesh was added to third and top ratios extending to second gear in 1934.[8]

The back axle was of spiral bevel type with ratios between 4.4:1 and 5.6:1 with 4.9 ; 1 being the most common until the 1930s. A short torque tube ran forward from the differential housing to a bearing and bracket on the rear axle cross member. 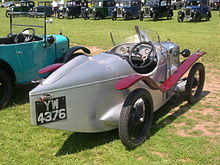 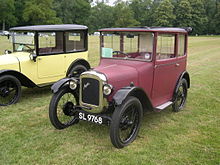 Herbert Austin's son-in-law, Arthur Waite, soon began to achieve remarkable sporting successes beginning at Brooklands in March 1923 and the next month at Monza. Another driver, E C Gordon England, persuaded Sir Herbert to provide him with a racing 7. Waite and Lou Kings (chief tester) then experienced a run of failure brought about by inadequate engine lubrication for racing conditions. Meanwhile, Gordon England flushed with success from establishing six new class records at Brooklands, had built a special lightweight 2-seater body weighing just 20 lb (9.1 kg) and entered it in the 1100 cc class for the Junior Car Club 200 mile race at Brooklands in October 1923. There Gordon England finished in second place and during the race won another five class records.[9]

The first Austin 7 saloon was made by racing driver E C Gordon England's coachbuilding company. Gordon England had been an aircraft designer with the Bristol Aeroplane Company. His little fabric saloon body based on aircraft principles was said to be the smallest closed car in the world. Its body weighed 28 lb (13 kg) less than the tourer and at £210, almost double the £112 chassis price, it showed there would be a ready sale for an Austin-made steel panelled saloon which was introduced in September 1926 at £165[9] (equivalent to £9647 today)

Until fabric bodies fell from fashion in the early 1930s the Gordon England Fabric "de luxe" Saloon remained in Austin's catalogue at a £20 (14%) premium over Austin's standard steel saloon. It was accompanied by their 2-seater Gordon England Cup Model.[10] 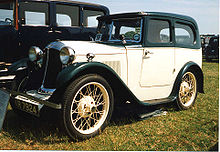 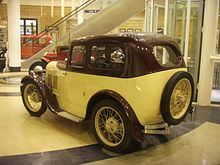 In 1927, William Lyons, co-founder of the Swallow Sidecar Company, saw the commercial potential of producing a re-bodied Austin 7. Buying a chassis from dealer Parkers of Bolton Lyons commissioned Swallow's talented employee, coachbuilder Cyril Holland, to produce a distinctive open tourer: the Austin Seven Swallow. Holland (1895- ) who joined Swallow in late 1926 had served his apprenticeship with Lanchester and would become chief body engineer.[11][12] The height of saloon car fashion of the day was to have the back of the body fully rounded, this was called "dome" shaped.

With its bright two-tone colour scheme and a style befitting more expensive cars of the time, together with its low cost (£175), the Swallow proved popular and was followed in 1928 by a saloon version: the Austin Seven Swallow Saloon.

Approximately 3,500 bodies of various styles were produced up until 1932, when Lyons started making complete cars under the SS brand.

Such was the demand for the Austin Seven Swallows that Lyons was forced to move in 1928 from Blackpool to new premises in Coventry. It was, in part, the success of the Swallows that laid the foundations of what was to become, by 1945, Jaguar Cars.[13][14]

Versions of the Austin 7 were made under licence by American Austin from 1930, Dixi (later bought by BMW) in Germany from 1927 and Rosengart in France from 1928. Austin 7s were also manufactured by Nissan (Datsun) but reports differ as to whether these were built under licence or were unlicensed copies.[citation needed] In addition, rolling chassis were exported to Australia to have locally made bodies attached.

The American Austin Car Company was founded in 1929, in Butler, Pennsylvania, in premises that had belonged to the Standard Steel Car Company.[7] Their intention was to assemble and sell in the United States a version of the Austin 7 car, called American Austin.[15] After some initial success the Great Depression set in, and sales fell off to the point that production was suspended. In 1934 the company filed for bankruptcy.

In the aftermath of World War I the Australian Government imposed a tariff on imported vehicles, with tax concessions applying to rolling chassis, as a stimulus to develop a sovereign motor vehicle industry. The chassis concession acted as a financial incentive for local coach-builders to import factory built rolling chassis, and fit uniquely Australian designed and built bodies, leading to the establishment of an Australian motor vehicle bodybuilding industry in the early 1920s. 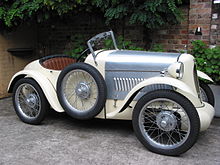 In 2007, during an episode of Top Gear, Jeremy Clarkson and James May studied a number of early car designs (including the Ford Model T and the De Dion-Bouton Model Q) and concluded that the Austin Seven was the first mass-market car to be fitted with a "conventional" control layout, as found on modern cars (although the earliest car they found to use this layout was a Cadillac Type 53 in 1916). 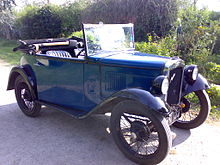 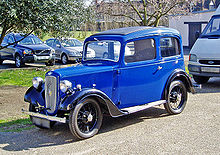 The Ulster gained its name from a strong performance in the 1929 RAC Tourist Trophy held at the Ards circuit in County Down, where Archie Frazer-Nash finished third and S. V. Holbrook finished fourth.