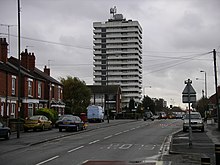 Longfield House is a 16-story block of flats about 51 m tall situated on Bell Green Road, Courthouse Green. It was completed in 1967, and contains 129 flats.[2]

Shopping and Park and Ride

Courthouse Green is home to a Sainsbury's superstore, pharmacy, bank, and petrol station, and a number of fast food outlets, a gym, a warehouse and a home improvement store which are adjacent to the A444 road, in addition the Gallagher Retail Park is on the opposite side of the A444. Also the Coventry Park and Ride North, funded by Centro and operated by Central Connect under contract, is located in Courthouse Green opposite the Sainsbury's store. This service won a sixth month reprieve after being under threat of withdrawal in March 2009 due to low passenger usage.

Morris Engines purchased a 45-acre (180,000 m2) site at Courthouse Green in 1927. During the mid-1930s, new buildings were erected. During the late 1930s, the Courthouse Green factory was turning out over 3,000 power units per week and throughout World War II, it was working flat-out making engines for fire pumps, ambulances, military vehicles, lifeboats and tanks, as well as making component parts for aero engines and for Rotol variable pitch air screws. During the 1960s the Cooper S variants of the BMC A-Series engine were developed and produced at the Courthouse Green plant.[3]