William Richard Morris, 1st Viscount Nuffield, GBE, CH, FRS (10 October 1877 – 22 August 1963) was an English motor manufacturer and philanthropist. He was the founder of Morris Motors Limited and is remembered as the founder of the Nuffield Foundation, the Nuffield Trust and Nuffield College, Oxford, as well as being involved in his role as President of BUPA in creating what is now Nuffield Health. He took his title from the village of Nuffield in Oxfordshire, where he lived.

Morris was born in 1877 at 47 Comer Gardens, a terraced house in the Comer Gardens area of Worcester, about 2 miles (3 km) northwest of the centre of Worcester, England. He was the son of Frederick Morris and his wife Emily Ann, daughter of Richard Pether.[1] When he was three years old his family moved to 16 James Street, Oxford.[2] 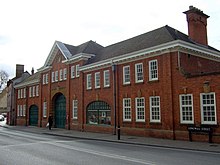 The Morris Garage
Morris's 1910 building on his site in Longwall Street, Oxford

Upon leaving school at the age of 15 Morris was apprenticed to a local bicycle-seller and repairer. Nine months later, after his employer refused him a pay increase, aged 16 he set up a business repairing bicycles in a shed at the back of his parents' house. This business being a success he opened a shop at 48 High Street and began to assemble as well as repair bicycles, labelling his product with a gilt cycle wheel and The Morris. Morris raced his own machines competing as far away as south London. He did not confine himself to one distance or time and at one point was champion of Oxford (City and County), Berkshire and Buckinghamshire for distances varying between one and fifty miles.[3]

He began to work with motorcycles in 1901, designing the Morris Motor Cycle, and in 1902 acquired buildings in Longwall Street from which he repaired bicycles, operated a taxi service, sold, repaired and hired cars. He held the agency for Arrol-Johnston, Belsize, Humber, Hupmobile, Singer, Standard and Wolseley cars. In 1910 he built new premises in Longwall Street—described by a local newspaper as The Oxford Motor Palace—changed his business's name from The Oxford Garage to The Morris Garage and still had to take more premises in Queen Street.[3] The Longwall Street site was redeveloped in 1980, retaining the original frontage, and is now used as student accommodation by New College.[4] 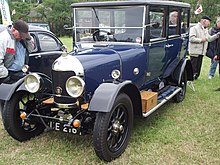 In 1912 he designed a car, the "bullnose" Morris and using bought-in components (including engines and axles from USA) began to build them at a disused military training college in Cowley, Oxford. The outbreak of World War I saw the nascent car factory largely given over to the production of munitions—including 50,000 minesinkers for the North Sea Minefield—but in 1919 car production revived rising from 400 cars in that year to 56,000 in 1925. Morris pioneered the introduction to the United Kingdom of Henry Ford's techniques of mass production. During the period 1919–1925 he built or purchased factories at Abingdon, Birmingham and Swindon to add to those in Oxford.

In February 1927, in competition against—amongst others—its creator, Herbert Austin, Morris paid £730,000 for the assets of the collapsed Wolseley Motors Limited which became his personal property. Wolseley were at this stage in fairly advanced development of an overhead camshaft 8 hp car, which he launched as the first Morris Minor in 1928. The original MG Midget, launched in 1929, was based on the Minor.

When major component suppliers had difficulties he purchased them on his own account. His American engines were now made under licence for him by Hotchkiss in Coventry. When in 1923 they were unwilling to expand production Morris bought their business and called it Morris Engines Limited. It would become Morris engines branch when he later sold it to Morris Motors. Again when back-axle manufacturer E. G. Wrigley and Company ran into financial difficulties he bought and reconstituted it as Morris Commercial Cars Limited to manufacture an expanded truck and bus offering. Following the same policy he bought the manufacturer of SU Carburettors in 1926.

Impressed by American all-steel bodies he persuaded Edward G Budd of Budd Corporation to enter a joint venture with him called Pressed Steel Company which erected their large factory at Cowley opposite Morris's own and with a connecting bridge in 1926. But the two business tycoons had each met their match. Eventually in 1930 the High Court ended their disagreements by obliging Morris to surrender his and his colleagues' membership of the Pressed Steel board and all Morris holdings and Morris lost all the capital he had invested in the venture.

Morris was "the most famous industrialist of his age".[5] On New Year's Day 1938 he was ennobled as Viscount Nuffield.[6] In September 1938 he bought the bankrupt Riley (Coventry) and Autovia companies from the Riley family[7] selling them to Morris Motors Limited. He had added another personal investment, Wolseley Motors Limited, to the portfolio of Morris Motors Limited in 1935.[8] After he was ennobled as Baron Nuffield instead of the Morris Organization the whole gallery of all his personal enterprises were promoted as the Nuffield Organization. There was no legal substance to either of these groupings.

The Supermarine Spitfire was a technically advanced aircraft. Though ordered by the Air Ministry in March 1936 by early 1938 no single plane had been made. Lord Nuffield had offered his own expertise, and that of his Morris Organization, to design and construct a vast new factory at Castle Bromwich, to his own ideas of industrial planning, claiming he would build four times as many planes there as any other factory in the country. Although the Treasury initially opposed the idea,[9] having concerns about his control over the design of the project and its costs, the huge "Nuffield Project" was approved at a cost of £1.125 million by the Air Secretary and Morris, now Nuffield, placed in charge of it. Within a year, with the factory still not built, the costs had increased to £4.15 million mainly due to constant changes in site layout and design. Nuffield had claimed he could produce 60 Spitfires a week but by May 1940, the height of the Battle of France, not one Spitfire had been built at Castle Bromwich. That month Lord Beaverbrook was placed in charge of all aircraft production, Nuffield was sacked and the plant handed over to Vickers, Supermarine's parent company.[10] Vickers had inherited such a confused construction programme that even by 1942 building work was still going on and the project's accounts were not finally signed off by the Treasury until March 1944.[11] As early as 1942, cracks in the brickwork of the principal building were discovered by Vickers, due to differential expansion of the various types of bricks used in the different stages of construction. Possibly as a result of this debacle, in 1941 Nuffield invited Mrs Dorothée Martin (Dorothée Pullinger) to join his organisation to advise him on his war work.[12]

Morris Motors Limited merged with Austin Motor Company in 1952 in the new holding company, British Motor Corporation (BMC), of which Nuffield was chairman for its first year.[13]

Morris retired as a director of BMC on 17 December 1952 at the age of 75, taking on the title of honorary president instead. He was succeeded as chairman by Leonard Lord.[14] As honorary president, he attended his office regularly and advised his colleagues.[1] 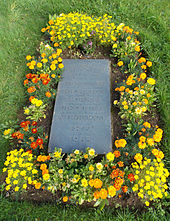 Morris married Elizabeth Anstey on 9 April 1903—they had no children, and he disbursed a large part of his fortune to charitable causes.

In 1937 he gave £50,000 to fund the expansion of the Sea Cadet Corps. In 1937 Lord Nuffield donated £60,000 to the University of Birmingham for the Nuffield building, to house a cyclotron.[21] In December 1938 he offered to give an iron lung (see Both respirator) made in his factory to any hospital in Britain and the Empire that requested one; over 1,700 were distributed. He also founded the Nuffield Foundation in 1943 with an endowment of £10 million in order to advance education and social welfare.

He also founded Nuffield College, Oxford in 1937, a post-graduate college and the University's first co-educational college.

He is also commemorated in the Morris Motors Museum at the Oxford Bus Museum. Morris also has a building named after him at Coventry University, at Guy's Hospital London and a theatre at the University of Southampton.[27] The Lady Nuffield Care Home in North Oxford is named after his wife.

His home in James Street now has a blue plaque.[28] He died in August 1963, aged 85. The baronetcy and two peerages died with him as he was childless. He was cremated, and his ashes lie in Nuffield churchyard, beside his wife's.[29] 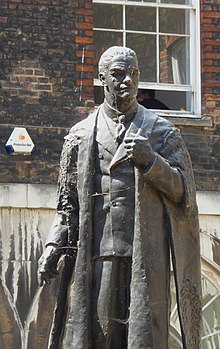 Statue of the Viscount in Guy's Hospital

In May 1938 a serial blackmailer, Patrick Tuellman, tried to kidnap Morris for a £100,000 ransom. But Tuellman had an accomplice who betrayed his plan to Oxford City Police.[30] The force briefed Morris and planned to catch Tuellman in the attempt. Morris took a keen interest in the preparations and insisted on attending every meeting.[31]

On 28 May police ambushed Tuellman in Cowley in his car. Officers found him to be in possession of two automatic pistols, ammunition and items of disguise. Birmingham Assizes tried Tuellman and on 22 July convicted him. He served seven years' penal servitude.[31]