For other uses, see Crosstalk (disambiguation).
Not to be confused with Spill (audio).

Every electrical signal is associated with a varying field, whether electrical, magnetic or traveling. Where these fields overlap, they interfere with each other's signals. This electromagnetic interference creates crosstalk. For example, if two wires next to each other carry different signals, the currents in them will create magnetic fields that will induce a smaller signal in the neighboring wire.

Near-end crosstalk (NEXT)
NEXT is a measure of the ability of a cable to reject crosstalk, so the higher the NEXT value, the greater the rejection of crosstalk at the local connection. It is referred to as near end because the interference between the two signals in the cable is measured at the same end of the cable as the interfering transmitter. The NEXT value for a given cable type is generally expressed in decibels per feet or decibels per 1000 feet and varies with the frequency of transmission. General specifications for cabling (such as CAT 5) usually include the minimum NEXT values.[3]

Power sum near-end crosstalk (PSNEXT)
PSNEXT is a NEXT measurement which includes the sum of crosstalk contributions from all adjacent pairs as an algebraic sum of the NEXT of the three wire pairs as they affect the fourth pair in a four-pair cable (e.g., Category 6 cable).[3] The Superior Modular Products White paper[4] states that the testing process for PSNEXT consists of measuring all pair-to-pair crosstalk combinations and then summing all of the values for each pair. The specification was developed to directly address the effect of transmissions on multiple adjacent pairs on the pair being tested and is relevant to all connecting hardware and associated communications cables.

Far-end crosstalk (FEXT)
FEXT measures the interference between two pairs of a cable measured at the far end of the cable with respect to the interfering transmitter.[3]

Alien crosstalk (AXT)
AXT is interference caused by other cables routed close to the cable of interest as opposed to signals contained in the same cable.[5] 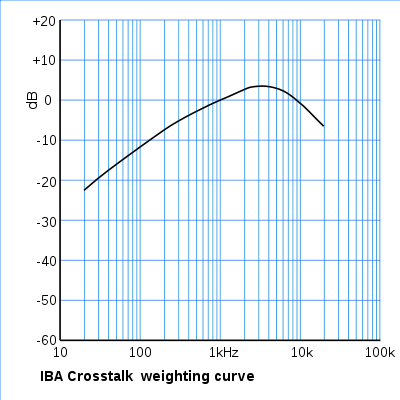 In stereo audio reproduction, crosstalk can refer to signal leakage across from one program channel to another, reducing channel separation and stereo imaging. Crosstalk between channels in mixing consoles, and between studio feeds is a much more noticeable problem, as these are likely to be carrying very different programs or material.

Crosstalk is an electrical effect and can be quantified with a crosstalk measurement. Crosstalk measurements are made on audio systems to determine the amount of signal leaking across from one channel to another. The Independent Broadcasting Authority published a weighting curve for use in crosstalk measurement that gives due emphasis to the subjective audibility of different frequencies. In the absence of any international standards, this is still in use despite the demise of the IBA.[citation needed]

Good crosstalk performance for a stereo system is not difficult to achieve in today's digital audio systems, though it is hard to keep below the desired figure of -30 dB[citation needed] or so on vinyl recordings and FM radio.

In telecommunication or telephony, crosstalk is often distinguishable as pieces of speech or in-band signaling tones leaking from other people's connections.[6] If the connection is analog, twisted pair cabling can often be used to reduce crosstalk. Alternatively, the signals can be converted to digital form, which is typically less susceptible to crosstalk.

In integrated circuit design, crosstalk normally refers to a signal affecting another nearby signal. Usually, the coupling is capacitive, and to the nearest neighbor, but other forms of coupling and effects on signal further away are sometimes important, especially in analog designs. See signal integrity for tools used to measure and prevent this problem, and substrate coupling for a discussion of crosstalk conveyed through the integrated circuit substrate. There are a wide variety of repair solutions, with increased spacing, wire re-ordering, and shielding being the most common.

In full-field optical coherence tomography, "crosstalk" refers to the phenomenon that due to highly scattering objects, multiple scattered photons reach the image plane and generate coherent signal after traveling a pathlength that matches that of the sample depth within a coherence length.

In stereoscopic 3D displays, crosstalk refers to the incomplete isolation of the left and right image channels so that one bleeds into the other - like a double exposure, which produces a ghosting effect.