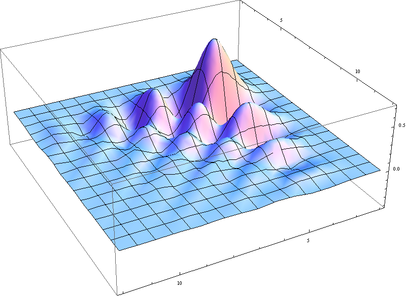 The Daubechies wavelets, based on the work of Ingrid Daubechies, are a family of orthogonal wavelets defining a discrete wavelet transform and characterized by a maximal number of vanishing moments for some given support. With each wavelet type of this class, there is a scaling function (called the father wavelet) which generates an orthogonal multiresolution analysis.

In general the Daubechies wavelets are chosen to have the highest number A of vanishing moments, (this does not imply the best smoothness) for given support width (number of coefficients) 2A.[1] There are two naming schemes in use, DN using the length or number of taps, and dbA referring to the number of vanishing moments. So D4 and db2 are the same wavelet transform.

Among the 2A−1 possible solutions of the algebraic equations for the moment and orthogonality conditions, the one is chosen whose scaling filter has extremal phase. The wavelet transform is also easy to put into practice using the fast wavelet transform. Daubechies wavelets are widely used in solving a broad range of problems, e.g. self-similarity properties of a signal or fractal problems, signal discontinuities, etc.

The Daubechies wavelets are not defined in terms of the resulting scaling and wavelet functions; in fact, they are not possible to write down in closed form. The graphs below are generated using the cascade algorithm, a numeric technique consisting of inverse-transforming [1 0 0 0 0 ... ] an appropriate number of times.

Note that the spectra shown here are not the frequency response of the high and low pass filters, but rather the amplitudes of the continuous Fourier transforms of the scaling (blue) and wavelet (red) functions.

Daubechies orthogonal wavelets D2–D20 resp. db1–db10 are commonly used. The index number refers to the number N of coefficients. Each wavelet has a number of zero moments or vanishing moments equal to half the number of coefficients. For example, D2 has one vanishing moment, D4 has two, etc. A vanishing moment limits the wavelets ability to represent polynomial behaviour or information in a signal. For example, D2, with one vanishing moment, easily encodes polynomials of one coefficient, or constant signal components. D4 encodes polynomials with two coefficients, i.e. constant and linear signal components; and D6 encodes 3-polynomials, i.e. constant, linear and quadratic signal components. This ability to encode signals is nonetheless subject to the phenomenon of scale leakage, and the lack of shift-invariance, which raise from the discrete shifting operation (below) during application of the transform. Sub-sequences which represent linear, quadratic (for example) signal components are treated differently by the transform depending on whether the points align with even- or odd-numbered locations in the sequence. The lack of the important property of shift-invariance, has led to the development of several different versions of a shift-invariant (discrete) wavelet transform.

Both the scaling sequence (low-pass filter) and the wavelet sequence (band-pass filter) (see orthogonal wavelet for details of this construction) will here be normalized to have sum equal 2 and sum of squares equal 2. In some applications, they are normalised to have sum

, so that both sequences and all shifts of them by an even number of coefficients are orthonormal to each other.

Using the general representation for a scaling sequence of an orthogonal discrete wavelet transform with approximation order A,

generating all symmetric sequences and

Equation (*) has one minimal solution for each A, which can be obtained by division in the ring of truncated power series in X,

Obviously, this has positive values on (0,2).

with R some polynomial with real coefficients. That the sum

maximizing r results in a linear program with infinitely many inequality conditions.

Each linear factor represents a Laurent-polynomial

that can be factored into two linear factors. One can assign either one of the two linear factors to p(Z), thus one obtains 2N possible solutions. For extremal phase one chooses the one that has all complex roots of p(Z) inside or on the unit circle and is thus real.

For Daubechies wavelet transform, a pair of linear filters is used. Each filter of the pair should be a quadrature mirror filter. Solving the coefficient of the linear filter

using the quadrature mirror filter property results in the following solution for the coefficient values for filter of order 4.

Parts of the construction are also used to derive the biorthogonal Cohen–Daubechies–Feauveau wavelets (CDFs).

While software such as Mathematica supports Daubechies wavelets directly[2] a basic implementation is possible in MATLAB (in this case, Daubechies 4). This implementation uses periodization to handle the problem of finite length signals. Other, more sophisticated methods are available, but often it is not necessary to use these as it only affects the very ends of the transformed signal. The periodization is accomplished in the forward transform directly in MATLAB vector notation, and the inverse transform by using the circshift() function: