Skip to content
"EAAC" redirects here. For the airline, see European Aviation Air Charter.
Not to be confused with MPEG-4 SLS, which is branded AAC-HD. 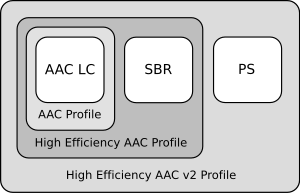 The progenitor of AAC-HE was developed by Coding Technologies by combining MPEG-2 AAC-LC with a proprietary mechanism for spectral band replication (SBR), to be used by XM Radio for their satellite radio service. Subsequently, Coding Technologies submitted their SBR mechanism to MPEG as a basis of what ultimately became AAC-HE.

Testing indicates that material decoded from 64 kbit/s AAC-HE does not quite have similar audio quality to material decoded from MP3 at 128 kbit/s using high quality encoders.[10][11][12][13] The test, taking bitrate distribution and RMSD into account, is a tie between mp3PRO, AAC-HE and Ogg Vorbis.

In 2011, a public listening test[14] comparing the two best-rated AAC-HE encoders at the time to Opus and Ogg Vorbis indicated statistically significant superiority at 64 kbit/s for Opus over all other contenders, and second-ranked Apple's implementation of AAC-HE as statistically superior to both Ogg Vorbis and Nero AAC-HE, which were tied for third place.

MPEG-2 and MPEG-4 AAC-LC decoders without SBR support will decode the AAC-LC part of the audio, resulting in audio output with only half the sampling frequency, thereby reducing the audio bandwidth. This usually results in the high-end, or treble, portion of the audio signal missing from the audio product.

Orban Opticodec-PC Streaming and File Encoders were the first commercially available encoders supporting AAC-LC/AAC-HE back in 2003. They are now deprecated and replaced with StreamS Encoders from StreamS/Modulation Index with many more features, including support xAAC-HE/Unified Speech and Audio Coding. They are now in use at some of the largest content providers, and are considered to be the standard of the industry for live encoding.

Sorenson Media’s Squeeze Compression Suite includes an AAC-HEv1 encoder and is available for macOS as well as Windows.

Die Plattenkiste and Winamp Pro also supports ripping music to AAC-HE. Using a transcoding plugin for Winamp's media library, any file can be transcoded to AAC-HE.[19]

XLD, a macOS audio encoding program, offers encoding from any of its supported formats to AAC-HE.

Nokia PC Suite may encode audiofiles to eAAC+ format before transmitting them to mobile phone.

AAC-HE v1 and v2 encoders are provided by the Fraunhofer FDK AAC library in Android 4.1 and later versions.[20]

AAC-HE is supported in the open source FAAD/FAAD2 decoding library and all players incorporating it, such as VLC media player, Winamp, foobar2000, Audacious Media Player, SonicStage and Die Plattenkiste.

The Nero AAC Codec supports decoding HE and HEv2 AAC.

AAC-HE v2 decoders are provided in all versions of Android.[20] Decoding is handled by Fraunhofer FDK AAC since Android version 4.1.

AAC-HE is marketed under the trademark aacPlus by Coding Technologies and under the trademark Nero Digital by Nero AG. Sony Ericsson, Nokia and Samsung use AAC+ to label support for AAC-HE v1 and eAAC+ to label support for AAC-HE v2 on their phones. Motorola uses AAC+ to indicate AAC-HE v1 and "AAC+ Enhanced" to indicate AAC-HE v2.[citation needed]

Companies holding patents for AAC-HE have formed a patent pool administered by Via Licensing Corporation[27] to provide a single point of license for product makers.

Patent licenses are required for end-product companies that make hardware or software products that include AAC-HE encoders and/or decoders.[28] Unlike the MP3 format before April 23, 2017,[29] content owners are not required to pay license fees to distribute content in AAC-HE.

The following is the summary of the different versions of AAC-HE: