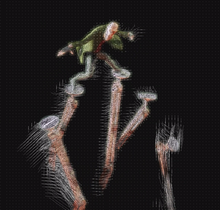 Visualization of MPEG block motion compensation. Blocks that moved from one frame to the next are shown as white arrows, making the motions of the different platforms and the character clearly visible.

Motion compensation is an algorithmic technique used to predict a frame in a video, given the previous and/or future frames by accounting for motion of the camera and/or objects in the video. It is employed in the encoding of video data for video compression, for example in the generation of MPEG-2 files. Motion compensation describes a picture in terms of the transformation of a reference picture to the current picture. The reference picture may be previous in time or even from the future. When images can be accurately synthesized from previously transmitted/stored images, the compression efficiency can be improved.

Motion compensation is one of the two key video compression techniques used in video coding standards, along with the discrete cosine transform (DCT). Most video coding standards, such as the H.26x and MPEG formats, typically use motion-compensated DCT hybrid coding,[1][2] known as block motion compensation (BMC) or motion-compensated DCT (MC DCT).

Motion compensation exploits the fact that, often, for many frames of a movie, the only difference between one frame and another is the result of either the camera moving or an object in the frame moving. In reference to a video file, this means much of the information that represents one frame will be the same as the information used in the next frame.

Using motion compensation, a video stream will contain some full (reference) frames; then the only information stored for the frames in between would be the information needed to transform the previous frame into the next frame.

In MPEG, images are predicted from previous frames (P frames) or bidirectionally from previous and future frames (B frames). B frames are more complex because the image sequence must be transmitted and stored out of order so that the future frame is available to generate the B frames.[3]

After predicting frames using motion compensation, the coder finds the residual, which is then compressed and transmitted.

In global motion compensation, the motion model basically reflects camera motions such as:

It works best for still scenes without moving objects.

There are several advantages of global motion compensation:

MPEG-4 ASP supports GMC with three reference points, although some implementations can only make use of one. A single reference point only allows for translational motion which for its relatively large performance cost provides little advantage over block based motion compensation.

Moving objects within a frame are not sufficiently represented by global motion compensation. Thus, local motion estimation is also needed.

Block motion compensation (BMC), also known as motion-compensated discrete cosine transform (MC DCT), is the most widely used motion compensation technique.[2] In BMC, the frames are partitioned in blocks of pixels (e.g. macro-blocks of 16×16 pixels in MPEG). Each block is predicted from a block of equal size in the reference frame. The blocks are not transformed in any way apart from being shifted to the position of the predicted block. This shift is represented by a motion vector.

To exploit the redundancy between neighboring block vectors, (e.g. for a single moving object covered by multiple blocks) it is common to encode only the difference between the current and previous motion vector in the bit-stream. The result of this differentiating process is mathematically equivalent to a global motion compensation capable of panning. Further down the encoding pipeline, an entropy coder will take advantage of the resulting statistical distribution of the motion vectors around the zero vector to reduce the output size.

It is possible to shift a block by a non-integer number of pixels, which is called sub-pixel precision. The in-between pixels are generated by interpolating neighboring pixels. Commonly, half-pixel or quarter pixel precision (Qpel, used by H.264 and MPEG-4/ASP) is used. The computational expense of sub-pixel precision is much higher due to the extra processing required for interpolation and on the encoder side, a much greater number of potential source blocks to be evaluated.

The main disadvantage of block motion compensation is that it introduces discontinuities at the block borders (blocking artifacts). These artifacts appear in the form of sharp horizontal and vertical edges which are easily spotted by the human eye and produce false edges and ringing effects (large coefficients in high frequency sub-bands) due to quantization of coefficients of the Fourier-related transform used for transform coding of the residual frames[4]

Further, the use of triangular tiles has also been proposed for motion compensation. Under this scheme, the frame is tiled with triangles, and the next frame is generated by performing an affine transformation on these triangles.[5] Only the affine transformations are recorded/transmitted. This is capable of dealing with zooming, rotation, translation etc.

Variable block-size motion compensation (VBSMC) is the use of BMC with the ability for the encoder to dynamically select the size of the blocks. When coding video, the use of larger blocks can reduce the number of bits needed to represent the motion vectors, while the use of smaller blocks can result in a smaller amount of prediction residual information to encode. Other areas of work have examined the use of variable-shape feature metrics, beyond block boundaries, from which interframe vectors can be calculated.[6] Older designs such as H.261 and MPEG-1 video typically use a fixed block size, while newer ones such as H.263, MPEG-4 Part 2, H.264/MPEG-4 AVC, and VC-1 give the encoder the ability to dynamically choose what block size will be used to represent the motion.

Overlapped block motion compensation (OBMC) is a good solution to these problems because it not only increases prediction accuracy but also avoids blocking artifacts. When using OBMC, blocks are typically twice as big in each dimension and overlap quadrant-wise with all 8 neighbouring blocks. Thus, each pixel belongs to 4 blocks. In such a scheme, there are 4 predictions for each pixel which are summed up to a weighted mean. For this purpose, blocks are associated with a window function that has the property that the sum of 4 overlapped windows is equal to 1 everywhere.

Studies of methods for reducing the complexity of OBMC have shown that the contribution to the window function is smallest for the diagonally-adjacent block. Reducing the weight for this contribution to zero and increasing the other weights by an equal amount leads to a substantial reduction in complexity without a large penalty in quality. In such a scheme, each pixel then belongs to 3 blocks rather than 4, and rather than using 8 neighboring blocks, only 4 are used for each block to be compensated. Such a scheme is found in the H.263 Annex F Advanced Prediction mode

In motion compensation, quarter or half samples are actually interpolated sub-samples caused by fractional motion vectors. Based on the vectors and full-samples, the sub-samples can be calculated by using bicubic or bilinear 2-D filtering. See subclause 8.4.2.2 "Fractional sample interpolation process" of the H.264 standard.

In video, time is often considered as the third dimension. Still image coding techniques can be expanded to an extra dimension.

JPEG 2000 uses wavelets, and these can also be used to encode motion without gaps between blocks in an adaptive way. Fractional pixel affine transformations lead to bleeding between adjacent pixels. If no higher internal resolution is used the delta images mostly fight against the image smearing out. The delta image can also be encoded as wavelets, so that the borders of the adaptive blocks match.

2D+Delta Encoding techniques utilize H.264 and MPEG-2 compatible coding and can use motion compensation to compress between stereoscopic images.

In 1974, Ali Habibi at the University of Southern California introduced hybrid coding,[10][11] which combines predictive coding with transform coding.[7][12] However, his algorithm was initially limited to intra-frame coding in the spatial dimension. In 1975, John A. Roese and Guner S. Robinson extended Habibi's hybrid coding algorithm to the temporal dimension, using transform coding in the spatial dimension and predictive coding in the temporal dimension, developing inter-frame motion-compensated hybrid coding.[7][13] For the spatial transform coding, they experimented with the DCT and the fast Fourier transform (FFT), developing inter-frame hybrid coders for both, and found that the DCT is the most efficient due to its reduced complexity, capable of compressing image data down to 0.25-bit per pixel for a videotelephone scene with image quality comparable to an intra-frame coder requiring 2-bit per pixel.[14][13]